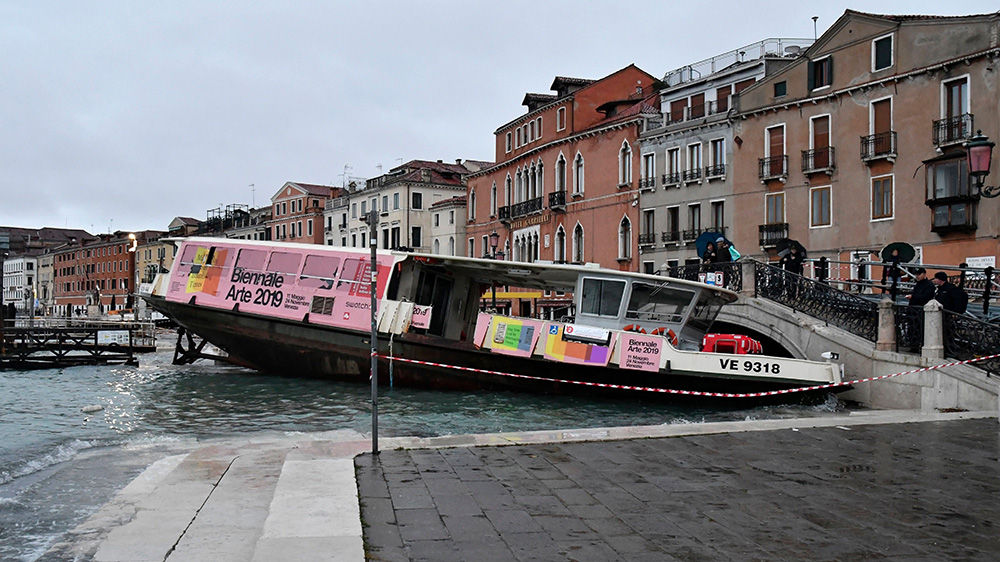 A week of historic rains has Venice reeling. The worst rain storm in 50 years has triggered such severe flooding that many of the tourist mecca’s many cultural institutions, including the Venice Biennale, have had to temporarily close up shop.

On Wednesday, the venerable art fair, which is schedule to run through November 24, was forced to temporarily shut down after water levels in the Italian city reached their highest point in 50 years, organizers announced. (The fair has since reopened.) The move came just one day after the city’s mayor, Luigi Bragnaro, declared a state of emergency for the capital of the Veneto region.

“Venice is on its knees,” he was quoted as saying by Reuters. “The damage will run into hundreds of millions of euros.” Later, in a video posted to Twitter, he added: “This is the result of climate change.”

Water levels peaked at 74 inches on Wednesday—at which point 80 percent of the city was under water—the second highest recorded mark ever recorded in Venice (the previous record of 76 inches was set in 1966), according to Reuters. The flooding caused all 11 city institutions to shutter for the day. Privately operated organizations, such as the Peggy Guggenheim Collection and the Pinault Collection’s Punta della Dogana and Palazzo Grassi, also closed.

Thus far, the flooding appears to have spared the artwork in the biennial’s main exhibitions in Giardini and Arsenale, but the same can’t be said for other institutions around the city, according to artnet News. Most notably, Saint Mark’s Basilica has flooded for only the sixth time in its 1,200-year history, though its now happened four times over the last 20 years. The cathedral has reportedly suffered major damage, including to its medieval mosaic floors.

“The Basilica is suffering structural damage because the water has risen and so it’s causing irreparable damage,” said Venice Archbishop Francesco Moraglia. “I have never seen anything like it. Venice is a wounded city, but it can’t keep on being wounded every year in the same way.”

With conditions only expected to worsen, the Italian government declared a state of emergency for the entire region on Thursday.

On Wednesday, as waters rose, Prime Minister Giuseppe Conte wrote in a Facebook post that the government would “accelerate” building structural defenses for the city. He specifically highlighted the decades-old Mose project, a multi-billion dollar hydraulic barrier system that’s been delayed countless times by cost issues and corruption.

While most of the city’s museums remained closed on Thursday, the reopened biennale has pledged to stay open every day until its scheduled end date, but has set up a web page for visitors to check its status during the flooding.