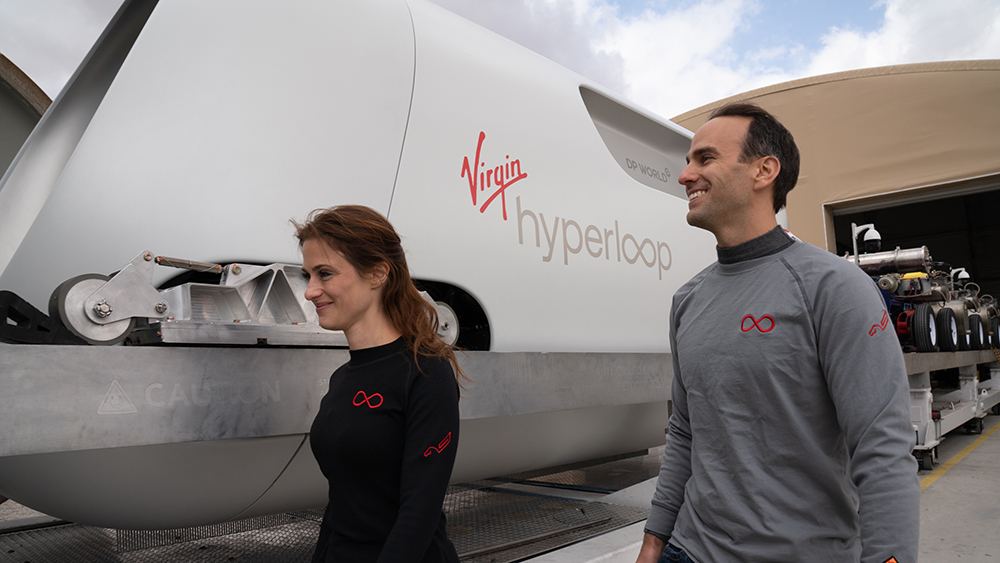 Forget the day of rest. Virgin Hyperloop says it made transportation history on Sunday when it tested human travel in a lightning-quick hyperloop pod for the first time.

The milestone was achieved at the company’s DevLoop test site in the desert of Las Vegas, Nevada. The track, which measures roughly 1,640 feet (500 meters), has previously run more than 400 tests but this was the only one to have passengers.

The first people to ride were two of Virgin Hyperloop’s executives: co-founder and chief technology officer, Josh Giegel, and head of passenger experience, Sara Luchian. The guinea pigs made the maiden voyage in a two-seat XP-2 pod, dubbed Pegasus, to test the safety and speed of the system. It managed to soar down the test track in just 15 seconds, reaching speeds of about 100 mph (160 km), according to the company.

The XP-2 passenger pod, which was penned by the famed Danish architect Bjarke Ingels’s firm BIG and Kilo Design, will eventually seat up to 28 people and may hit speeds as high as 600 mph. That’s all thanks to Virgin’s nifty technology, which uses electric propulsion and magnetic levitation to propel the pods through a large vacuum tube, similar to the Shinkansen of Japan.

“With today’s successful test, we have shown that this spirit of innovation will in fact change the way people everywhere live, work, and travel in the years to come,” Richard Branson, founder of the Virgin Group, said in a press release.

Indeed, should the zero-emissions transit system hit those touted speeds passengers could travel the majority of the distance between New York City and Chicago in just one hour. Of course, it will probably be some years before the public can jump aboard. No government has yet awarded a contract for the building of a hyperloop system. It is also difficult to determine exactly how much it would cost, but it’s likely in the billions.

Still, the weekend’s successful demonstration, which was overseen by the industry-recognized Independent Safety Assessor (ISA), proved Virgin’s hyperloop system is poised to work for humans.

“With today’s passenger testing, we have successfully answered this question, demonstrating that not only can Virgin Hyperloop safely put a person in a pod in a vacuum environment, but that the company has a thoughtful approach to safety which has been validated by an independent third party,” said Jay Walder, CEO of Virgin Hyperloop.

Of course, Virgin isn’t alone in its pursuit of hyperloop speed. Ever since Tesla CEO Elon Musk floated the idea in his “alpha paper” in 2013, there have been numerous designs and prototypes from many different outfits. In fact, the Tesla and SpaceX CEO’s own hyperloop venture, the Boring Company, is currently testing systems in Las Vegas and California.

On Sunday, Virgin took a big step towards realizing its hyperloop dream. Your move, Elon.