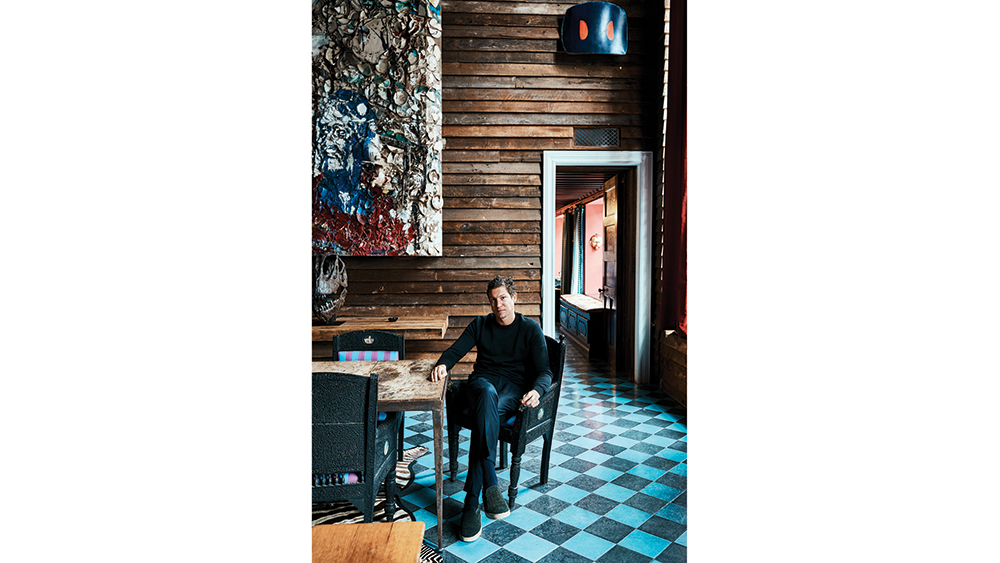 Vito Schnabel, son of the famed artist and filmmaker Julian Schnabel, curated his first art exhibition when he was all of 16 years old and soon after helped revive the career of Ron Gorchov, known for his curved canvases, with a solo show. Since then, he has opened eponymous galleries in St. Moritz and New York’s West Village, with a multigenerational program including Laurie Anderson, Tom Sachs and Ariana Papademetropoulos. In February, he unveiled a second Manhattan location, a 5,000-square-foot, two-level space on West 19th Street, in Chelsea. “I think it’s the right time,” Schnabel says. “A lot of things are closing in New York, and I’m proud to be opening something. I’m excited for the world to come back. It’s important to me to keep things moving in the right direction.”

I’ve actually discovered a few artists I’ve ended up working with through Instagram, like Robert Nava. Andrea Schwan [Schnabel’s PR maven] posted a drawing of his. I’d heard his name, but that was the first time I really reacted. I got Robert on the phone maybe 24 hours after that.

Since I’m about 12 years old, I’d say my Nike Air Force 1s. I continue to wear them religiously, with a suit or blue jeans, sweatpants. I have quite a few pairs. More than I’d want to admit.

Bruno Bischofberger, who is a Swiss gallerist. He brought many American artists to Europe for the first time, from Dan Flavin to Warhol to Jean-Michel Basquiat. The space I have in St. Moritz actually used to belong to him, and I took it over six years ago. He’s been a mentor to me. He’s just a well of knowledge.

My sister Stella has an incredible eye for design. She has a store, and she very rarely sends me something that I don’t think is incredible. I love cars, and my friend Enrique Murciano, who’s absolutely not a car dealer, does help me. I run everything by him that has to do with wheels.

There’s a Man Ray painting from 1947 called Non-Abstraction, which is incredibly special and hasn’t been shown publicly in over 50 years and I’m excited to include in my Man Ray/Picabia exhibition. Every time I look at it, I pinch myself that it’s hanging in my home.

And the most recent thing you regret not buying?

A small drawing by Francis Picabia, a landscape that he made when he was about 20 years old and not so representative of what he ended up painting but something that I think is beautifully done. I just didn’t do it and I regret it. But things have a way of coming back around.

The people who started the Row are friends of mine. I curated the artwork that’s in their stores, and in exchange they sometimes hook me up with some beautiful clothes.

What do you most regret?

Not spending enough time with my grandmother before she passed. She passed away two days before my first marathon. I ran it for her. She was an incredible woman: the first woman to fly a helicopter over the English Channel. She was a pilot and nurse in World War II. She died at 104.

I like to drive. I was driving before I had a license. I was 14, stealing my mother’s car. She caught me because the garage one time ratted me out, but I never got into an accident, knock on wood. She was pretty cool about it.

Which are your regular tables in London, New York and LA?

New York, it’s Carbone and F&F Pizzeria in Brooklyn, which I think is the best pizza in the country. LA: Madeo and Sushi Park. David Tang was a friend of mine, and I always loved eating with him at his restaurant China Tang in London.

I do not wear a watch, but I do have a Patek that my grandfather left for me, which is beautiful, and I look at it every day. It’s in my bedroom. I have a little curiosity cabinet with everything from a sculpture that I made when I was 12 to my father’s father’s money clip from when he was in his 40s—my treasures that are personal to me.

I’m pretty happy being 34. I don’t think I would want to stay the same age. It’s nice to see how life changes.

My mother. She’s smart, honest, hardworking, very loving, and she always shoots me straight. She was the first person who really believed in me. I started so young and didn’t go to college. My father was pretty disappointed, but I knew what I wanted to do. Knowing I had her in my corner meant a lot to me.

There’s one car I remember going surfing in with my father a lot when I was a kid. It was a 1976 Cadillac Eldorado, a convertible, and we’d stick the boards in the back. He had gotten it from my uncle, who passed. We had these fun, beautiful moments going to check out the surf, so it was like he lived on. My dad always loved that car.

There’s a car that I bought myself on the occasion of my 30th birthday, which I like quite a bit. It’s a [Ferrari] 328 from the year I was born.

I have a bunch of letters from Rene Ricard. He was one of my favorite poets and painters, and he was one of my best friends. In the last year of his life, we had a little falling-out. We made up in the end, but when we had that time away from each other, he left a few letters at my house, and they’re really beautiful. I look at them quite a bit.

Both. All the time.