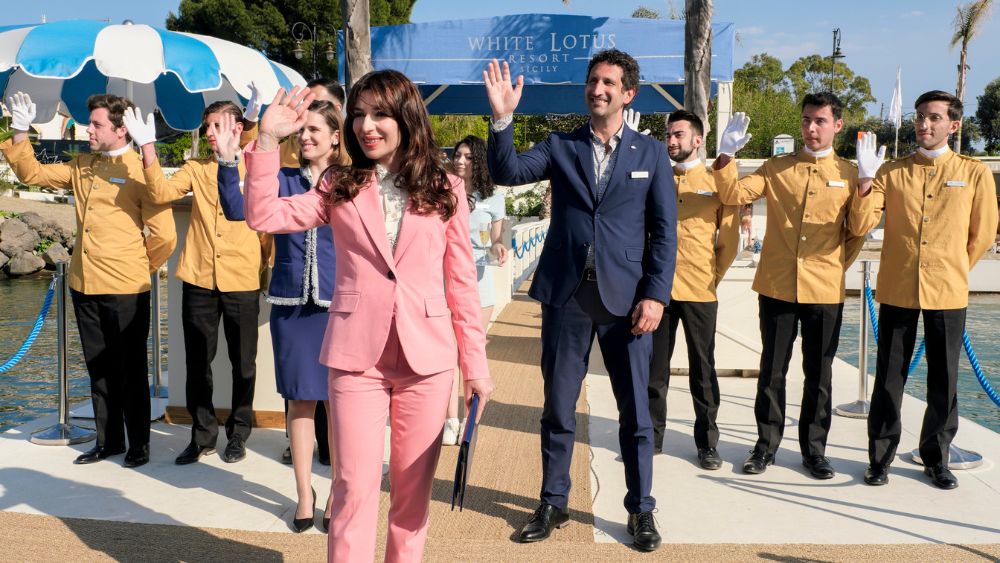 The second season of HBO’s The White Lotus ended on as shocking a note as any whodunnit could. And yet, we still didn’t see it coming. Tanya (Jennifer Coolidge) takes a tragic slip off the side of a yacht and falls to her death. Her corpse is discovered in the Ionian Sea the next day by Daphne (Meghann Fahy), along with the bodies of the captors she murdered in order to escape. Hey, at least Tanya went out guns blazing. Although, she really should’ve taken her heels off first.

Just like the first season, White Lotus creator and showrunner Mike White had audiences engrossed in epic landscapes (Hawaii then Sicily), and also entangled in the complex web of characters he created. Who knew that by the end of this installation, we’d all be rooting for a pair of scheming escorts? As it turns out, troubled and ultra-rich vacationers are his specialty, and audiences want nothing more than to see these elites get played. And boy did they.

Now that fans are done theorizing about the finale, there’s only one question that remains: where in the world will White take us next? Speculation around season three of White Lotus has already started. Fans are dissecting every morsel of information that the writer and director has given thus far. When will it come out? Who will be in the cast? What will it be about? Here, we break down everything you need to know about the upcoming season.

Is There Going to Be a Season 3 of The White Lotus?

Yes! HBO officially renewed The White Lotus for a third season back in November. You can expect a change of scenery and an ensemble of new characters. According to the network, the anthology series will return with a fresh set of vacationers checking into another White Lotus hotel.

“Reflecting on The White Lotus humble, run-and-gun origin as a contained pandemic production, it’s impossible not to be awestruck by how Mike orchestrated one of the buzziest and most critically acclaimed shows,” Francesca Orsi, executive vice president of HBO Programming and head of HBO drama series and films, said in a press statement. “And yet, he’s only continued to reach new heights in season 2, which is the ultimate testament to Mike’s raw, unparalleled vision. His courage to explore the uncharted waters of the human psyche, paired with his signature irreverent humor and buoyant directing style, have us all dreaming of more vacation days at the resort we’ve come to adore. We couldn’t be more thrilled to get the chance to collaborate on a third season together.”

The White Lotus Season 3 Release Date: When Will It Air?

Filming for season three has yet to begin. As for when it will premiere, nobody knows. But we’ll make our best guess. The first season of The White Lotus made its debut back in July 2021. The second installment aired a little over a year later in October 2022. So, it’s possible we’re looking at a late 2023 or early 2024 release date. Theo James recently told Rolling Stone that the cast spent about six months in Sicily filming season two, so there’s at least some sort of timeline for production.

The White Lotus Season 3 Location: Will It Be Japan or the Maldives?

“Next year, the Maldives!” Whether Daphne was joking when she suggested visiting the South Asian archipelago for another contentious couple’s retreat, we’ll have to wait and see. But for now, she might not have been far off. White told Robb Report sister site Deadline that Asia isn’t off the table for season three after season one took place in Hawaii and season two was based in Italy. “I think it’d be fun to maybe go to a whole different continent. You know, we did Europe, and maybe Asia, something crazy like that, that would be fun.”

More recently, a source close to the creator spoke with Los Angeles magazine and not-so-subtly hinted that there’s a good chance the next season could be set in Japan—or even Kyoto, specifically. “Mike really wants to set it in Japan,” said the source. “He’s trying to figure this out. It might not work, but definitely Asia.”

While it’s not confirmed, it’s safe to assume that another, real-life Four Seasons property will act as the White Lotus. The hotel chain’s Maui and Taormina hotels were used as the filming locations for the previous installments.

The White Lotus Season 3 Story: What Will Happen?

As for what’s in store for season three, we’re short on specifics, but, thankfully, White did offer up some details on the potential theme in an exclusive clip for HBO. “The first season kind of highlighted money, and then, the second season is sex. And I think the third season it would be maybe a kind of satirical and funny look at death and eastern religion and spirituality. And it feels like it could be a rich tapestry to do another round at White Lotus.”

White also hinted that parts of season two could carry over into the third. Namely, the murder-for-hire plot involving Greg (Jon Gries), Tanya’s husband, and Portia (Haley Lu Richardson), her assistant, who was only starting to put the pieces together. “I think as far as like, what happens to Greg and the conspiracy of Tanya’s death, it’s possible that I think Portia is scared enough to just leave it alone, but the fact that all of those guys die on the boat, it feels like there’s gotta be somebody who’s gonna track it back down to Greg. But maybe you’ll have to wait to find out what happens.”

You can hear all of White’s thoughts on The White Lotus season two finale below.

If you recall, Coolidge and Greis’s characters were the only links between seasons one and two, so we wouldn’t be all that surprised if they reappeared in the third iteration. Although, it’s unclear if there are plans for Coolidge to reprise her role in any capacity, you know, given Tanya’s tragic death. If White does opt to continue the storyline, that means there’s a chance Portia could return, too.

And to that point, there’s even potential for Michael Imperioli to appear again. The Sopranos actor told Esquire that during a recent conversation with the showrunner White remarked: “Who knows, maybe there’ll be another White Lotus season where Dominic comes with his wife and they patch it all up!”

Finally, don’t rule out the reappearance of another White Lotus vet: Earlier this year, White reportedly told season one star Connie Britton that her character, Nicole, could return to the show. “He wanted me to be in the second season, and there was an idea that I loved for the character,” Britton told Deadline. “Our intention is to do it in the third season. A piece of casting didn’t work in the second season and we’re hoping to [do] that in the third season. I would love to see a spinoff on every character in that show.” If so, Britton’s tightly wound type-A exec could become season three’s Tanya. That’s certainly an intriguing prospect. But hey, a lot can change in a week.

Where to Stream The White Lotus Season 3

When season three of The White Lotus does eventually drop, your best bet is to head to HBO Max where the episodes will be released weekly. In the meantime, you can catch up on seasons one and two of The White Lotus via the streaming app. If you haven’t already subscribed to HBO Max, the platform offers two plans. For those who don’t mind ads, it’ll run you $9.99 per month or $99.99 for the year. If you opt for 4K UHD ad-free streaming, it’ll cost a bit more at $14.99 a month or $149.99 per year. Plus, you can stream the first episode of season one for free through the HBO website. That should be enough to get you hooked.