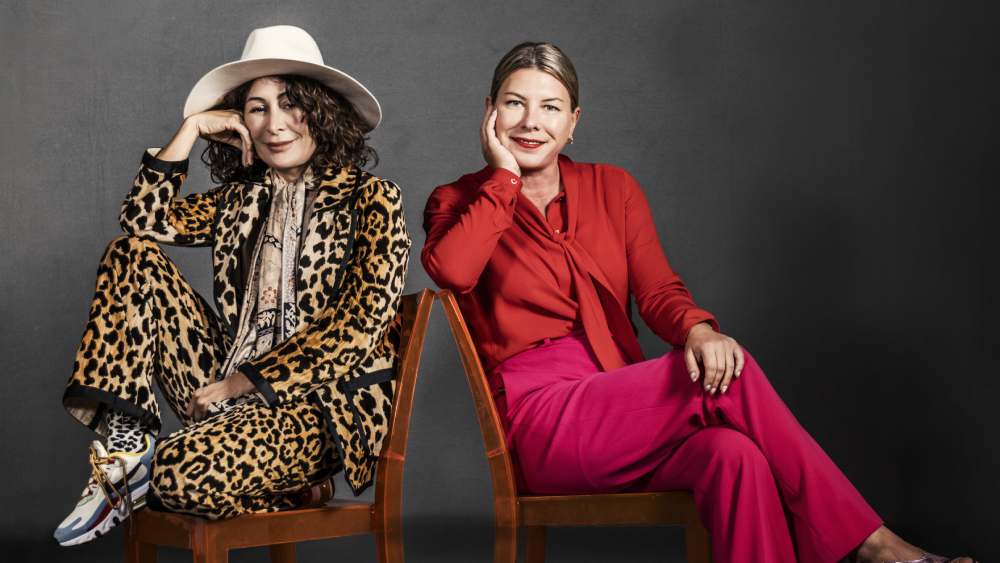 Argentine-born curator Ximena Caminos worked at the Latin American Art Museum of Buenos Aires, known as MALBA, before leaving to establish culture and hospitality company Faena with her ex-husband, Alan Faena, in both Argentina and Miami Beach. Now working as an independent curator, she has also been tapped to run the public art program for Miami’s new Underline park. ¶ Parsons School of Design graduate Kate Fleming began her career in fashion, designing her own handbag collection. After witnessing the impact of climate change firsthand on a trip to Antarctica, she was inspired to found the Bridge Initiative, a nonprofit that connects artists and scientists to create public art for environmental advocacy. ¶ The pair met through friends in South Florida in 2018, and Fleming now sits on the advisory board of Caminos’s ocean-preservation foundation, BlueLab, which is creating the ReefLine, an effort to build the world’s largest artist-designed artificial reef.

“I always say that my biggest gift is to be a bridge [between people]. When I found out that her organization was called the Bridge Initiative, I immediately connected with that.

“She’s a ‘yes’ person—that’s one reason why I started including her in my circle. I can call her out of the blue. Then, yes, she’s there. People that immediately adjust and are flexible? Americans are not like that—they’re much more formal. But I am informal, and I love that about her. She’s so easy.

“She’s a Florida kid. She was brought up surrounded by nature, and so was I. We lived in a house with an old garden, and when we went on vacations, we went to a ranch, a big Argentine farm. As kids, we were out in the wild, and nature was our teacher. For her, it’s similar, and that’s why her heart is in protecting that.

“We are on the same frequency. We resonate very well—sometimes women do that quicker than men. What binds us together is that hive mind, which you can tap into and a very powerful energy flow is liberated. I mainly work with women because of that. I connected to her in a seamless, easy way.

“If she hadn’t had a focus on the environment, we wouldn’t have been friends and I wouldn’t say she was the next me. She was the one who made me question how to take this to the next level, how to make a relevant statement that involved the arts—not just art for art’s sake. She was my guide in things of that field.”