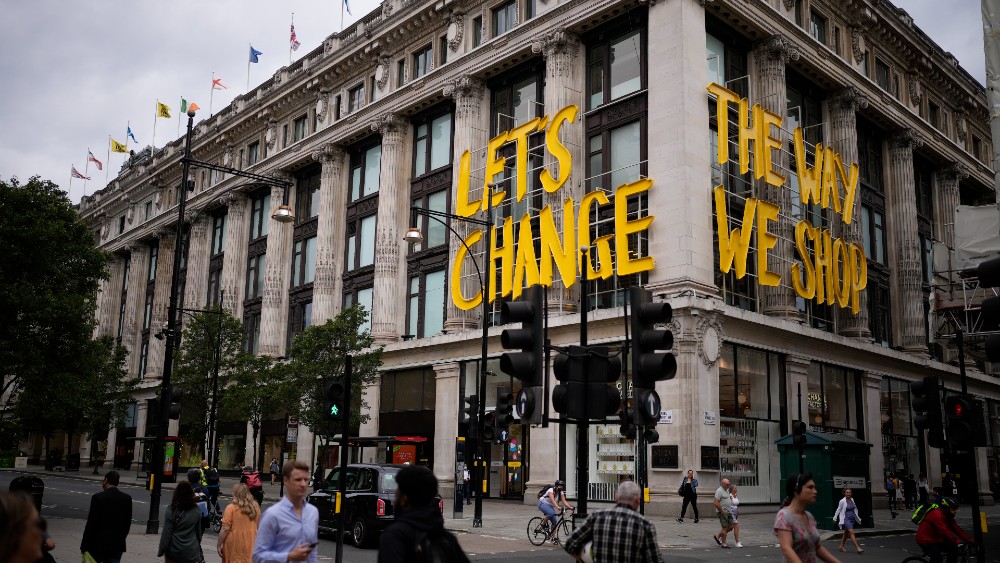 The London luxury department store Selfridges is beloved, buzzy—and, reportedly, on the block. Rumors have swirled for several months that the department store chain, anchored by its 60,000-square-foot flagship in London, has been put up for auction at a price tag of at least £4b billion (around $5.4 billion). It’s currently owned by the Westons, Irish billionaires who have operated the store and its satellites around the UK since taking the group private 18 years ago. And under their auspices, Selfridges has been an odds-beating bright spot as luxury retail has roiled—RIP Barneys, and hello SaksWorks, where rentable desks replace racks of clothes. Store sales remain healthy—up a reported 7 percent in 2020, at £1.97 billion (around $2.66 billion). “It’s an oasis of grandeur and glamour that’s virtually alone,” says author and retail historian Lindy Woodhead. But why has it managed to thrive as its rivals have foundered?

One of Selfridges’ greatest assets is, well, its assets. When the namesake founder decamped for London after helping create the retail temple—and template—of Marshall Field’s in Chicago, he wanted to start from scratch. Not just in life, but also in work. Harry Gordon Selfridges plowed £400,00—the equivalent of more than £23 million today (or around $31 million)—into demolishing a row of buildings on the grubbier end of London’s core shopping strip, Oxford Street, soon after landing in Britain’s capital. In their place, Selfridge built a multistory palace that was designed expressly to house the world’s best department store. His masterpiece opened in 1909, and has remained largely unchanged since.

Note the enormous windows, for example, which were ideal for splashy, attention-grabbing displays aimed at passersby. “It doesn’t feel cramped or cluttered, but very spacious,” notes Woodhead. She worked as a historian for the store and wrote a page-turning biography of the founder that was the basis of a PBS show starring Jeremy Piven. “It’s a retail space that’s part theater, part museum, part shrine and part shop,” she adds. Andrew Smith, the founder of retail consultancy Think Uncommon, agrees. He says the store has become a London landmark. “There’s no difference between going to Big Ben or to Selfridges—it’s stunning, an experience and it’s really interesting.” Toting one of its egg yolk-yellow shopping bags is a rite of passage for Londoners and visitors alike.

Inside, Selfridges is nothing if not theatrical.  Mark Ellwood

Selfridge’s personality is also crucial to its current successes. Even 80 years after he died (virtually penniless), Harry Gordon was an irrepressible cross between PT Barnum and Henri Bendel, with a showman’s flair for stunts—note the sun tanning booth in the skiwear department in the 1920s. “He was the king of show business, and all his mistresses were actresses,” Woodhead explains.

The Weston-era Selfridges retains its founder’s fondness for retail theater, a flourish that too many rival department stores have long since streamlined. There’s a psychic tucked away down in the basement, close to a space that has rotated through a variety of non-selling identities, including a period when it was a soundproofed Silence Room to offer respite for weary shoppers from the rest of the store. You can get married in-store now, should you so wish and it has its own arts cinema onsite.

Think Uncommon’s Smith points to the store’s skate park as another standout, as well as the promotion which offered shoppers the chance to be real-life mannequins for stints in its windows. “Department stores globally have started acting like they’re the prey, and the predator is just round the corner, so they don’t take risks. Selfridges doesn’t act like prey, sitting back nervously. It understands the impact of being fearless, of pushing boundaries,” Smith raves. Since its founding, he notes, the store hasn’t been hemmed-in by British niceties. “It has been a disruptive innovator since it was founded by an arrogant American man who tipped an industry on its head.” One current sign by the customer services desk on the first floor sums it up: it reads Our Home, Your Playground.

Of course, you can also just shop at Selfridges.

Another advantage of this particular store? It was the first mover in so many tropes that define the industry now. Harry Gordon pioneered placing cosmetics on the first floor—catnip for impulse purchases. He also opened that same floor to the street, with plenty of doors from which fragrance could enticingly waft. (Designing that building from the ground up again proved essential.) He added public bathrooms for women when they were a rarity, encouraging customers to dawdle for the day as a result. It remains boundary-pushing today: Current creative director Alannah Weston has been an ardent advocate for sustainability for years. She’s no lecturesome bore, though, per Smith. “Look at the sign on the wall—it says Being naked is the #1 most sustainable option, but option #2 is us,” he laughs, “It’s adorable, makes you giggle and take a photo to share on social media.”

Weston and her family’s vast fortune is no small factor, either, of course. Deep-pocketed chatelaines are notable in an era when similar shops like Barneys New York have been bankrupted by bottom line-chasing owners. Why, then, would the Westons offload their crown jewel? Some observers smell a whiff of a signature Selfridges stunt, a chance to hog attention as the potential sale is discussed. Others, like Lindy Woodhead, point to the recent death of Alannah’s 80-year-old father, Galen, a polo-playing chum of Prince Charles. “Galen was in love with that building, the heritage, the whole concept of Selfridges and what it stood for,” she said. “He saw it as a generational business, but when Galen [died] they took stock. He hoped they would feel the spirit as much as he did—but they don’t.”

Andrew Smith isn’t worried about the store’s future under a different owner, noting that Harrods has thrived against expectations during its current incarnation as a subsidiary of a Qatari investment fund, one of the expected suitors for Selfridges, too. “I can’t wait to see where it goes. Who knows who picks this up—[It] might be a crazy billionaire who wants a fashionable project to take run at.” Any interested parties should step up stat, though, as a £4 billion deal for those Qataris to make Harrods and Selfridges sister stores could be getting closer.