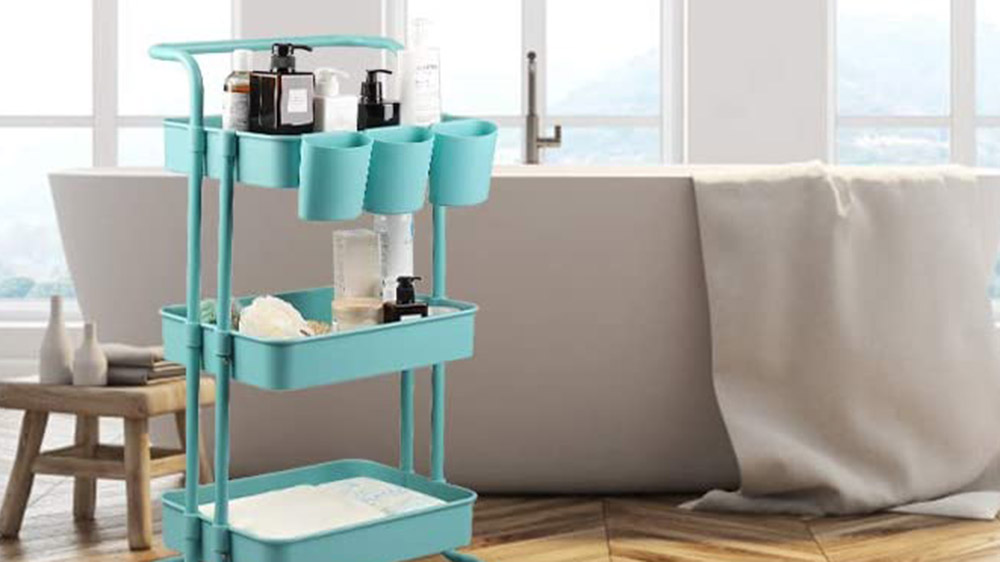 If there’s one thing most of our bathrooms—big or small—could use, it’s more storage. And the easiest way to expand that space is with a trusty, multi-tier bathroom cart.

Your bathroom likely has a medicine cabinet and some counter space, but for a lot of us, that’s just not enough. Sure, you could call a carpenter and have them install some shelving but there’s a much simpler solution available. That is the bathroom cart, a compact item with plenty of space for your toiletries, toilet paper and cleaning supplies. Available in a number of stylish designs and eye-catching colors, just one easy-to-move cart should make your storage woes a thing of the past.

Tired of a lack of storage space in your bathroom? The time is right to invest in a stylish bathroom cart of your very own. Here, four of the best currently available on Amazon.

Bathroom carts don’t get much simpler than this model from Amazon Basics. Featuring three tiers and a set of caster wheels, it offers up an easy way to increase storage space in your bathroom, whether you need more space for beauty supplies, toilet paper or cleaning supplies. While it comes in the usual black and white, it’s also available in the surprisingly playful pink and mint green.

You’d be hard-pressed to find a more feature-packed bathroom cart than Alvorog’s. The brand’s model features three tiers, as well as hanging cups for added space and a partition plate to make organization that much easier. It’s also sturdy, with each tier strong enough to hold up to 66 pounds. Finally, the cart features a removable handle if you don’t intend for it to be stationary.

Bathroom carts are useful but they’re not always built to last. That’s not the case with MDesign’s model, though. The company’s cart is made from strong steel that features a rust-resistant finish that can withstand the steam from even the longest shower. That finish is also easy to clean, requiring little more than a quick wipe down with a damp cloth. But this cart isn’t just tough, it’s also useful thanks to three storage tiers and four caster wheels.

Witacles’s bathroom cart does it all and then some. The brand’s cart, which like other options on this list can be used in rooms other than the bathroom, has plenty of storage space, a surprisingly stylish design and can fold up when it’s not in use. That last option may not seem like much, but ensure will come in handy if you find yourself not needing the cart anymore. And despite being able to fold up, it’s still incredibly strong, as it’s able to 166 pounds. We don’t know what kind of toiletries you have but should be more than enough.