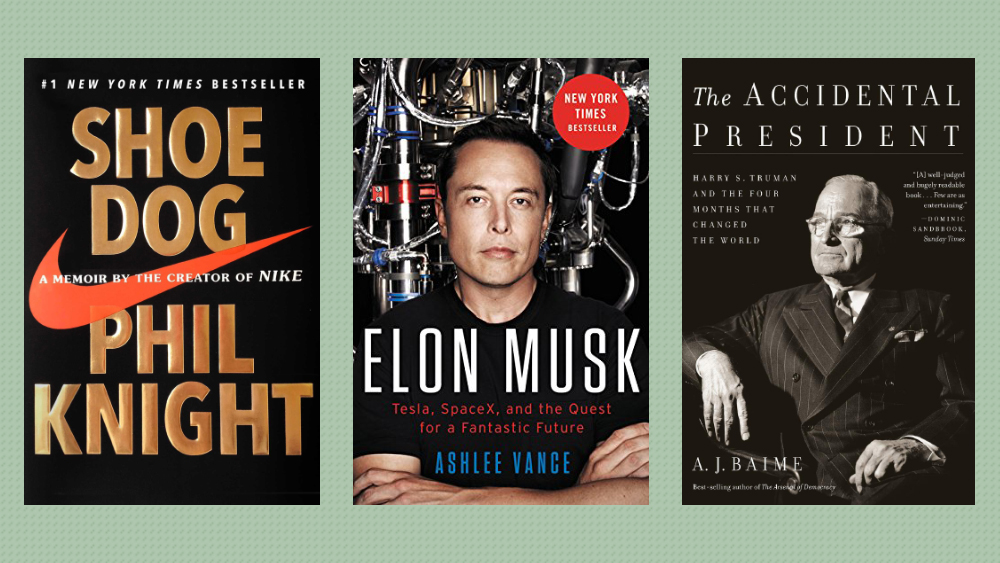 There’s an age-old saying which goes, “Before you judge a man, walk a mile in his shoes.” In effect, it’s a reminder to always be empathetic and understand that an individual’s experiences and adversities irrefutably shape who they become. One of the easiest ways to do this is by reading a memoir or biography. Through these unflinching personal accounts, you can deep-dive into another person’s life and, momentarily, take a break from your own.

So, exactly which books—and whose lives—are worth reading about? It’s truly impossible to list them all, but here are four powerful reads to get you started.

1. Elon Musk: Tesla, SpaceX, and the Quest for a Fantastic Future

This isn’t the first book we’ve seen about Elon Musk and it probably won’t be the last. But it’s the first one that Musk cooperated with—he spent 30 hours with the author—so it’s one of the most detailed (and personal) to date. Penned by veteran technology journalist Ashlee Vance, the bestselling title traces the life of the South African-born entrepreneur, inventor and engineer, from his rough upbringing to his rise as a global business magnate. It delves into his groundbreaking companies—Tesla, SpaceX and SolarCity—and tracks the startling advances the 48-year-old has made regarding electric cars, space exploration and solar energy.

Cons: It was published in 2015, so it may be a little out of date given how quickly the tech world moves.

2. Shoe Dog: A Memoir by the Creator of Nike

One for the sneakerheads, this candid memoir was written by Nike founder and board chairman Phil Knight and gives the inside scoop on the world’s most valuable apparel brand. Knight offers a refreshingly honest account of the company’s beginnings as a disruptive start-up to its evolution into an iconic, billion-dollar brand. The story undulates, shifting between epic fails and major triumphs, all the while Knight remains entirely unfiltered and humble. This beautifully crafted book is perfect for Nike fans or people in business.

Pros: It comes straight from the founder’s mouth and has great entrepreneurship lessons.

Cons: Take all autobiographies with a grain of salt, they invariably include a little self-promotion.

This biography is as just as unexpected as Harry S. Truman’s presidentship. Written by prolific American author and journalist A. J. Baime, it presents a meticulously researched yet warmly human portrait of the unlikely leader who was thrust into the presidency after Franklin D. Roosevelt’s unexpected death. It covers Truman’s first four months in office when he had to take on Germany, Japan, Stalin and the atomic bomb, no less. No other president had ever faced this much adversity in such a short amount of time, and the book does this nail-biting period justice.

Pros: It’s both informative and entertaining.

As one of the country’s most compelling presidents in history, 44th president Barack Obama leads readers through his journey from his early career in politics to the detailing his thoughts on key events that occurred under his leadership, including the use of drones, the global financial crisis, and Operation Neptune’s Spear.

Pros: A deep dive into the former president’s time in the oval office.

Cons: 768 pages may feel a bit daunting for some readers.