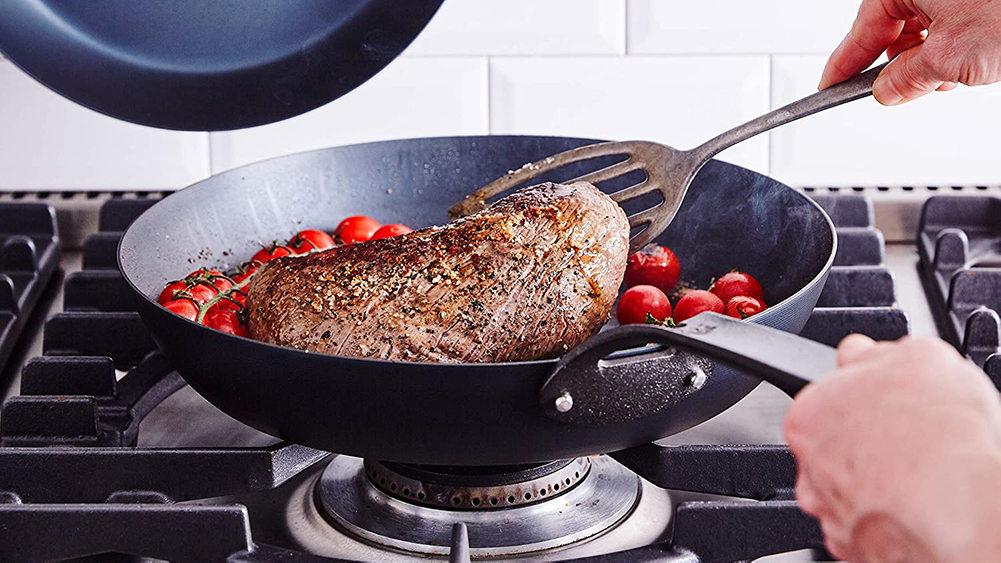 When it comes to cookware, carbon steel is king. Composed of roughly 99 percent iron and one percent carbon, it’s an incredibly durable material, one that heats up quickly and cooks food evenly. That’s why a carbon steel skillet is such a worthy investment.

Carbon steel skillets often get compared to their cast-iron brethren, but they’re the superior pick for a few reasons. For one, they’re stronger and therefore more long lasting than cast iron. For another, a carbon steel skillet can handle even higher temperatures than a cast iron one. Plus, carbon steel is a lighter weight material and it’s (mercifully) nonstick. Just remember to season your new carbon steel cookware before you braise any meat in it, unless it’s pre-seasoned. Otherwise, food will stick and the skillet will be more prone to rust.

A carbon steel skillet is a versatile piece of cookware, too, as it can be heated either in the oven or on the stove top. The only catch? These skillets must be hand-washed in order for them to really last. That said, you can easily use one for years and years without fear of it breaking down. In other words, it’s an investment—so you’ll want to make sure you pick up the right skillet from the start. Here are four of our favorites.

BK Cookware has been making high-quality tools for the kitchen since its originator, Hendrik Berk, invented the enameled steel Dutch oven in 1851. Its carbon steel skillet is a sleek pan with a black iron oxide layer that makes it highly resistant to corrosion or scratches. Its cast-iron handle, meanwhile, is made with rivets, so it’s plenty comfortable.

Mauviel started slinging cookware in France back in 1830 and has a wealth of expertise that shines through in this skillet. Crafted from high-quality carbon steel, the pan can withstand extremely high heat and is ideal for searing meats. It can be used on all cooking surfaces, from gas to induction. It can even be thrown in the oven. The pan is also naturally non-stick and fitted with an iron handle that makes it easy to maneuver.

Though it’s made of carbon steel, De Buyer’s skillet will help you cut down on your carbon footprint. The skillet is handmade in France with all-natural materials, and includes no harmful chemicals. But it doesn’t sacrifice an ounce of its function, as it’s a great pan that’s as durable and nonstick as the rest. Plus, it has two handles, so it will suit many different cooking styles.