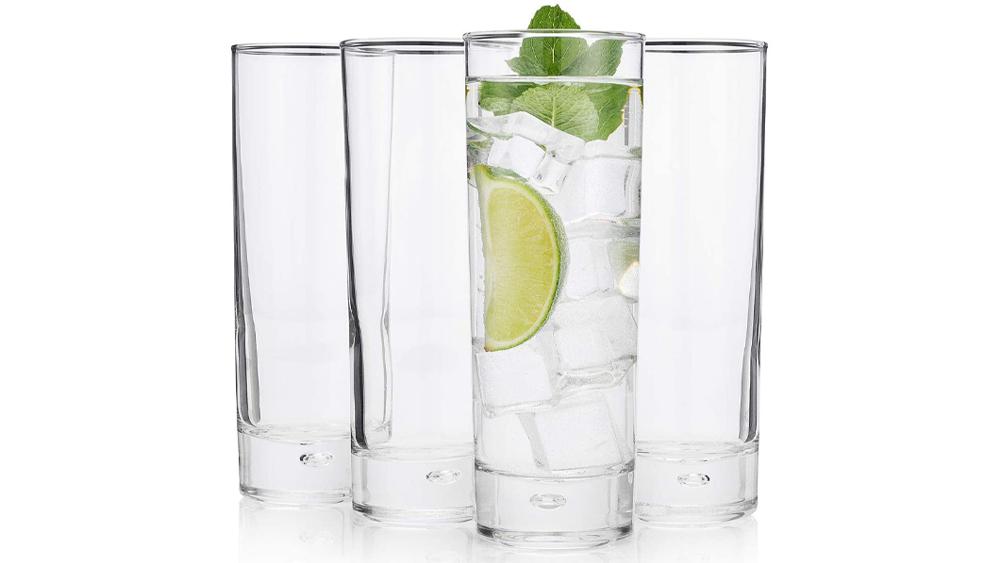 Don’t mistake a Collins glass (full name: Tom Collins) as a mere alternative to the standard highball glass. While non-professional bartenders might think the two styles are interchangeable, the reality is that while they look similar, their subtle distinctions make a world of difference when you’re serving cocktails to your friends and neighbors.

So if you find yourself making palomas, Singapore slings, mojitos or the Tom Collins, for which the glass is named, its best to turn to the appropriate glass. We’ve rounded up four of the best examples from Amazon to help you get cocktail hour off on the right foot.

If you’re just starting to build your barware collection, this set is a good place to start. With four glasses, each with a capacity just shy of 10 ounces, you’ll be able to serve navy grog, St. Germains and various coolers to intimate gatherings. The lightweight glasses feature a weighted base that makes them hard to tip over, and there’s a bubble detail in each that makes a charming touch. Each glass also features a rolled rim that helps the glasses resist chips. Both features make them sturdy enough for everyday use—but their volume isn’t as big as a standard water glass.

Sometimes, what’s simplest really is best. And Stolzle’s set of six glasses boils the essence of the Collins glass down to its essentials. With a slender stance and a capacity of over 14 ounces, you’ll have no trouble fitting as many cubes of ice, spirits and mixers as you want in each one. But don’t let their minimal design fool you: these glasses are made from lead-free crystal, so they’ll shine brilliantly, with a clarity that rivals traditional lead crystal. They’re dishwasher safe and feature a sturdy base, so you may be sipping from them for years to come.

Leave it to Waterford, the world-renowned Irish crystal maker, to produce some of the most appealing Collins glasses you can find. While their diamond pattern—a variant of Waterford’s classic Lismore cutting—might not be for everyone, their secure weight and 13-ounce capacity are sure to make them crowd-pleasers that you’ll reach for again and again. It also helps that they’re made from lead-free crystalline, a safer alternative to traditional crystal. And while you probably should wash these glasses by hand, because they come from such a storied manufacturer, you won’t have any problems replacing broken ones in the future.

If your household is the kind that serves or consumes a quantity of beverages that would make the average bartender blush, this set of six dishwasher safe glasses is for you. Its maker, Schott Zwiesel, is a renowned German glass manufacturer whose patented, thermal-shock resistant Tritan crystal is nearly impervious to scratches, chipping and cracking—even with frequent use. That means you can get a lifetime of wear out of these glasses, which feature an 11-ounce capacity. They don’t have the most distinctive design, but their longevity may mean you won’t mind that so much.