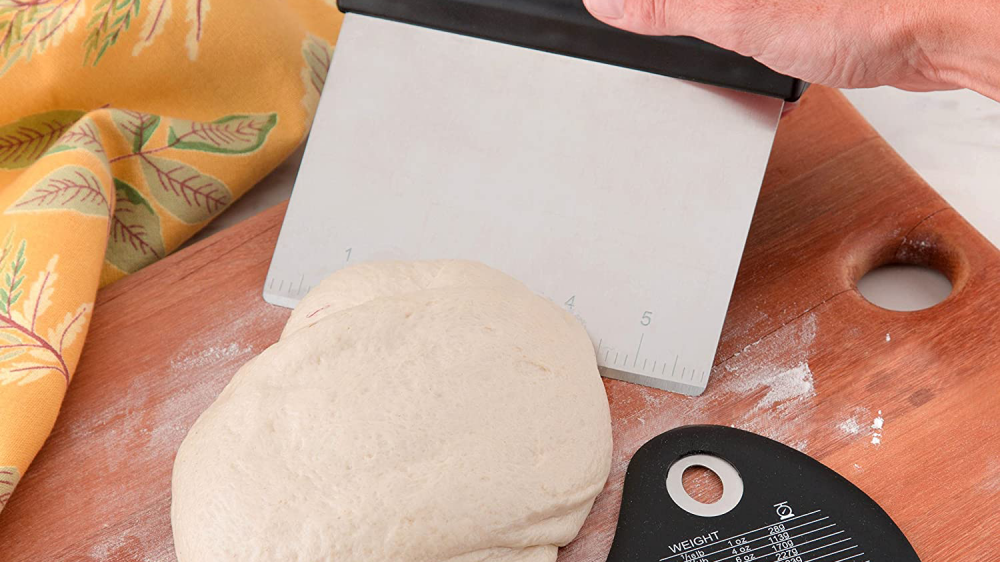 Dough is a necessary ingredient in almost everything you’ll bake. But separating dough and shaping it can be a difficult task because of its elasticity. Fortunately, there’s a tool for that: the aptly named dough cutter. Dough won’t stick to this handy utensil, which is also known as a bench knife or a board scraper, making it a breeze to work with.

The advantages of a dough cutter are many, and they aren’t limited to slicing just dough. The sharp edge can also be used for chopping vegetables, fruits, pies and other baked goods. It can also be used to scrape down and clean a surface after you’re done breaking, whether it’s a countertop or a rolling pin or bowl. You can even use it to pretty up a cake by smoothing out the frosting on top.

The biggest consideration with a dough cutter comes down to the kind of baking you’ll be doing: If you typically work with smaller, more meticulously made pastries, then you may not need as large of a dough cutter. Here are four of the best to choose from that will suit every baker’s needs.

You can use a dough cutter to scrape down a pan, countertop or cutting board after cooking, but bowls can be a bit trickier to clean, as they’re curvier. That’s why Spring Chef included a bowl scraper with its dough cutter—one that’s marked with a handy measurement conversion chart no less. The stainless-steel blade itself is nothing to scoff at either, and can be used to chop grilled chicken, vegetables and other foods, too. It’s also marked with measurements, so you’ll never lose track of how much food you’re making with this duo.

Dough cutters are handy kitchen tools. But they’re also pretty sharp. Because of this it’s important that yours has an ergonomic grip that will keep your fingers from slipping into harm’s way while you’re using it. Dexter-Russell’s does just that, as it has a comfortable polypropylene grip that’s textured, so you won’t lose your grip during cutting. The blade itself is a sturdy stainless steel, and can be use to chop veggies as well as dough. Some may not the like the look of it, though, as it lacks the flair of some other dough cutter designs.

If you’re new to a recipe and want to easily slice dough without too much thought, then Anmarko’s cutter is the one for you. It’s a straightforward dough cutter with a non-slip rubber handle, and a sturdy stainless steel blade. Best of all, it has inch marks along the blade, so you can use it to take measurements while you bake. And if you need something to help scrape pans after you’re through cooking, it can do that too.

Most dough cutters can also be used to lift ingredients and move them from point A to point B. Put some sliced veggies to some stew, add some chopped garlic to a stir fry—the list goes on. Few tackle this task as well as Jsdoin’s cutter, which has a large stainless-steel blade that’s 6 inches long and 5 inches wide. The added surface area makes that much more useful. Plus, since it’s a longer blade, it can cut large chunks of dough at once. Keep in mind that it may not work as well for delicate pastries, plus, it will take up more room in your cabinet.