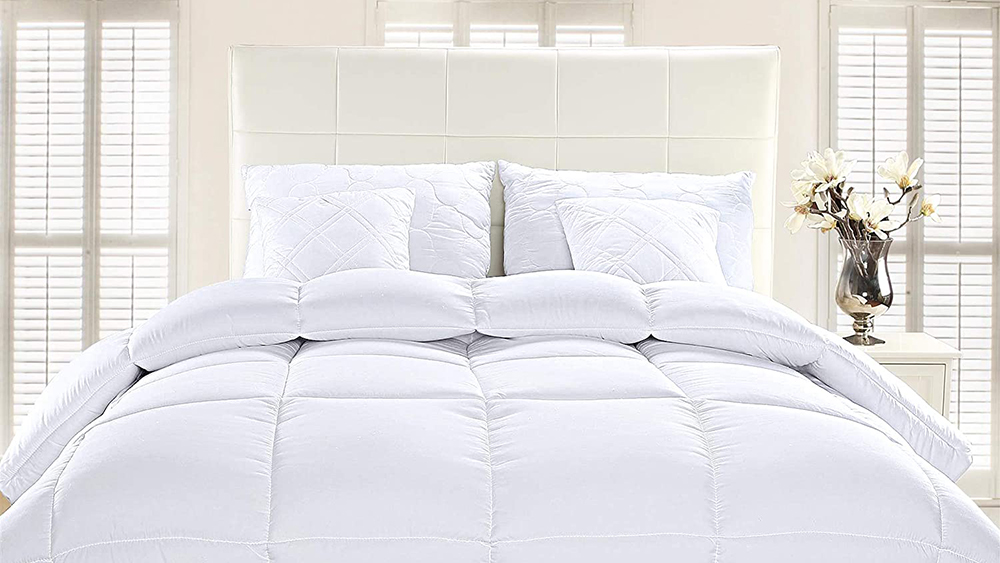 For some, a duvet filled with a down alternative may actually be better than the real thing. That’s because the natural down found under the feathers of geese and ducks can trigger allergies. On the flipside, down alternatives are crafted from synthetic materials such as polyester or rayon, which have hypoallergenic properties and allow sensitive sleepers to breathe more easily.

As you might expect, down alternative duvets mimic all the insulating properties of their natural down counterparts to keep you warm while sleeping. They are arguably more ethical since no animals are involved in the making, and they’re also machine washable for fast and easy cleaning. They’re generally less expensive, too.

We’ve selected four of the best down alternative duvets available on Amazon to ensure you have a sneeze-free slumber every time.

Lavish Comforts down alternative duvet is akin to a plush comforter one would find in a 5-star hotel. It’s filled with premium doubled brushed 1800 series microfiber, which is even softer than Egyptian cotton. In addition to that silky texture, it’s also allergy free and light enough to be used in all seasons. The queen-sized duvet measures 86 inches by 86 inches and also features corner tabs to keep it in place.

Easeland’s down alternative duvet is made from a whole piece of high-end polyfill that renders it both soft and breathable. It is suitable for year-round use and will keep you warm and cozy without causing you to overheat. The fluffy filling also distributes evenly and doesn’t clump together. Like the other picks on this list, it’s hypoallergenic and is great for those who are sensitive to natural down. What’s more, the duvet can be thrown in the washing machine for easy cleaning.

There are few things more frustrating than a comforter that ends up in a ball inside the cover. Thankfully, Linenspa’s down alternative duvet features eight built-in corner and side loops to keep it securely attached to your favorite cover. Inside, it features 100 percent microfiber to keep it soft and warm. It also has a 300 gsm fill weight and can be used in all seasons. Best of all, you can machine wash as needed so the duvet will retain that recently fluffed look.

Like our top pick, Becky Cameron’s luxurious comforter is similar to one you would find in a 5-star hotel. That’s largely thanks to its lightweight filling. Made up of synthetic goose feathers, the down alternative feels just like the real thing but won’t trigger allergies. Built to last, the duvet features durable box-stitched hems that will hold up for years to come. It’s also machine washable for easy cleaning. This particular design fits either a king or California king bed and can be used year round.