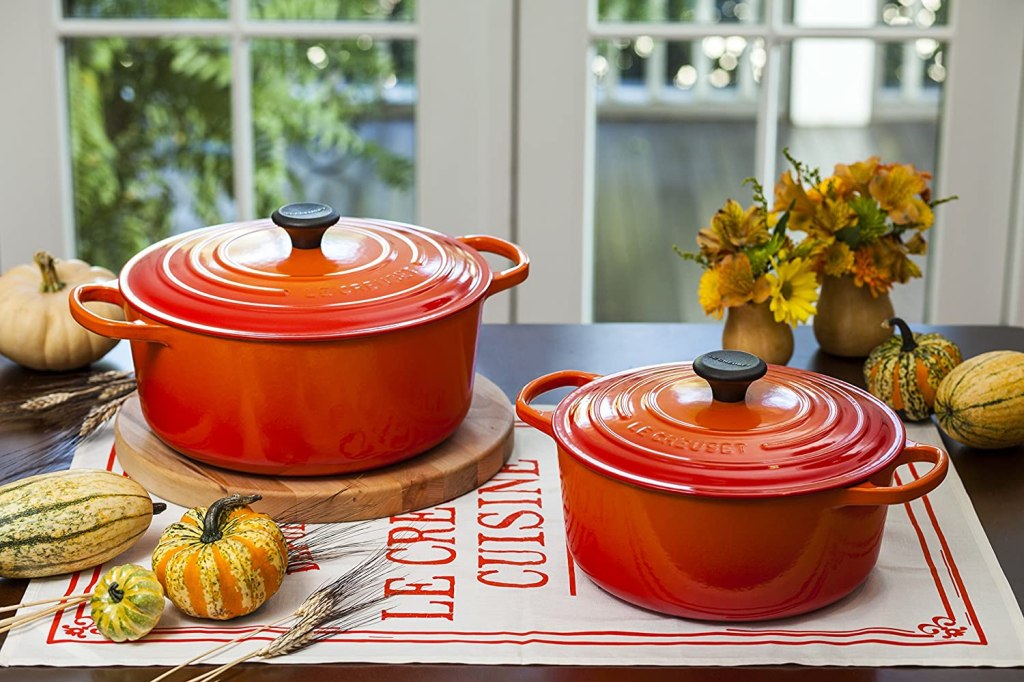 When you reach a certain age, cooking starts to command a more prominent place in your life. As curiosity and palates expand in equal measure, people look to try and recreate fantastic tasting meals from the comfort of their own spaces. More often than not, those meals require a French oven to reproduce.

French ovens are one of the most versatile and more critical tools you can have in your cooking arsenal. The enamel-clad pots have a cast-iron interior that holds up to repeated use while providing unparalleled and even heat distribution throughout, which makes them great for braising cuts of meat, making soups, pasta and more. Plus, that tough construction means they can go from any stovetop to an oven without breaking a sweat.

In use for decades, French ovens will quickly elevate your cooking to a new level and open up your cooking to realms of tasty new possibilities. Here are four of our favorites on Amazon right now.

With its subtle embossed detailing, this Staub French oven is rooted in the storied French culinary culture. The oven’s domed Chisteria lid helps to provide additional basting ability by shifting the spikes, allowing moisture to cascade from the bottom of the lid itself. This method translates to juicy and tender stews and cuts of meat. Even better, its cast-iron construction makes it easy to wipe clean when you’re done with it.

For those just beginning to get accustomed to French ovens, this option from Landhaus is smartly valued, which means you’ll get a lot for a little. At 4.6 quarts, there’s more than enough space for all kinds of stews and roasts, so prepare the fridge for lots of leftovers. Of course, the cast-iron construction means it can be used on the stove and in the oven without worry, but it’s also safe to use on all kinds of surfaces (electric, gas, etc.) without concern. And, as an added bonus, it comes with both a solid-brass and a stainless-steel knob so you can customize it how you’d like.

Pros: Great value buy for those just starting out.

Big cooking jobs call for equally sized pots to match, but it’s safe to say this French oven from Cuisinart more than delivers. A staggering 7 quarts, there’s more than enough room to feed a whole family or two with whatever you plan on whipping up. The handles are wide enough to provide a safe and sturdy grip when pulling and placing the pot in and out of the oven, while the rich enameled exterior is a rich blue that will brighten up any kitchen.

Pros: Lots of room to cook.

Cons: Not every cook will need a pot this large.

For over a century, French brand Le Creuset has been the gold standard for French ovens, as the cookware brand produced the first enameled cast-iron cookware. Long known for its strength and durability, the cast-iron construction helps to retain and evenly distribute heat throughout the pot. The pot feels as good as it looks, between its wide handles and ergonomic lid grip. It’s also light for a French oven, making it easy to move around. If you’re looking for the best of the best, well, you’ve found it.

Pros: Legendary for a reason.

Cons: Shelling out a lot for the brand name.