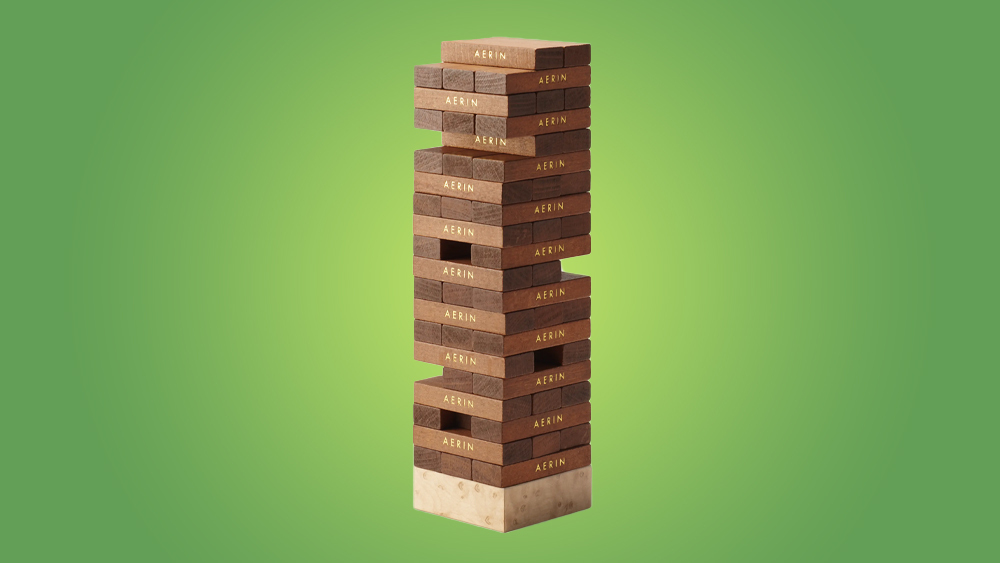 Jenga is a game that requires a good amount of coordination and patience. Some call it tumble tower, others stacking blocks, but the gist remains the same: Rectangle blocks, usually 54 pieces made of wood, are lined in rows of three, with each new level rotating parallel to the last, that are assembled vertically and then gradually removed by each player in turn. It may sound simple enough, but in the hands of fervent Jenga fans, it is the ultimate sign of dexterity.

I’m certainly not one of those people; patience and coordination are two characteristics that I regrettably lack. Still, this hasn’t stopped me from playing rounds of Jenga over the decades, usually after one too many Bombay martinis at a house party. I’ve also tried oversized sets that are made for the open air, this time with a nice cold lager in hand. It’s a game that prompts camaraderie, spirited competition and, simply put, a whole lot of fun.

For what feels like time immemorial—but really since the 1970s, when Oxford Games created the first Jenga set, deriving the name from the Swahili word kujenga, which means “to build”—dismantling a tower of wooden blocks has been a game-night mainstay. Note: “Jenga,” the word, is trademarked, which is why different packages feature different titles. Also, stacking blocks don’t necessarily have to be made of standard wood; some are now made of carbon fiber, stone or lucite in a slew of colorways. A couple of them are so sleek and eye-catching that it’s worth putting them front and center on your coffee table or mantle.

If you have an intimate fête on the horizon, and are need an activity that doesn’t solely involve downing glasses of Bombay, check out the best stacking blocks sets around, including the original Jenga. And no, you don’t have to be good at it to have a ball. Believe me.

As its name suggests, Sunnylife offers colorful items for frolicking in the open air—from bright pool floats to bold beach umbrellas. Its sleek stacking block set, however, is better suited for climate-controlled environments. Made of lucite in both clear and smoky brown tones, the 54 monochromatic blocks will definitely light up any tabletop.

A fan of attention-grabbing colors? Aurosi has just the thing for you. The brand’s stacking blocks set is made of lucite in a striking electric blue—a color that’ll add a jolt to your minimalist decor, or accent your maximalist one.

Here’s the real deal, a genuine Jenga set made by Hasbro, a company that licenses the trademark. It may not have the same flash as others on this list, but if a standard game is what you’re after, this package, folks, is the standard-bearer.

Jenga doesn’t just have to be a tabletop game. This set, one that is 15 times the size of the one above, shows that Jenga can be fun-filled, life-size activity. What’s more, it’s probably the only time many of us will be able to say “timber,” and actually mean it.

Aerin is a label that offers some of the sleekest tabletops, the kinds of pieces that take pride of place on a mantle. Case in point: this 54-piece wooden set, encased in a beautiful shagreen box, that just needs to be shown off.

Bey-Berk is a family-owned company founded in the early ’80s, originally offering clocks and luxury storage boxes. Over the years, the company added travel accessories, nifty home decor items and a whole assortment of games, including this stacking blocks set made of translucent blocks of white, red, or black. It’s so good to look at that it’s a shame to put the tower back in the box.

When it comes to wood furnishings, it’s hard to beat ones made of Canaletto walnut. Indeed, as the Pinetti stacking blocks set showcases, the smooth texture, with its flamed veins in contrasting shades, is certainly something to be admired.

Carbon fiber is a naturally dark gray, lightweight material that can withstand a great deal of wear and tear. To wit: It’s used for aerospace travel. Now, thanks to CarbonByCharlie, you can have a good-looking stacking blocks set that’s as close to indestructible as it gets.

Sandwiched between the original and giant stacking blocks sets is this option from Yard Games. It offers the kind of sizable blocks, made of New Zealand timber, that you can remove with your hands instead of your fingers—but stands at two feet in height, which means you can easily move the pieces around in the handy framed bag it comes in.

Who doesn’t love white marble, really? From the swirls to the bold contrast, it’s no wonder the material is a mainstay in the finest homes. And if your countertops are made of Calacatta, this stacking blocks set from the always-reliable West Elm is right up your alley.

If you’re looking to make stacking blocks even more challenging than it already is, GoSports has a giant 54-piece set with 20 numbered blocks, along with a dry erase board, that’ll essentially prompt a party to come up with its own rule. Maybe odd numbers should be removed first? Maybe blocks should be removed in numerical order? Take your pick.