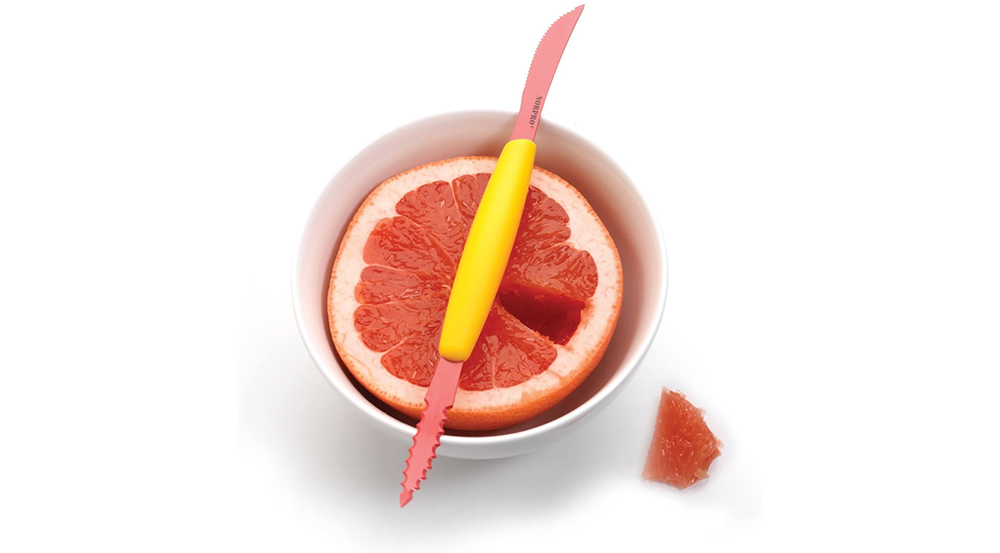 Anyone who’s spent time in the kitchen knows there’s a knife for basically every type of food. Take, for example, the grapefruit, which can be cumbersome to cut with a standard paring knife. That’s why you’ll want to use a grapefruit knife the next time you feel like making a fruit salad.

The grapefruit knife is a small curved blade with two serrated edges that are specifically designed to hug the curves of the fruit. Its tiny saw-like edge can precisely cut through the thick and waxy peel and separate it from the actual fruit itself. While that may not seem like something you need in your kitchen, anyone who’s tried to neatly cut a grapefruit (or orange) without one knows how useful it is.

If grapefruits are a staple of your diet, then it’s time to invest in a dedicated knife. Here are four you’ll want to consider.

After the blade, the handle is the most important part of any grapefruit knife. It needs to support a nice, sturdy grip yet also feel comfortable in the hand. Cuisinart’s grapefruit knife delivers on both fronts. Its soft-grip handle makes it a pleasure to hold, and the knife overall is light enough to keep your hands from tiring when you’re cutting up citrus for a crowd. It has a sharp stainless steel blade that slices through fruit with ease, and (bonus) it’s also dishwasher safe.

Grapefruit knives tend to look one of two ways: old fashioned or toy-like. Not Rösle’s though, which sports a sleek modern look that will turn heads. In addition to a curved blade that features two serrated edges, the cannelle has also been sharpened on both sides to facilitate cleaner cutting. Plus, the German knife’s water-tight handle is perfectly balanced to give you better control over each slice.

One look at Norpro’s bold knife and you’ll know exactly what it’s for. Featuring two serrated blades, one on each side, the knife features a playful yellow and pink color scheme. But as eye-catching as it may be, the knife is most noteworthy for its two blades. Well, actually, make that three, because in addition to the traditional grapefruit cutting blade, it also features a dual blade that better separates the fruit from its interior membranes.

Rada Cutlery’s grapefruit knife looks just like you’d expect one to. There’s no fancy bells and whistles, it just features a simple serrated blade that makes preparing grapefruit a breeze. Made from high-carbon stainless steel, it’s a surgical-grade blade that’s also super durable. It even includes a lifetime guarantee, should you ever need it.