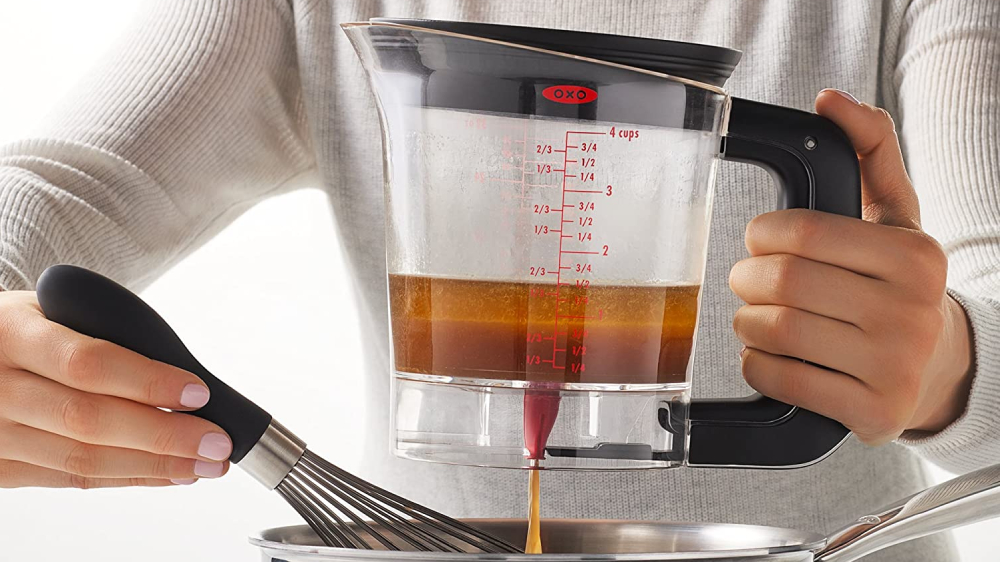 The turkey is prepped and it’s time to make gravy. You have a roasting pan full of delicious juices that are sure to make a flavorful finished product, but there’s one major problem—that liquid gold is mixed in with a whole lot of excess fat. Though it adds considerable flavor, too much fat can prevent you from getting the results you want.

Now you could wait an eternity for it to cool and slowly spoon the fat off the top, but that’s cumbersome and time-consuming. This is the opportunity to break out a gravy separator.

Shaped almost like a measuring cup with a pronounced spout, these brilliant little vessels simultaneously strain the broth and effortlessly filter out unwanted fat. The nature of its design means that it’s a cinch to pour what remains into a separate pot or pan and complete any gravy, sauce or simply render a clear broth. These are our top four picks available on Amazon.

It never hurts when a useful kitchen tool also has a little style and HIC’s classic version has it in spades. Made from borosilicate glass that’s heat safe to 300 degrees Fahrenheit, it has a healthy four cup liquid capacity and detailed markings along the side so it doubles as a measuring cup. A removable steel lid—with an FDA-approved silicone seal—means this versatile piece also strains whatever goes inside. The narrow spout originates at the bottom of the vessel so you can pour out the flavorful broth, leaving the rendered fat neatly behind.

When it comes to cooking, having a clear view of what you’re doing is essential and why this particular gravy separator is so good. Made from heat-resistant glass, you can pour turkey juices directly from the hot roasting pan to make gravy in a flash. If you’re worried about any large bits of food particulate or fond spoiling your sauce, don’t worry. This model has a removable lid with a built-in strainer to catch any unsightly bits that might result in a clumpy finished product.

OXO Good Grips is always innovating so leave it to the trusty brand to reinvent a classic. While most models have a standard spout that originates from the bottom, this version eliminates that altogether instead opting for a trigger handle that releases the desired liquid directly from beneath. A built-in strainer in the lid catches unwanted bits and an external drain makes it a cinch to pour off the unwanted fat in the trash. Considering it also has numerous measurement markings, this is one of the most well thought through designs on this list.

The last thing you want to do with your tasty gravy is to spill it while pouring. That won’t be a problem with Fox Run’s nifty separator. It features a lengthy, angled spout to ensure your prized sauce gets neatly on the plate each and every time. Made from tempered glass, it’s fitted with a perforated silicone lid to help capture any unwanted bits. The jug also sports clear measurement markings in both metric and imperial for easy conversion and can hold up to four cups.