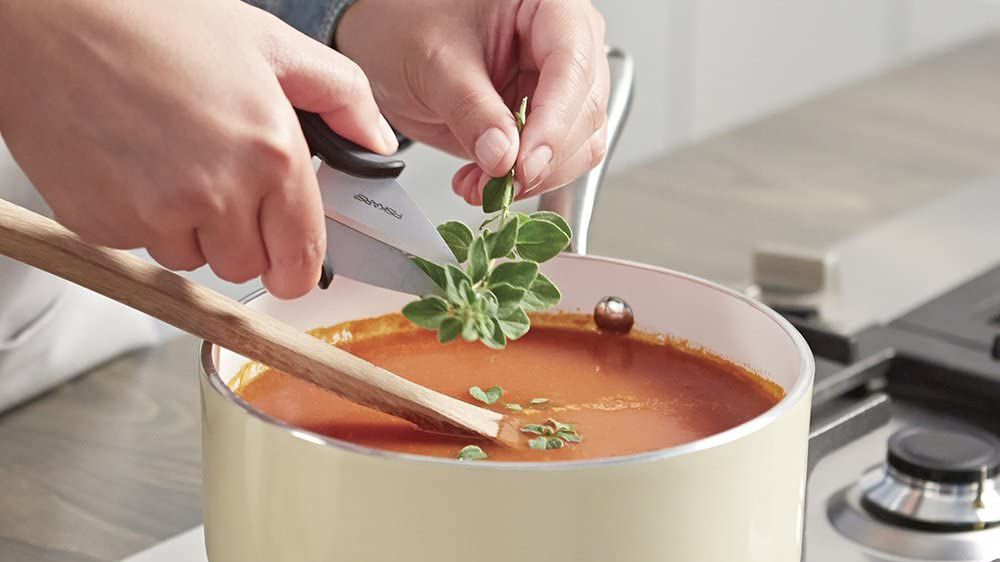 Say you have a pair of scissors lying around. Why, then, should you purchase a pair specifically for cutting herbs? There are a few reasons: The biggest one, perhaps, is that herb shears are typically sharper and made of stainless steel, making them better for cutting up pulpy leaves than any scissors you may have by your desk. In essence, a pair of herb shears make it much easier to cut chives, dill or rosemary—plus, their precision means fewer flyaways and therefore less cleanup.

Most shears are also multipurpose, capable of cutting not just sage and basil but also chicken wings and small bones. Use them to cut some veggies over a boiling pot of soup, or to slice some tender meat you’ll be grilling later. You can even use them to cut bits and bobs around the house—just make sure you clean any residual foodstuffs off first. Shears are also an ideal gift for anyone thinking about starting an herb garden of their own.

Here are four of the best pairs on Amazon to help you chop herbs in a snap.

Gela’s scissors aren’t just for cutting herbs—although the premium stainless-steel blades make this pair plenty great in that department—they can also open bottles, crack nuts and peel oranges. With five different blades in one pair of scissors, these herb shears will get the job done, whether it be for food, packaging or fabric. Just don’t forget to run the cleaning comb through the blades and put the magnetic cover back on when you’re done.

If you’ve just bought your first cookbook and are a bit intimidated by the amount of fresh herbs you’ll have to cut, then Gefu’s scissors are for you. With five stainless-steel blades, they’ll quickly chop any greenery into bits so you won’t have to worry about taking a knife to them on the cutting board. Their precise edge also should keep the kitchen from getting too messy. And in case you’re worried about the scissors themselves getting clogged with food, they come with a cleaning comb.

Fiskars’ herb shears will cut any stem clean through. Despite their unique design, these still get the job done via a spring-action mechanism that automatically pulls the blades apart after each cut, thus reducing physical strain. Plus, they’re dishwasher safe, so you’ll never have to clean them by hand.

When it comes to versatility, the Raging Radish’s herb shears are a cut above the rest. The multipurpose utensil is fitted with sharp blades that can slice and dice herbs like cilantro with minimal effort. It also sports nine holes of varying sizes that can be used to strip tough herb stems of their leaves. The biggest hole measures 13 mm while the smallest spans just 2 mm, which makes this tool perfect for thyme, rosemary, mint, parsley—you could even use it for kale in a pinch. Crafted from BPA-free plastic, the durable shears are relatively small and thus easy to store. They’re also dishwasher safe so you can clean them in a snap.