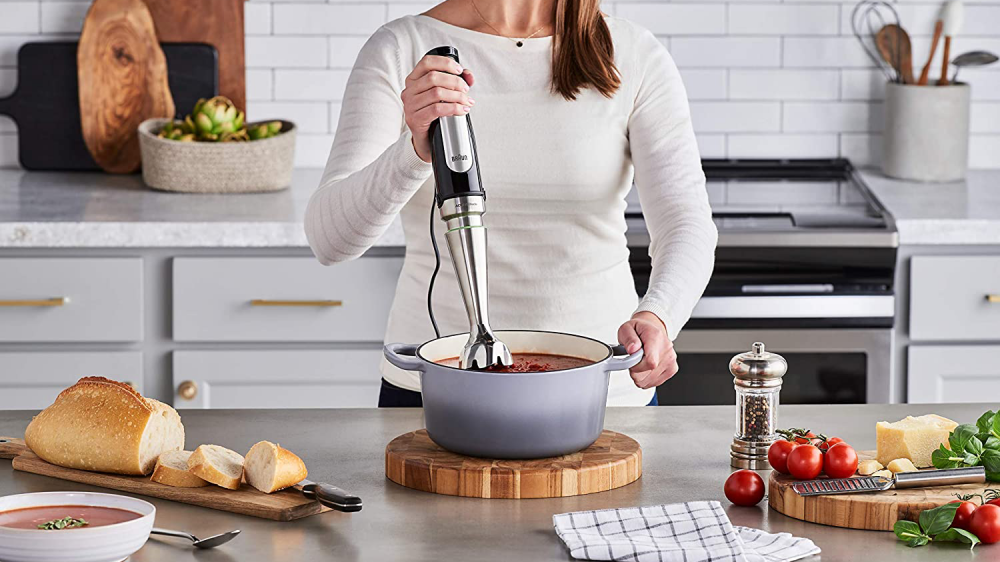 Many people will have blenders in their kitchen. And for good reason: A top-notch blender will churn frozen fruits into smoothies and veggies into soups with ease. It’s a bit of a clunky process though, as the machines are often heavy and can take up quite a bit of counter space. The immersion blender rectifies this problem, as it’s a small, wand-like tool that can be easily stored in a drawer or cabinet.

Also known as a stick or hand blender, an immersion blender is superior to run-of-the-mill blenders in that it can churn foodstuffs in the container in which they’re being prepared. For example, instead of transferring your soup ingredients to a blender and then pouring it back into a bowl, you can simply turn the immersion blender on, put it in the bowl, and voila: A freshly puréed soup. Not only does this cut back on the hassle, but it also minimizes any messes that pouring liquids back and forth from blender to bowl might create.

Immersion blenders are also great for when you have a large container’s worth of food that won’t fit in a traditional blender. Rather than pouring it into the blender in batches, you can simply use the wand and blend it in the bowl itself. The immersion blender isn’t a cure-all, though—most aren’t as strong as their countertop brethren, so hard foods like nuts may be out of the question for some models. In other words, you’ll want to consider why you need an immersion blender prior to purchase. Here are four of the best options to choose from.

The best immersion blenders are those that have many different functions and settings. That’s exactly what you get with Bamix’s offering, which comes with three different interchangeable blades that all perform different tasks: aerating, blending and chopping. Other settings can be customized as per your blending preference as well, most notably the speed, which can go between 10,000 and 15,000 RPM. Plus, the set comes with a wall bracket so the blender can be easily mounted and stored.

All-Clad may be best known for its pots and pans, but its kitchen tools are equally top notch. One need only look at its gorgeous immersion blender for proof. In addition to one of the best designs on the market, this stainless-steel model features a powerful motor (it’s as strong as a plug-in, 600-volt model) with five settings, making it well-suited for everything from soups to desserts. Its detachable base also charges in no time, so you’ll never have to worry about running out of power in the middle of cooking. One thing to note, it’s not recommended for use with non-stick or cast-iron pots.

You’ve likely heard of Vitamix. You may even have one of the brand’s high-powered blenders on your countertop already. Well, consider this immersion blender the smaller, more agile sibling to those devices. Fitted with a powerful 120V motor, the versatile design offers five different speeds to allow you to tackle all kinds of kitchen tasks. Crafted from stainless steel, it features a sleek body and ergonomic handle that makes it a pleasure to use. It’s also fitted with sharp blades and a guard that prevents them from scratching your favorite pots.

Waring’s immersion blender’s motor is so powerful that it rivals that of many countertop blenders. At 750 watts, the stainless-steel blade can make short work of tough foods and thick soups. It can process up to 10 gallons of food at once, and the 12-inch shaft promises a long reach, so it won’t get lost in the container.