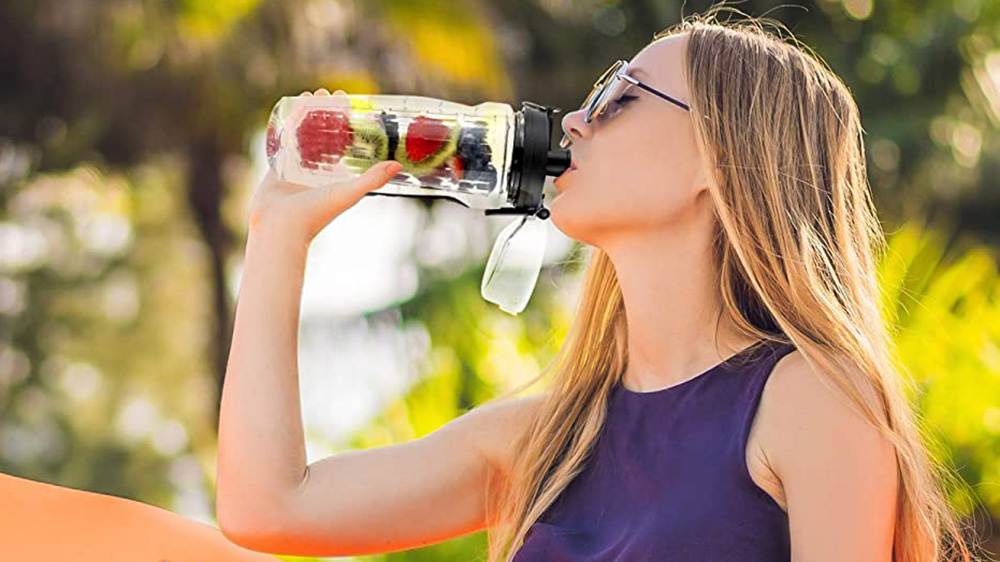 Water is something that every human on the planet needs. Not only is it necessary, it’s also awfully refreshing, especially on a hot day. But something that no one would cite as one of its virtues is its taste, which, let’s face it, can be a little bland. A water bottle with a built-in infuser, however, can change that.

A water bottle infuser acts much like a tea infuser. It’s a compartment within a water bottle that you fill with fruit of your choosing to add some flavor to you H2O. Because most infusers act more or less the same, when it comes to picking out a water bottle with one, you’ll want to pay attention to attributes like design, durability and size.

If you’re a water drinker and you want to add some flavor to your daily hydration, now is the time to get yourself a water bottle with a built-in infuser. Here are four of the best currently available on Amazon.

Infusion Pro’s bottle isn’t the biggest or the most stylish, but it’s one of the most effective out there. The 24-ounce bottle has a bottom-loading infuser that’s easy to fill with fruit and and a filter at the top to make sure nothing clogs up your drinking spout.  It’s also made from durable BPA-free Eastman Tritan plastic that can take a beating, and comes with neoprene-insulated sleeves that keep you from losing your grip on the thing.

When it comes to water bottles, there’s merit in the phrase “bigger is better.” After all, an extra-large container, like this one by XBottle, will help you to easily meet your hydration needs without having to stop for refills multiple times a day. With a generous capacity of more than half a gallon (84 ounces), the bottle features a removable fruit infuser that can house your favorite fruits for added flavor. And because the container is crafted from hard-wearing Tritan (BPA-free plastic), it can also hold hot water and double as a tea diffuser. The bottle is fitted with a leak-proof lid and sealing ring to prevent any spills. It’s also dishwasher safe for easy cleaning.

Infuser water bottles, like most water bottles, aren’t the most fashionable items out there. That’s not the case with H&N’s stainless-steel bottle though, which features a sleek and minimal design you won’t be embarrassed to show off in public. It does feature a smaller infuser than most of its peers, but, thanks to its vacuum-insulated design, it can hold hot water too, meaning you can drink tea from it.

Hydracy knows that an infuser isn’t the only way to add some flavor to your water bottle. The brand’s offering features a colorful spout, infuser, grip and other details that help it stand out from the pack. But there’s more to this bottle than some bold color: It can also hold 32 ounces of water and has a sizable infuser that can accommodate large quantities of fruit.