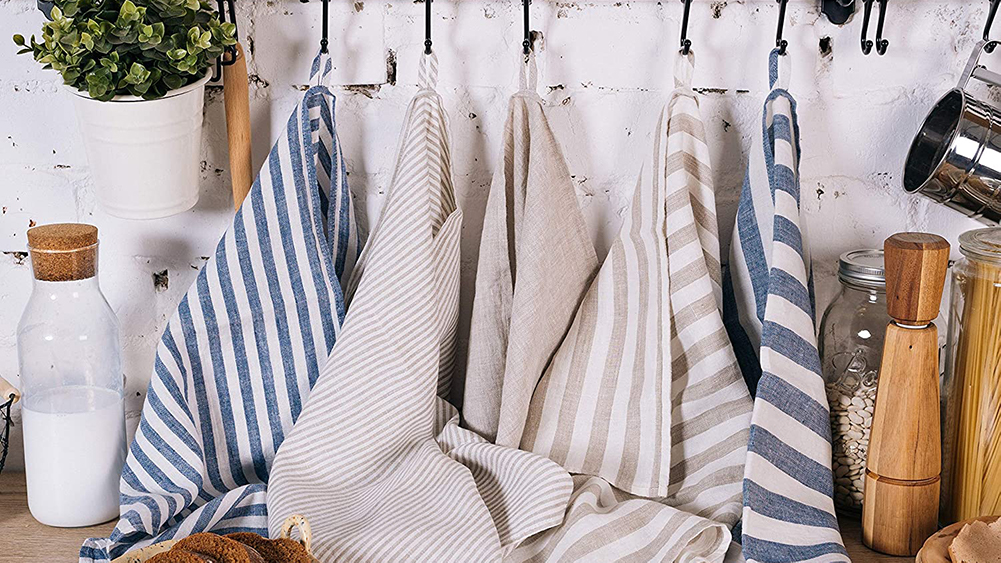 If you were already in the market for new cleaning tools for your kitchen, chances are you’ve noticed that linen towels are consistently much pricier than their cotton peers. So what makes them worth the splurge? For one, linen, which is derived from the flax plant, is far more durable than cotton, making its fibers much tougher to break down. It’s also a more sustainable option, as significantly less water is consumed producing the fabric, and fewer pesticides are used to grow flax. Not to mention you’ll likely end up using fewer paper towels once you have a good set of linens. So it’s an investment that’s inherently kinder to the planet.

Plus, from a purely aesthetic perspective, linen’s more rigid textures make it look more like a tabletop accessory than a cleaning tool, so any of these towels that are left hanging around won’t detract from the overall vibe. Of course, if you’re going to invest in 100 percent linen kitchen towels, you’ll want to pick up the right set. Here are four of our favorites on Amazon.

Liniche Home’s set of two linen tea towels comes in two different color options: beige and blue stripe. Choose the former as a gift to the minimalist in your life, or the latter for an extra pop of color in your kitchen. The 100 percent premium European linen towels can clean up most messy surfaces in a pinch, though, like any linens, you’ll have to machine wash them when they get too dirty. The good news? This set comes with metal hooks to hang them dry afterwards.

Why pay more for linen towels? They’re just so much more durable than their cotton counterparts. Take, for example, this two-pack from Thing Stories. You won’t have to worry about replacing them for years, unlike a cotton set that will probably start to show its age within a few months. But that’s not all this set has to offer. The simple woven design is surprisingly attractive regardless the color and ensures the towels will blend in with any kitchen.

If you’re looking for some of the best linen available, look no further than LinenMe. The family-owned business has been weaving the stuff for three generations, and it shows: Their set of two hand towels are among the most elegant on the market. Lightweight, durable and above all stylish, this set will keep your countertops plenty clean.

Solino’s set of two linen towels will tidy up your kitchen without breaking the bank. The vibrant red and green color options also make them great napkins for the table if you’re hosting. And after the night is over, just stick them in the wash—they’re machine washable—and do it all again.