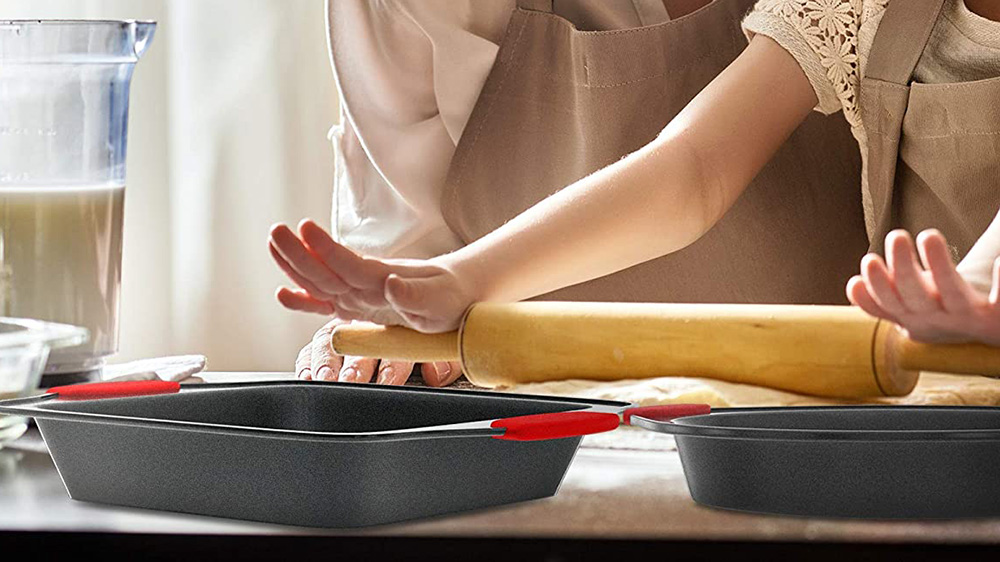 Baking can be intimidating until you get started. But once you do, even amateur chefs find it hard to stop. And like so many other culinary arts, there are plenty of tools to make use of, including pans, trays and racks. That’s why you’ll want to get yourself a comprehensive nonstick bakeware set.

Why a set of nonstick bakeware? Because, in short, it will make baking so much easier. The extra nonstick coating helps ensure that your creations leave the pan or tray in one piece, and, if you like to keep things neat and tidy, they’re a breeze to clean up. In addition, you’ll want bakeware that’s made from a durable material and you’ll want to ensure that your set complements your style of baking.

If you’re tired of not having the right pans, or if you just want to upgrade the ones you already have, then now’s as good a time as any to invest in a good nonstick bakeware set. Here are four of the best on Amazon.

If you’re looking to upgrade your bakeware, look no further than Circulon’s set. Made of heavy gauge steel, this set has everything you’ll need to bake cakes of all shapes and sizes, as well as loafs and muffins. It should also be noted that, especially as far as bakeware is concerned, this set, with its sleek design and circular base pattern, is surprisingly stylish and comes in three different colors: brown, red and grey.

Though its looks won’t wow anyone, this collection of pans, trays and racks from Calphalon has everything an amateur baker could want, including a baking sheet, multiple cake pans (one of which comes with a top for transport after baking), a muffin tray and a cooling rack. Each piece is also made from heavy-gauge steel, ensuring it lasts and heats your creations evenly.

When it comes to bakeware, like all kitchenware, function is most important. But that doesn’t mean your pans and trays can’t look good as well. And if you’re someone who wants bakeware with actual flair, Perlli’s offering is the way to go. The company’s set has everything you could want—including a pizza crisper—plus, each piece comes finished in a dazzling gold hue. And if that wasn’t enough, it’s bright blue heat-resistant grips give the set even more pizzazz.

If you love muffins, then Nutrichef’s bakeware set is for you, as it comes with not one but two muffin trays. And despite being made of carbon steel, they’re not carbon copies of one another—one fits 12 regular muffins and the other fits 12 mini-muffins. Of course, it’s got eight other pans to meet all your other baking needs as well. Each piece is also tough enough to withstand temperatures of up to 400 degrees Fahrenheit. And if you’re worried about burning yourself, fret not, as each piece has comfortable, heat-resistant silicone grips.