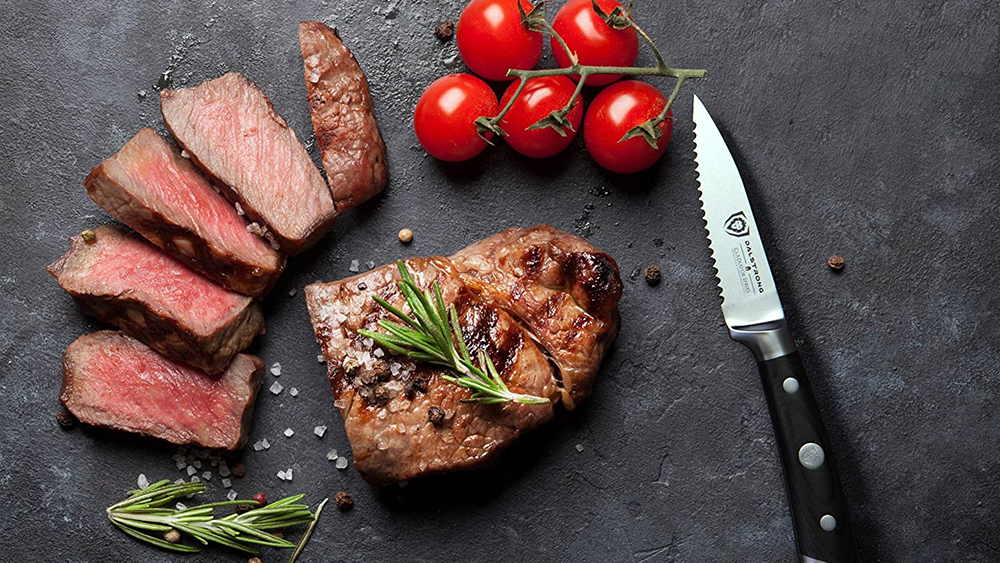 Despite what Crocodile Dundee might argue, bigger isn’t always better when it comes to knives. In fact, the most impressive blade of them all may be the pint-sized paring knife. This humble workhorse, which typically measures 4 inches or so, is perfect for in-hand detail work, like cutting, peeling, trimming and, of course, paring.

A top-notch paring knife will have a sharp pointed tip for piercing, good overall balance and a comfortable handle, so you can core and peel fruit and vegetables, segment citrus and create decorative garnishes with ease.

Once you have this tool in your kitchen arsenal, you’ll likely use it on a daily basis. So, it’s important you pick a sharp, high-quality blade. We suggest opting for a serrated version. While paring knives traditionally have a straight-edge blade, they tend to squish softer ingredients, like tomatoes, whereas serrated blades allow you to slice with precision. Here, four of the best to get you paring like a pro.

Designed by one of the most prized knife manufacturers, this 3.5-inch full tang serrated paring knife is forged from a single piece of high-carbon stainless steel that runs from the tip through to the black polymer handle and is secured by three rivets. This gives the knife great balance—and gives whoever wields it an incredible amount of control while slicing. The blade also features Wusthof’s precision edge technology which helps it retain its sharp edge for 30 percent longer than other knives.

Cons: It’s the most petite paring knife on this list and might be too small for some.

This high-quality 4.5-inch paring knife features a high-quality German carbon steel serrated blade that’s as tough as it is sharp. It’s resistant to rust and tarnish, but the thing that truly sets this paring knife apart is its contoured handle. Featuring soft rubber inserts, it’s easy to grip even if you’re peeling or slicing juicy ingredients.

Pros: Thanks to its ergonomic design, you’ll get next to no cutting fatigue.

Cons: Its length makes it less suited to detailed work. 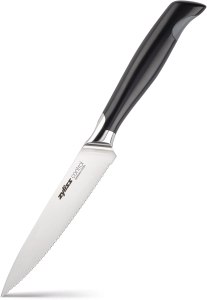 Victorinox may have built its name on premium Swiss army knives, but that’s not all the company can do. Want proof? Look to this multipurpose serrated paring knife that can handle everything from slicing and dicing to mincing and peeling. The handle, which is available in every color of the rainbow, quite literally, features the brand’s signature ergonomically contoured design and promises easy handling. The serrated edge delivers enhanced precision when slicing delicate ingredients, such as tomatoes or kiwis.

Cons: This knife has a rounded tip so piercing ingredients may be a tad more difficult. 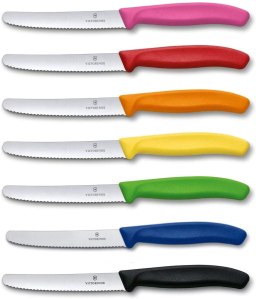 Considering this paring knife is from Dalstrong’s “Gladiator Series,” strength is to be expected. And, boy, does it deliver. Forged in Germany, the full tang 3.75-inch blade is triple-riveted for extra strength and maneuverability. It boasts a 56+ Rockwell hardness which means it’ll hold its razor-sharp serrated edge well into the future. The award-winning design pairs a luxury pakkawood handle with hand-polished high-carbon German steel and has been engineered for longevity.

Pros: It’s a testament to the high-quality craftsmanship.

Cons: It’s one of the pricier paring knives on this list. 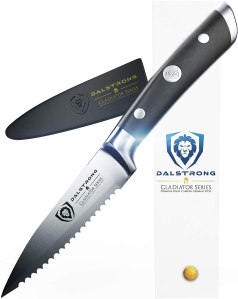 The Best Cheesecloths for All Your Straining and Separating Needs

The Best Grill Planks for Cooking Smoky Meats and Fish

The Best Masticating Juicers for Your Kitchen