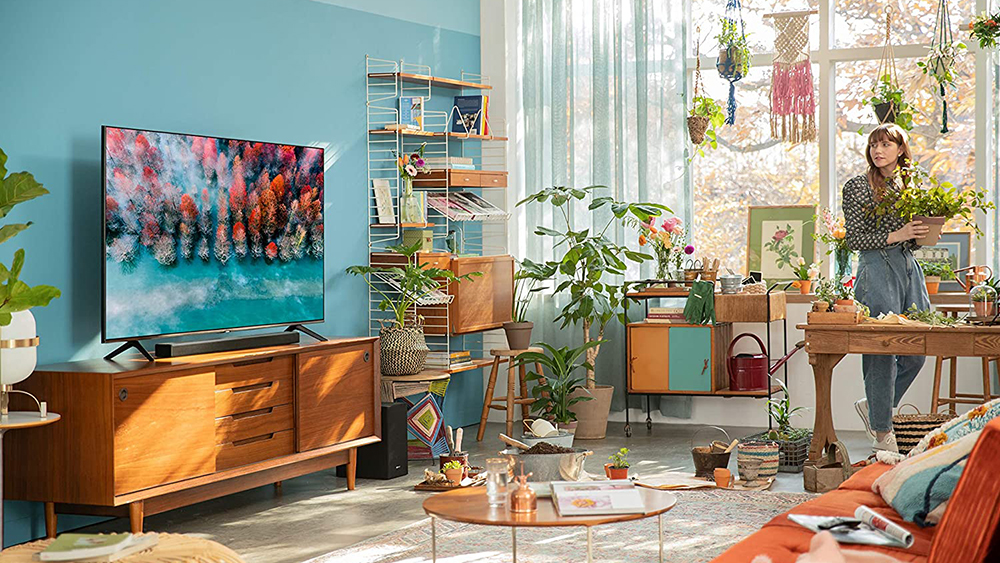 The television has come a long way since rabbit ears and turn dials. In the 2000s, the gogglebox officially turned into a flat-screen and high definition became part of the mainstream. But, today, it’s all about smart TVs.

Just like a smartphone, a smart TV connects to the internet to give the user access to numerous apps, streaming services and other content from the web. In addition to watching traditional television or digital content, you can also check the weather or stock prices with the touch of a button, so you’ll seldom have to leave your couch.

What’s more, smart TVs use less power, provide a brighter display with better contrast, have a thinner panel and less heat dissipation than a conventional LCD TV. They’ve improved exponentially in recent years. You can now find models that double as works of art, disappear like a magic trick or occupy an entire wall. Of course, a top-of-the-line TV, like the four models listed below, still has the power to transform any lounge room into a home cinema. Just grab the popcorn and you’re good to go.

Samsung has been producing smart TVs since 2008 and has come a very long way. This design is by far the biggest on this list and is perfect for big-time binge-watchers. The TV measures 55 inches and features an ultra-fast processor that transforms any footage into stunning 4K. Thanks to the crystal display, all colors are fine-tuned to deliver premier picture quality. The TV is powered by Tizen and can easily access all your favorite apps. It also features built-in voice control, so you can simply ask Alexa to change the channel rather than fidget with the remote.

It was super difficult to decide between the top two models on this list. Like the previous Samsung design, this LG smart TV features 4K resolution that gives incredible clarity and pristine light. It’s only 5 inches smaller than the aforementioned (50 inches in total) and also sits on a sleek stand. It too has its own “Magic Remote” that is voice-controlled and a processor that’s lightning fast. The only real difference is that this TV features an LED display, which is said to use less power and provide brighter colors with better contrast than a conventional LCD display, like Samsung’s. It just depends if you want a slightly bigger TV or a slightly brighter one.

If you’re after a smart yet simple television, Toshiba can deliver. This smart TV is super easy to install: Just plug it in, join the WiFi and you’re good to go. The 720P screen doesn’t offer the best resolution on our list but is still plenty clear and bright. Spanning 32 inches, it’s also a lot smaller than our top two, but that makes it great for tighter areas, like a study or guest room. The remote is voice-controlled and works with Alexa to make sure you can easily achieve any task.

Just like your smartphone, your smart TV needs to be regularly updated to ensure it continues to function at its best. Insignia’s nifty design runs automatic over-the-air software updates to make sure you always have the latest version of its operating system—which means TV keeps getting smarter. Like Toshiba’s design, this TV measures 55 inches and is great for a smaller space. It also delivers 720p picture quality with deep blacks and rich colors. The voice remote functions with Alexa and allows you to control other smart home devices. That means you can dim the lights, turn on a film and settle in for a movie night without leaving the couch.