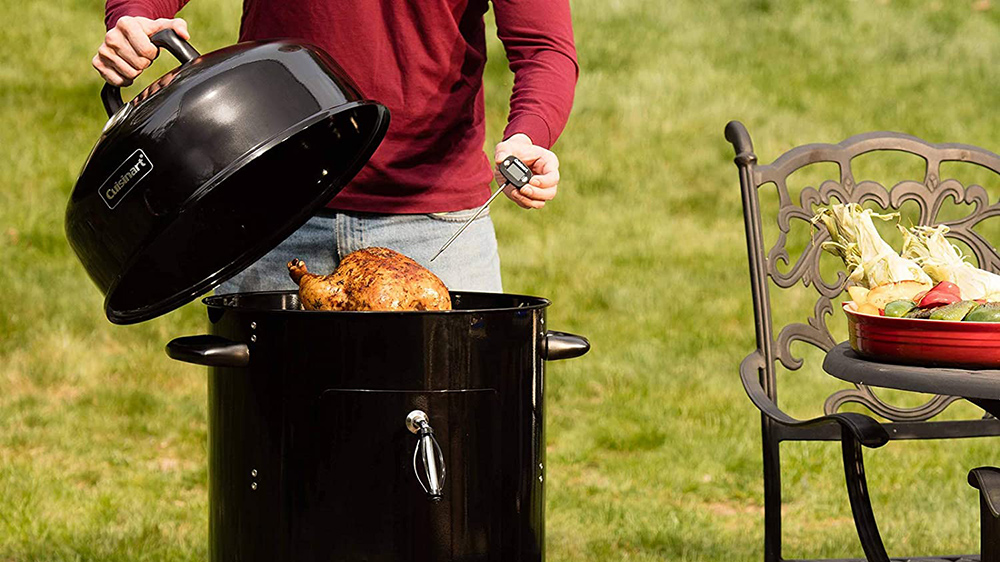 Do you already think of yourself as something of a grill master? Even if you do it’s always a good idea to add some skills to your repertoire—like smoking meat. And if you want to start making your own succulent ribs and brisket, you’re going to want to get yourself a smoker.

As you may have guessed from its name, a smoker allows you to prepare tasty smokehouse-quality meat at home. It looks like an elongated charcoal grill positioned upright or on its side, and includes a cooking chamber with and an integrated fire box. Simply load the box with fuel, light it and the combined heat and smoke will cook and flavor whatever meat, poultry or fish you’ve placed on its grill grates. When picking yours out, you’ll want to consider factors like cooking space, fire box size and what type (analog or digital) of temperature gauge it’s equipped with.

If you love smoked meats and want to be able to serve it at your next barbecue, it’s time to invest in a dedicated smoker. Here are four of the best currently available on Amazon.

Smoking meat may sound intimidating but with a smoker like Cuisinart’s, it doesn’t have to be. The brand’s model has two cooking grates and a built-in fire box at the bottom. Simply put whatever you want to smoke on the grates, light some charcoal in the fire box and you’re good to go. It’s that easy. The top and bottom also include dual air vents so you can control just how smoky the meat you prepare is.

Need to prepare a lot of smoked meat at once? If so, then Dyna-Glo’s upright smoker is just what you’re looking for. The brand’s heavy-gauge steel model features five chrome-plated racks for 1,382 square inches of smoking space.  It’s also got a large fire box so you won’t have any problem cooking everything either. One thing to note, its footprint is pretty big compared to the other models on this list, but built-in wheels make it easy to move around.

Smokers don’t come much easier to use than this offset model from Char-Broil. It looks just like a charcoal grill, except that it’s got a fire box jutting out the side, and is just as easy to use. Load the fire box with charcoal, the cooking grate with meat, light it and then just make sure to check on the progress periodically. One possible drawback, since it only has one grate: It has less cooking area than other options on this list.

A digital smoker may not be quite as fun to use as a traditional charcoal model, but it will give you more precise and consistent results. The brand’s smoker has a digital interface that gives you complete control over temperature and time. It also has four cooking grates so you’ll be able to smoke plenty of meat in no time at all. One thing to note, its fire box only takes wood chips, so the smoky flavor will be slightly different, but still delicious.