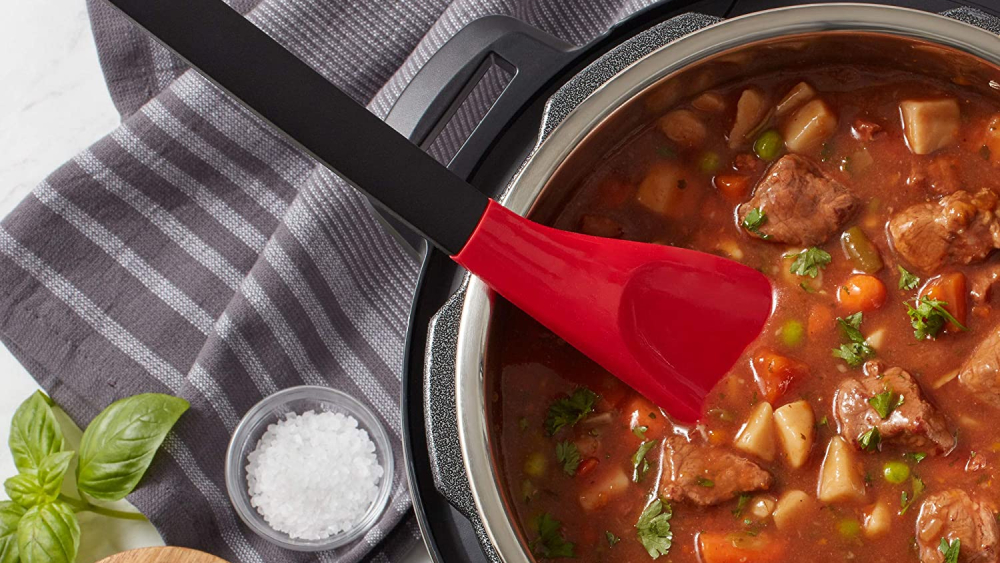 Most cooking utensils sitting in your kitchen drawers are age-old––think spoons, forks, ladles and the like. They may not be particularly exciting, but they get the job done efficiently, which is exactly the point. It’s not too often that a genuinely useful tweak is made to an established design, one that we feel is a worthwhile addition to our arsenal, but that most certainly appears to be the case with the spoonula.

As its name suggests, this tool is an intelligent hybrid of a spatula and a spoon, meaning that it’s just as good as stirring foods around a pan as it is at scooping them onto a platter.

Though they can come in an array of materials, we like the silicone variety for its resistance to stains and odors, but especially for its ability to withstand high temperatures. Here, we’ve selected four top models available on Amazon so you can get cooking in a flash.

We know, when you think Le Creuset, you think of colorful Dutch ovens. We don’t blame you, but the French brand’s other cookware is just as impressive. Take this spoonula, for example. Designed with an ergonomic blonde wood handle, it has a handsome head with a flat top edge that’s perfect for manipulating food in a pan and scraping up any bits that have become stuck to the bottom. Its high heat resistance means it has a wide array of cooking applications so it can help you scoop mounds of whipped cream frosting onto a cake as efficiently as it can stir onions sauteeing in butter and olive oil.

Pros: The colorful head is heat resistant up to 500 degrees Fahrenheit.

Cons: The scooping portion may be too shallow for transferring certain foods.

Rachael Ray is one of the food world’s leading TV personalities, and she’s put all of her knowhow into her eponymous line of products. Ray was among the spoonula’s early adopters, and her versions are some of our favorites. Colorfully designed, this set has three different sized spoonulas all of which sport silicone heads heat-resistant up to 500 degrees Fahrenheit and handles that can withstand temperatures up to 350 degrees Fahrenheit. The well-proportioned scoop makes them adept at spooning everything from rice to veggies and more.

Cons: It might not be the right choice if you’re only looking to add one utensil to your stash.

OXO’s version of the spoonula goes graphic with a two-tone design made from silicone that’s heat-resistant up to 600 degrees Fahrenheit. This marks it as the most heat resistant model on our list. Plus, the material means that it can be used on any kind of cookware, even the most delicate non-stick varieties, and it won’t discolor, melt or warp in the process. Its head is a bit narrower than some others on our list but it still does a spectacular job of mixing and stirring.

Pros: Its minimalist aesthetic blends in with just about any kitchen decor.

Cons: The narrow head makes its scooping capabilities a bit weaker than some of the others on our list.

Instant Pot may be reimagining how we cook in more ways than one. Besides its namesake device capable of cooking just about anything, its excellent take on the spoonula is not to be ignored. Made with a grooved handle for better grip, its head has a unique shape featuring both straight and curved edges so it can efficiently scrape the inside of a cooking vessel like no other. Heat resistant up to 450 degrees Fahrenheit, it can be used with just about any cookware but is especially good at tasks that require stirring mixtures (although it doesn’t have the capacity to scoop up as much as some other examples from our list).

Pros: Being both curved and straight, this model is just as good at scraping as it is at scooping.

Cons: The particular head of this model might not be as versatile as other silhouettes from this list.