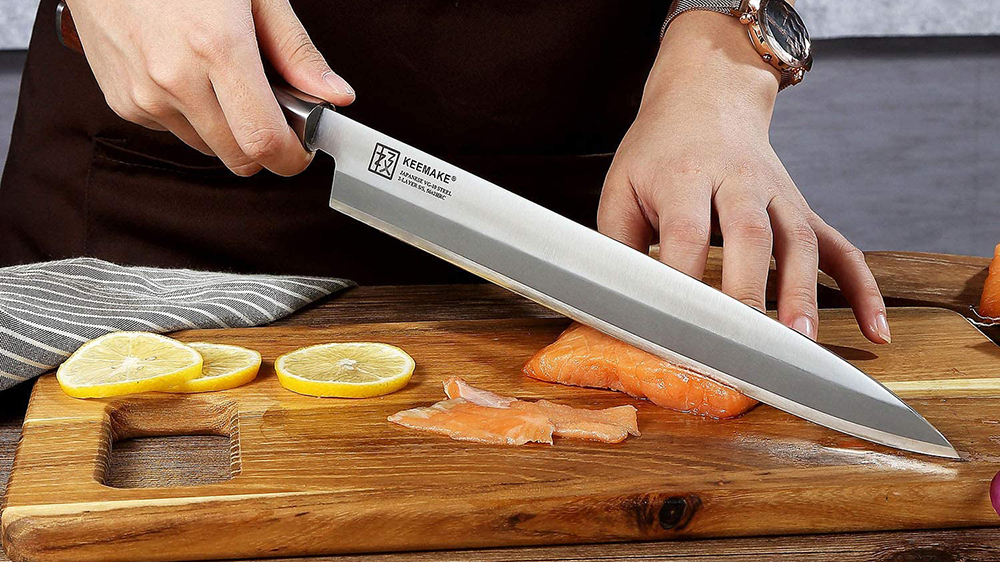 The right tools can help any chef, whether they’re a seasoned professional or a casual beginner, up their game. This is especially true when preparing something like sushi, where presentation is just as important as taste. That’s why you’re going to want a proper sushi knife.

Of course, sushi isn’t cooked, so the ingredients you use and the way they’re prepared and presented is of the utmost importance. Among seasoned vets, the knife of choice for slicing raw fish is the yanagi. Long and thin like the willow branch it’s named for, the traditional knife features a non-stick blade with a sharp edge designed to slice fish in a single stroke. The resulting cut is super smooth, enhancing both the aesthetic and flavor of the fish.

There’s no room for error when making sushi, so you’ll want the best yanagi available. Here are four options that will ensure all your creations make the cut.

Dalstrong’s yanagi is proof that style and substance can indeed coexist. The first thing you’ll notice about the knife is its bold yet graceful aesthetic. Along with a black Spanish Pakkawood handle that feels comfortable in the hand, the 9.5-inch blade is longer than many and cuts a striking figure as it makes its way through your ingredients. It’s made from nitrogen-cooled steel that enhances its hardness and flexibility—so it’ll hold its sharp edge for longer. Speaking of sharpness, the blade is carefully tapered to reduce drag so you get less resistance from whatever you’re slicing through.

Pros: A high-quality sushi knife that won’t break the bank.

Cons: Its eye-catching details may be too fussy for some.

The 15-inch blade of this ultra-modern yanagi knife was designed for one thing and one thing only: slicing fish as cleanly as possible. It’s crafted with extra-sharp German steel that holds its precise edge for longer than others and resists staining. It also features a weighted, hollow NSF handle that gives you all the control you’ll need for even the most delicate slices.

If you’re interested in a sushi knife, but not particularly enthused about putting down a ton of cash for one, then Keemake’s yanagi is exactly what you’re looking for. With a blade measuring 11.5 inches, the company’s no-frills knife isn’t the most stylish, but it more than gets the job done. Its core is made from two-ply, VG10 steel, which provides a clean cut every time, whether you’re slicing or filleting fish. Plus, its blade is easy to resharpen, so it should be long-lasting as well.

Pros: A no-frills option for chefs looking for a cleaner cut.

Yoshihiro’s Hongasumi yanagi is an all-but-guaranteed way to quickly level up your sushi game. The knife features an 11.8-inch, single-edged blade made from VG stainless steel that measures a 62-63 on the Rockwell scale. Ultra-sharp out of the box, the knife comes with a protective sheath and is easy to sharpen, meaning you’ll barely have to apply any pressure to cut through fish, even years after the initial purchase. Adding to the knife’s allure is an elegant and tasteful look that any fan of Japanese cuisine will love.

Pros: A gorgeous, professional-quality addition to any chef’s knife set.

Cons: Not recommended for beginners.

The 50 Best Valentine’s Day Gifts for Men, From Whiskey Glasses to Menswear Must-Haves