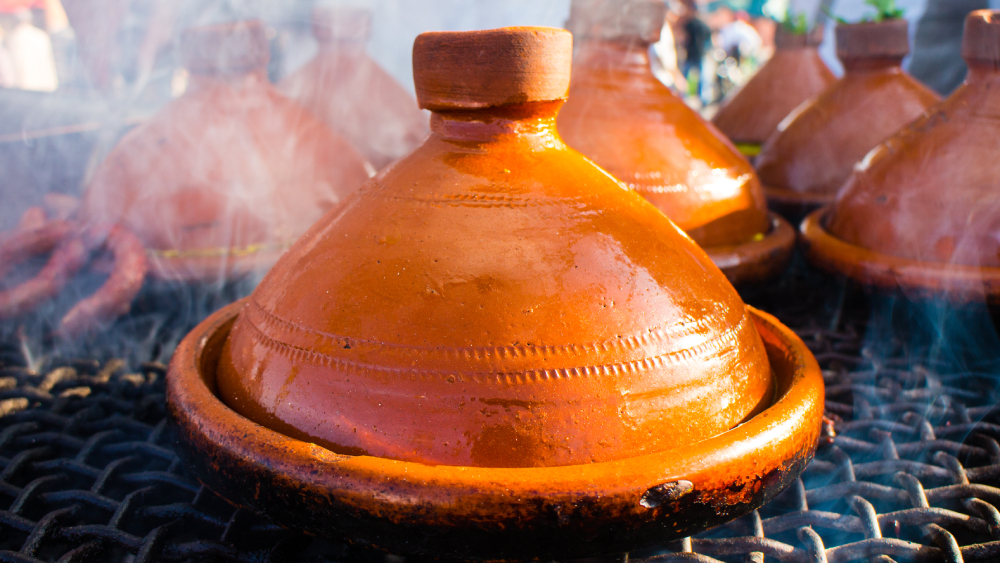 Ever wanted to make some of your favorite traditional Moroccan dishes at home? You may already have a Dutch oven, a pressure cooker and a slow cooker, but, to do that cuisine justice, you really need a tagine.

Hailing from North Africa, tagines are a kind of pan-pot hybrid traditionally made from clay with a vaguely conical lid. The earthenware material beautifully absorbs and retains heat while the snug top traps that heat and moisture to create an oven-like environment within. It’s precisely these conditions that allow even the toughest meats to become buttery soft with time and allow their juices to meld with rice and vegetables to create delicious one-pot meals.

This classic piece of cookware comes in countless iterations, so we’ve taken the liberty of finding the best versions you can buy today. Here are our top four picks to help take you on a culinary journey.

Le Creuset may be everyone’s first choice when shopping for a Dutch oven, but the iconic French brand makes tagines just as brilliantly. Part of the reason why is the application of the company’s signature enameled cast iron construction which allows for both easier cleaning and rich colorways. Capable of holding a full two quarts, it can easily fit large chicken parts and rice for a mouth-wateringly juicy chicken tagine tenderized by the steam trapped by the tight lid.

Morocco was once controlled by France so it makes sense that there’s more than one French-designed tagine on our list. This one by Emile Henry is made from the company’s proprietary high-fired clay for added heat resistance and has a large 3.7-quart capacity. Because of its material, this model is lighter than many others (especially those made from metal) but is equally versatile. It can be used on both the stovetop and in the oven as well as on grills. Resistance to thermal shock means it’s tough enough to go straight from the refrigerator to the oven so even the less experienced cooks among us can feel comfortable using it.

Cooks Standard’s tagine eschews traditional materials in favor of a much-loved modern technique: multi-clad construction. Formed from layers of metal, this brand’s version is excellent at distributing heat and creating an environment for even and consistent cooking. It comes with the conical lid, like most classic models, but also comes with a secondary glass lid that fits beneath so users can take their pick depending on which configuration they like best. Oven safe to 500 degrees Fahrenheit, you won’t have to worry about cracking. It’s dishwasher safe, to boot.

Kamsah’s ceramic tagine is handmade by women artisans in Tunisia, a city that has been crafting ceramics for centuries. It’s fair trade, which means the craftswomen are paid a fair wage for their work. The dome-shaped lid spans 10 inches high and features a striking hand-painted turquoise pattern that will liven up your table setting. Of course, it’s about more than just looks. The conical design allows your ingredients to steam to evenly and results in flavor-packed dishes.