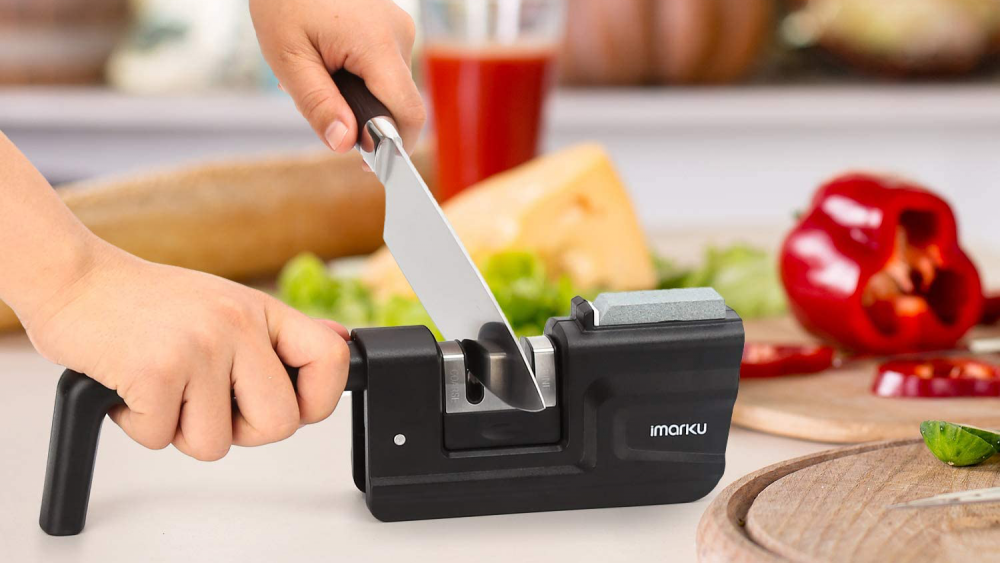 If you’ve just invested on a pricey set of chef’s knives for your kitchen, then you’re going to want to make sure they’re maintained properly. Even the best knives will start to dull over time, which is why a good sharpener is essential. In particular, a two-step knife sharpener will allow you to both sharpen and polish your cleavers, essentially packing two all-important functions in one countertop device.

A two-step knife sharpener has two different slots—it’s important that you use one of these before the other. The first is coarse and contains abrasives—usually diamonds—that shave off the old bits of steel, leaving a clean, sharp edge behind. The second hones and polishes the blade and typically contains ceramic materials. Simply flick the electric sharpener on and pull the knife through these slots sequentially. You’ll have a blade that’s as good as new in minutes.

A good sharpener isn’t just for one type of knife either. Many can be used to refine meat cleavers, pocket knives, hunting knives and more. Here are four of the best that will keep your blades from getting too dull.

Two-step knife sharpeners don’t come much more versatile than this model from AirCover. The brand knows that not all knives are the same, so its device comes with two built-in grinding wheels, one for fine blades the other for crude blades. But those aren’t the only things the device can sharpen—it also has a built-in scissor sharpening slot. Even better, the easy-to-use machine includes an overheat protection mode that’s designed to make the sharpening process safer.

Miyabi’s sharpener isn’t an eyesore like many other models out there. It foregoes the chrome look for a marble-like design on the portion with the sharpening and honing blades. These blades contain diamond and ceramic abrasives, respectively, which are among the best materials out there for making your knives as good as new. It’s best suited to sharpening sushi and sashimi knives, but it can be used on other blades as well.

If your kitchen is already bursting at the seams with various tools and devices, then you may want to invest in Imarku’s sharpener. The two-step sharpener can be folded away so that it’s just six inches long for easy storage. When unfurled, it’s also a solid option for sharpening knives—the coarse slot has diamond abrasives to make your blade feel brand new, and the second has ceramic to both hone and polish. Its design elements, however, are a bit spare. That won’t matter too much though, as its compact size means you won’t have it sitting around on your counter very often.

If you’ve never sharpened a knife before, then you’ll want a powerful, easy-to-use sharpener like this model from Chef’s Choice. The first slot contains diamond abrasives while the second incorporates polymer discs for polish, but it’s the internal elastomeric springs that make all the difference. These will guide your knife so that it’s positioned at just the right angle for maximum sharpness. In other words, it’s pretty much foolproof.