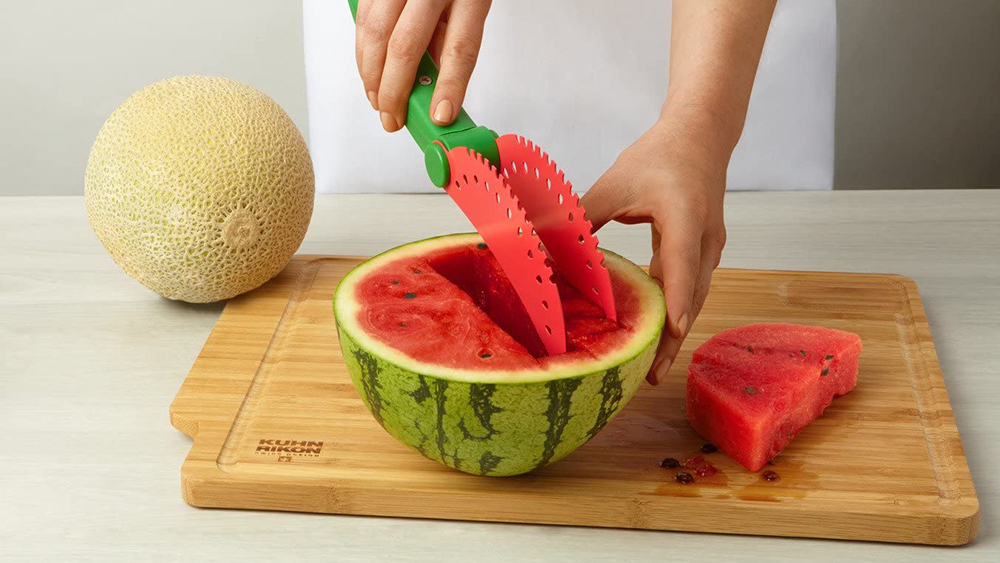 The seemingly never-ending number of kitchen knives may at times seem like overkill. Do you really need a specific knife for every culinary task? Maybe not all of them, but there’s no denying that some are exponentially easier with a dedicated tool—like slicing a watermelon.

As delicious as the flesh of a watermelon may be, getting to it is anything but convenient, as it’s an unwieldy fruit with an extra thick rind. Fortunately, a dedicated watermelon slicer makes cutting the fruit a breeze. They come in two main styles: a tool that cuts single slices and one that cuts the entire fruit at once. Either way, you’ll be enjoying a delicious piece of watermelon in one swift motion.

So, if watermelons are back in season and you find yourself hankering for fruit, it’s time to finally invest in a dedicated slicer. Here are four of the very best.

Why cut one slice when you can cut 12 at once? That’s what Feenm’s plastic and stainless-steel slicer will allow you to do, anyway. Just place the tool on top of the fruit, grab hold of the handles and press down. A split second later and you’ll have 12 slices of delicious watermelon. It also works on cantaloupe, honeydew melon, pineapple and vegetables.

Pros: A safe and easy way to quickly cut a watermelon.

Sometimes you don’t need to do it all at once. Kuhn Ricon’s slicer is for the person who wants to slowly eat their watermelon one piece at a time. Once the fruit has been halved, you simply stick the instrument in and scoop out a perfectly portioned slice. Simple. The slicer also sports a playful, fruit-appropriate color scheme, is devoid of sharp edges and is easy to clean.

Pros: A colorful slicer that cuts one piece at a time.

Cons: Not ideal if there is a group of people hungry for watermelon.

Riveira knows that not every watermelon is the same, so it sells three different slicers as a set. There’s a serrated knife to halve the fruit, a slicer for cutting one piece at a time and a tool for cubing. Each is made from high-quality stainless steel and features matching red grips. The set also comes in a box, so you’ll never have to worry about misplacing a tool the next time you want some fruit.

Pros: A set that allows you to slice and cube watermelon.

Cons: You’ll have to store three tools instead of just one.

As convenient as multi-slice watermelon cutters are, their build quality frequently leaves something to be desired. This doesn’t apply to Hiverst’s slicer, though. Made entirely of heavy-duty stainless steel, this is a cutter that’s stronger and better looking than the competition. It can also be used on pineapples and basically any other fruit that’s smaller than nine inches in diameter.

Pros: A convenient slicer made from premium materials.

Cons: Heavier than slicers made from plastic.