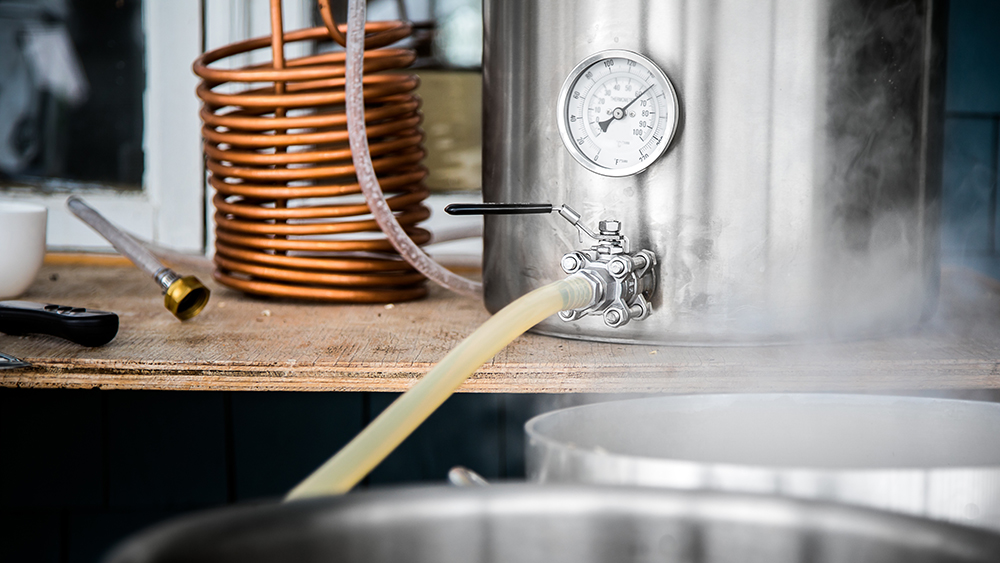 Any true brewmaster knows that the secret to a crystal clear beer is a precise chilling process. To do this effectively, you need a wort chiller. This nifty piece of gear helps to bring your brew’s temperature down quickly. Chilling the wort at speed helps the cloudiness settle out, leaving you with a nice clear beer that looks utterly superb in the glass (and tastes good, too).

There are two main types of wort chillers: immersion or counterflow. Each chills hot wort in a slightly different way. An immersion chiller is a coil of metal, usually copper, that is immersed completely in the wort. Then, it’s hooked up to a water source, so H20 can run through the coil and cool the wort. Conversely, a counterflow chiller features a coil within a coil. The wort is pumped through the inner coil in one direction, while cold water is pumped through the outer coil in another to cool the wort. Either one gets the job done, it’s just up to personal preference, price and your home-brew setup. Here, four of the best wort chillers we found on Amazon.

Exchilerator’s counterflow chiller is all about cooling wort quickly and efficiently. The setup consists of a copper pipe that’s covered in the brand’s proprietary co-helical wrap and sits inside a hose. This results in a steadier flow of water and wort, which in turn speeds up the chilling process. In fact, this bad boy can chill up to 5 gallons of hot wort within just 5 minutes. The chiller is fitted with a precision valve system, which allows you to adjust the flow, and a temperature gauge to monitor the heat. The chiller is very easy to set up, use and clean. It’s also far less prone to clogging than other models to make brewing a breeze.

If you’re planning to brew regularly, you’ll need a reliable wort chiller that is made for the long haul. NY Brew Supply has one such setup. The deluxe counterflow wort chiller features an ultra-durable 3/4-inch hose that can handle high temperatures and will not get brittle over time. Measuring 25 feet in length, it has a 1/2-inch copper inner-tube that effectively transfers heat and speeds up the process of chilling wort considerably. The heavy-duty brass fittings, meanwhile, can be easily connected to your cold water source via garden house connection. It’s also a cinch to clean, which means far fewer headaches on brew day.

Copper is a favored material when it comes to wort chillers as it’s a great temperature conductor and also has antibacterial properties. This is likely what prompted Northern Brewer to give its popular “Silver Serpent” the copper treatment. The sleek “Copperhead” is a 25-foot immersion wort chiller that comes fully assembled and ready to use. You don’t even have to sanitize it—simply drop the chiller into the kettle a few minutes before the end of the boil and it’s good to go. Thanks to the setup’s drop-angle connection,  the tubing will be free of any kinks or leaks. This will minimize fuss, maximize flow and allow you to effortlessly chill your wort. Then, you can chill yourself.

Like Northern Brewer’s design, NY Brew Supply’s immersion wort chiller is crafted from copper but it’s double the length of its competitor. This means the 50-foot chiller will cool wort much faster, within just a few minutes. It’s also great if you’re planning to brew larger batches, from 5 to 15 gallons. The chiller is also fitted with high-quality brass hose adapters that are plenty durable. Not only is it a super-efficient immersion chiller, but it also looks good, too. The shiny copper is a sure-fire way to add class to any home-brew setup.