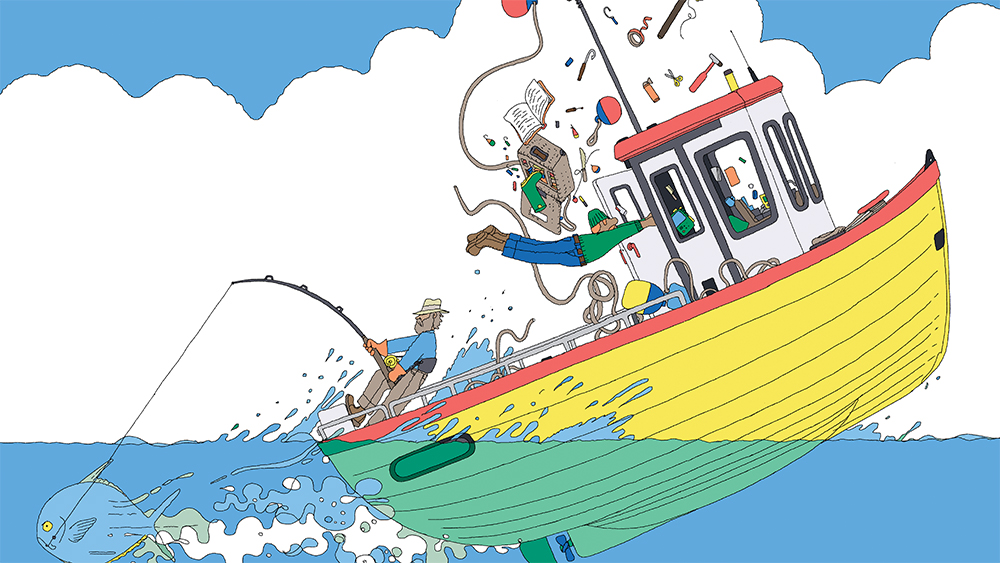 Are you familiar with the permit? A permit is a wonderful and, to the uninitiated, unusual-looking fish. Fly anglers are often intent on ruining their lives with heartache. Nothing breaks the spirit like a permit. They’re shy, strong and shockingly difficult to catch.

Placencia, on the southern tip of Belize, is one of the great permit destinations. Our hero can check into the delightful Turtle Inn, owned by Francis Ford Coppola, who knows a thing or two about the intensity of a good time. Here, you pursue three types of saltwater fish that, when caught together, comprise the fly-fishing grand slam. The idea of having it all—realistic or not—takes hold of the imaginations of fly anglers, many of whom are susceptible to delusions of grandeur. I’m afraid I’m one of them.

Here’s what makes the grand slam, which might end up taking over your life as well.

• The bonefish. An angler with good eyesight and a little luck can snag a bonefish, which, when hooked, goes on a breakneck run 200 yards into the distance. It’s a thrill.

• The tarpon. This prehistoric fish with a jutting jaw can weigh over 150 pounds. Even a relatively small one (15 to 40 pounds) jumps acrobatically in the air and lands like a fire hydrant in the water. Pure exhilaration.

• The permit. A sail-shaped fish (8 to 30 pounds), silver and gray, the grail of the sport. The permit has devastated fishing trips, marauded bank accounts and driven anglers to the brink of complete mental collapse. Naturally, I couldn’t wait to get started.

The Turtle Inn is a terrific place to relax, sip an aged Rum Collins, sit in front of your Indonesian-style thatched-roof villa and think pleasing thoughts. Yet still I gave up all that and headed over to the marina to meet my guide, Eloy.

The first day, we spotted some permit in deep water briefly—oh so briefly—but they didn’t slow down. We caught bonefish by casting into sandy water where they were feeding. It wasn’t as fun as catching them in the clear shallows, which makes the sport great. I landed a few small ones, but it lacked a certain charge.

By 4 pm it was cooling down and Eloy knew of a place to go. Tarpon had come into the shallow water as the sun started to set. I cast a purple bunny (a bad name for a good fly) and quicky landed a couple of small tarpon. The day was redeemed by late action.

We returned the next morning, and the tarpon were already there. One took my fly and in the same motion jumped five feet out of the water. Eloy howled with laughter, and I landed a (respectable for me) 12-pounder.

Nearby we came upon the rarest of all sights—a school of permit. And they were feeding. A permit burrows down into the sand to eat crab, and its tail rises out of the water, spreading like a black fan. For a tranquil sport, fly-fishing gets pretty intense. You try to keep your nerve and cast very close to the fish. Then let the crab fly start to “dive” into the sand, imitating a live crustacean. The anticipation is excruciating.

I made some bad casts and then a good one, and a permit took hold. I pulled the line to set the hook, which proved to be fateful. I felt the fish for a brief second before the line went slack. The hook broke (near the eye, almost impossible to do). Joy turned to despair. A broken hook is the wrath of a vengeful god. Eloy tried to sympathize, but there was nothing to say.

To my surprise, the permit returned. My cast had the good fortune of being in their path. In one motion a fish took the crab, turned and tore away from the boat. “Raise the rod!” Eloy yelled. “Don’t get caught on any coral.”

I was on an alternate plane, intensely aware of all that could go wrong. The permit went beyond the reef and into deep water. They’re so strong, and once it was in depth, it went all the way down. And I mean down. My rod was bent double, and the fish took out all the fly line—reserve line that is there for these moments—well into the backing. You don’t see your backing that often, and you don’t really want to think too hard about the integrity of some knot tied years ago.

Every time I reeled the fish in, it dived again, its silver side glinting in the deep blue water. Finally the permit started to tire. It had been fighting for 10 minutes, maybe longer; my grip on reality was not strong at this point. It was close to the boat—and did I mention you don’t use nets for this type of fishing? When the permit was beside the skiff, Eloy reached in, grabbed it right below the tail and pulled it up.

He whooped, but I was too stunned to speak, like somebody who’s convinced they’re seeing Elvis at a gas station. Eloy declared it 12 pounds (more likely 10, still nothing to scoff at).

It was 11 am. We had the rest of the day to catch a bonefish, but they were about an hour away by boat. The permit were here and feeding. What was more important? The grand slam or the chance to catch another permit? I tried to compose a narrative about having caught a bonefish late in the afternoon the previous day, so I had a grand slam within 24 hours. But that was semantics. I held the permit in the water. It was surprisingly firm, its back all muscle. Watching it swim away was one of the most wonderful things I’ve ever seen. I drank a beer and Eloy relaxed before we went back in the shallows looking for the next fish, knowing the odds were against us.

David Coggins is a New York Times–bestselling author who writes about style, art, design and travel. His latest book, The Optimist: A Case for the Fly-Fishing Life, is out now.