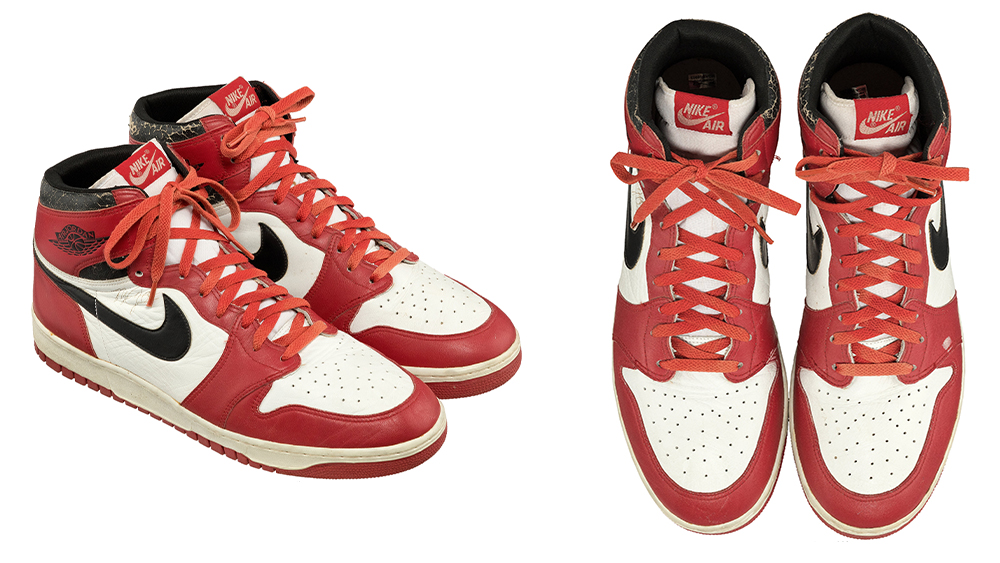 Yet another pair of rare Air Jordans worn by Michael Jordan is on the auction block. This time, though, they come with a photo match and a unique backstory.

Heritage Auctions currently has a pair of signed, game-worn Air Jordan 1 sneakers featuring the iconic Chicago Bulls red-white-and-black colorway up for auction on its website. The shoes come from a game against the Milwaukee Bucks that took place on April 1, 1986 at MECCA Arena—a significant date because it was after Jordan returned from taking time off for a broken left foot he had suffered earlier in the season. Jordan put up his usual GOAT-like performance that game, coming off the bench to score 28 points in just 26 minutes to lead all Bulls scorers.

Experts used a photo to match the shoes to this particular game.  Heritage-Auctions

As impressive as his scoring was on the night, experts were able to identify that the sneakers did come from the game due to a notable production defect: There’s an uneven count of eyelets on each side of the right shoe’s tongue. Nike must have missed a punch hole on the third hole from the top right where Jordan’s ankle would rest; the left shoe doesn’t have this mistake. Heritage Auctions was able to match the pair to the ones Jordan wore that night thanks to a picture of a leaping MJ that shows the NBA great’s shoes skipping the same eyelet.

There’s also another slick feature to this specific pair of Air Jordan 1s. These shoes come with a midsole and outsole from the Nike Dunk models, which were both softer and wider. Nike experimented with the different versions of the shoe—like a strapped model—in order to help Jordan heal better while he was recovering from the foot injury.

Jordan signed the shoe right below the missing eyelet.  Heritage-Auctions

The shoes show some sign of wear, most notably around the collar lining, where the black leather has cracked over time. Each of the interior ankles have a printed text—”13 860304STPS”—which designates the size thirteen and the production date (between March and April of 1986). The “PS” is code for “Player Sample,” which can only be found on models made for Jordan. The Bulls legend’s signature is just below the missing eyelet on the right shoe in black ballpoint pen, and received an 8/10 graded rating.

At press time, the rare Air Jordan 1s are going for $500,000, with the auction slated to end on Feb. 26. Other versions of Nikes worn by Jordan in games have fetched north of $1 million, which is about how much Heritage Auctions expects this pair to fetch, as well.