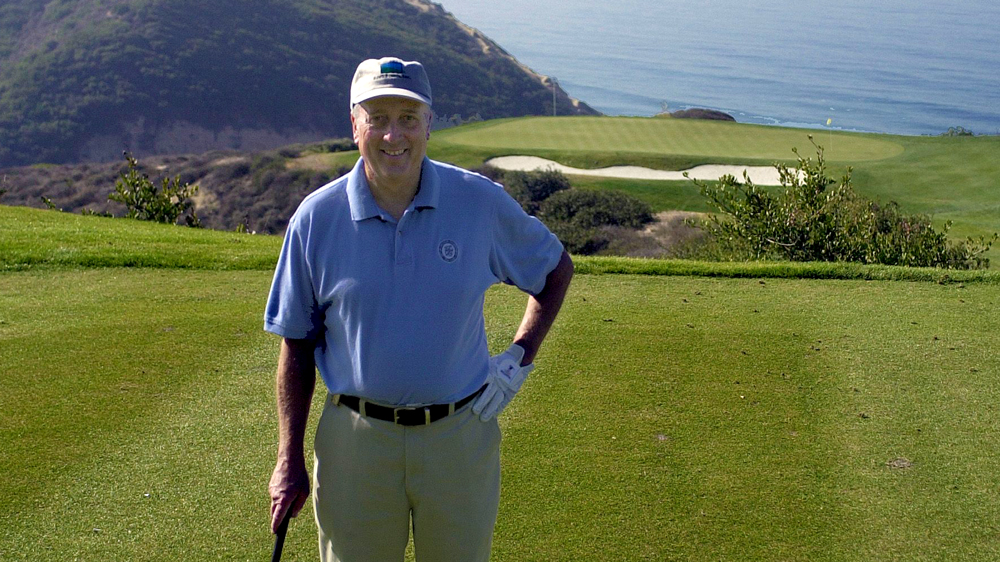 As Rees Jones and his playing partners approached the green of the fifth hole at Danzante Bay Golf Club—a majestic course designed by Jones in Loreto, Mexico, that opened for play in December—one of the golfers in the group states the obvious. “I hate to say it,” he announces, “but none of us are close to the hole.”

“Well, the green’s contours carried my ball away from the hole,” Jones replies, pointing to the moderate slope that bisects the front portion of the green. “We should probably complain to the architect,” he adds with a wry smile.

On the following hole, a 400-yard par 4 that doglegs gently to the right and plays slightly uphill and back into the canyon, Jones pulls his tee shot to the left. His ball remains on the fairway. Jones crafted a generous bailout area for risk-averse or short-hitting players who don’t want to take on the bunkers that guard the right side of the fairway about 200 yards away. But his second shot will be more difficult.

“Uh-oh,” says Steve Weisser, a fellow Rees Jones Inc. architect in the group. “Now he’ll have to take on the Jones bunker.”

The Jones bunker, as it has been named, is a fairway trap positioned about 40 yards short of the green. Players who have taken the safe route off the tee must contend with it on their second shot if they want to use the mouth of the green to bounce and roll their balls onto the putting surface. Armed with a fairway wood, Jones takes his swing and hits a low-arching approach that clears the back edge of the bunker, bounces forward off the downslope, and scurries up the hill and onto the front edge of the green.

The shot—and the entire hole, from tee to green—exemplifies Jones’s design philosophy, a belief that courses should be playable with shots through the air but also along the ground.

We sat down with Jones after the course architect’s late-afternoon, 9-hole round to chat about his spectacular new resort course, the impact that architects can make on the sport, and the most significant new developments in course design.

What features of Danzante Bay best reflect your current philosophy or approach to course design?

I try not to have a fixed philosophy; I want to adapt a philosophy for every golf course. If you’re redesigning a U.S. Open course [Jones has redesigned so many U.S. Open courses that he has earned the nickname the Open Doctor], like we are with Torrey Pines South Course, you need to build something that will challenge the best players in the world but be playable for the average golfer. At Danzante Bay, which is a resort course, we wanted to make it enjoyable and playable, so there are a lot of bailout areas and a lot of shot options for the average player, with the exception of the 17th hole.

What is the biggest challenge that you and other golf course architects have faced during the years that you have worked as a course designer?

The belief that a golf course can only be great if it is incredibly difficult. It started with the design of the TPC [Sawgrass] in Florida back in the 1970s, which was designed to test the best players in the game. It received such prominence and attention that a lot of architects followed that trend. The top-100 lists from Golf Digest, for example, have a category that grades a course’s resistance to scoring. Because a lot of clients wanted their courses in the top 100, architects built them to be strong tests of golf.

Why is that approach flawed?

You don’t build a church for Easter Sunday. If you design a course that hosts a PGA tournament or a major championship, the other 51 weeks out of the year, that golf course has to accommodate a different level of player.

You’ve built a reputation upon your work redesigning and renovating courses so that they can properly host major championships. How did you accomplish that without negatively affecting the course’s everyday playability?

When I renovated or redesigned those courses, my direction was to make them great tests of golf for the best players of the game. But I also designed them so that they could transition back to be fair tests of golf for the average player after the event. We completely rebuilt Congressional Blue, East Lake, Torrey Pines South Course, the Bellerive Country Club, and Medinah No. 3, and we built challenging greens that we sectioned off. So if you want to make a birdie, you have to hit the right quadrant. If you play it safe, you might have a knoll or a contour to traverse. With fast green speeds, you might be in 3-putt territory, but when we transition those greens back to normal speeds, average players can putt on those greens easier than the pros did [in championship conditions].

If too many courses suffer from designs that make them excessively difficult—and if that fact is partially why the sport is less popular with today’s younger generations—what is the best solution: building new courses that are more playable or redesigning the existing courses that are too tough?

It’s easier to do by redesigning, using Augusta National as your model and taking out a lot of bunkers. The slopes and contours of the ground at Augusta National are there to protect par as a standard of excellence, so you don’t need too many bunkers, and they don’t need to be all over the place. Adding tee boxes and widening fairways is also something that we can do easily on a lot of courses. But the Longleaf Tee System is going to be the most important aspect of all.

What is the Longleaf Tee System, and how does it work?

It’s a program that removes preconceived notions like men’s tees or ladies’ tees, as well as associations with specific-colored tees. The system uses eight numbered poles that are spaced 25 yards apart, starting 100 yards away from the practice tees at a course’s driving range, and those numbers correspond to eight tee boxes that exist out on the course. After players hit a number of drives on the range, they match their average carry distance to the closest numbered pole. That number determines the tee box that they should play. This system will allow more players to enjoy the game without needing to change the integrity of the course’s original design.

To be considered a great design, what does a golf hole and a golf course need?

If we, as architects, force you to have to engage your brain and identify the pros and cons on every shot that you face, we’ve done our job.

What gives you an edge to design golf courses that can be enjoyed by golfers of all ability levels?

I think it helps that I have been a single-digit handicapper for most of my life and played in the NCAA championships, but it also helps that I’m not so good that I don’t understand how the less-skilled player plays. If you’re a really good, elite golfer or a high handicapper, you end up thinking too much about your own game. But if you’re a good single-digit player, you’ll have good days and bad days, and that will allow you to think about how everyone plays golf. Then you can design a course through everyone’s eyes.

What scenario do you find more stressful—designing a brand-new course or redesigning an existing championship layout?

There’s more pressure on the redesigns of famous golf courses because there are a lot of experts watching you. When you build a new one, no one has any preconceived ideas of what should be done.

In response to good players now hitting the ball so much farther than even the best players did 20 or 30 years ago, is lengthening courses the best response that architects can take?

To some degree, yes. You have to make it longer because the few players that have swing speeds over 120 mph can hit the ball incredibly far. A combination of equipment improvements now enable players to swing as hard as they are capable, but that improved equipment is good for the game because the average golfer needs all the help he can get.

Are there any young course architects that you believe will take over the industry once you and your contemporaries retire?

An architect has to get a great opportunity like Mike Keiser gave David McLay Kidd at Bandon Dunes. Then the architect gets recognized and gets more opportunities. Right now, it’s hard to know who’s going to get those opportunities because those architects are working mostly on full-time restorations and redesign projects.