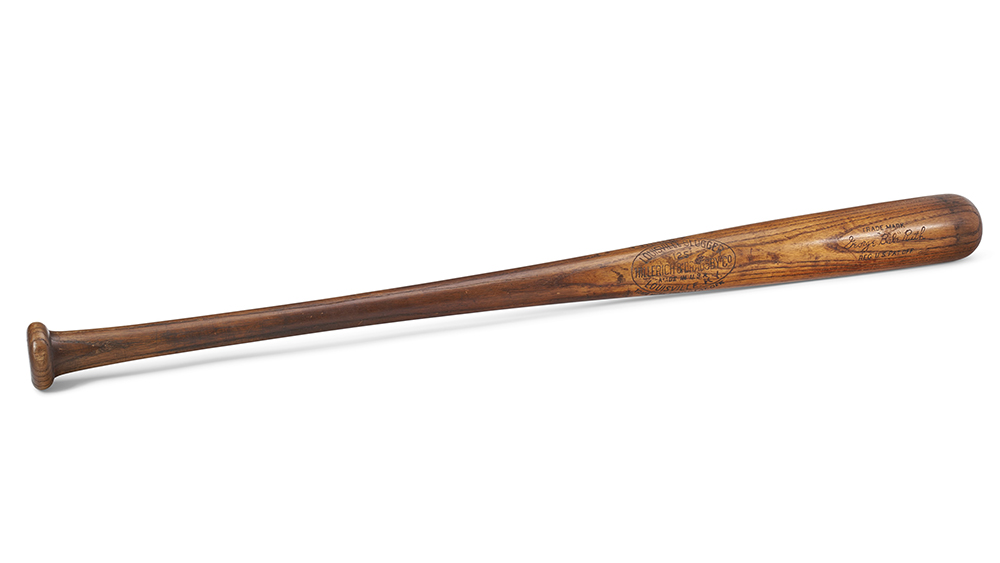 The Sultan of Swat’s most lethal weapon is about to go under the gavel.

One of the late, great Babe Ruth’s baseball bats, with which he hit no less than eight home runs throughout 1928 and 1929, will lead Christie’s and Hunt Auctions’ epic Extra Innings sale next week.

The auction, which will take place live in New York on Thursday, October 7, comprises a variety of coveted baseball memorabilia and trading cards relating to some of the most legendary players, including Babe Ruth, Lou Gehrig, Joe Jackson and more. The single-owner private collection was amassed over the past 25 years and features a great number of collectibles that are being unveiled to the public for the very first time, according to Christie’s.

“The collection was assembled over 15-20 years ago and is noted as one of the great remaining private archives of its type in the hobby,” president of Hunt Auctions David Hunt said in a statement.

The marquee piece is, of course, the Great Bambino’s bat, which measures 35 inches and weighs 35.4 ounces. The auction house says it’s one of just five in existence to still feature original home run notches engraved by the Hall of Famer himself.

“I started ‘notching’ my bats for home runs, like the old gunmen used to notch their guns when they killed a man,” the slugger wrote in the 1928 tome Babe Ruth’s Own Book of Baseball. “Every time I would hit a home run I would cut a notch in the bat handle of the club I had used.”

The bat is one of just five such examples in existence.  Christie's

The rarity is expected to fetch between $500,000 and $1 million. It shouldn’t have any trouble achieving that sky-high amount, either. Back in December 2019, a bat the Yankees star used to smash his 500th home run sold for just over $1 million at SCP Auctions.

The only signed photo of Joe Jackson in existence.  Christie's

In addition to the live auction, select items will also be available online from now until October 8.