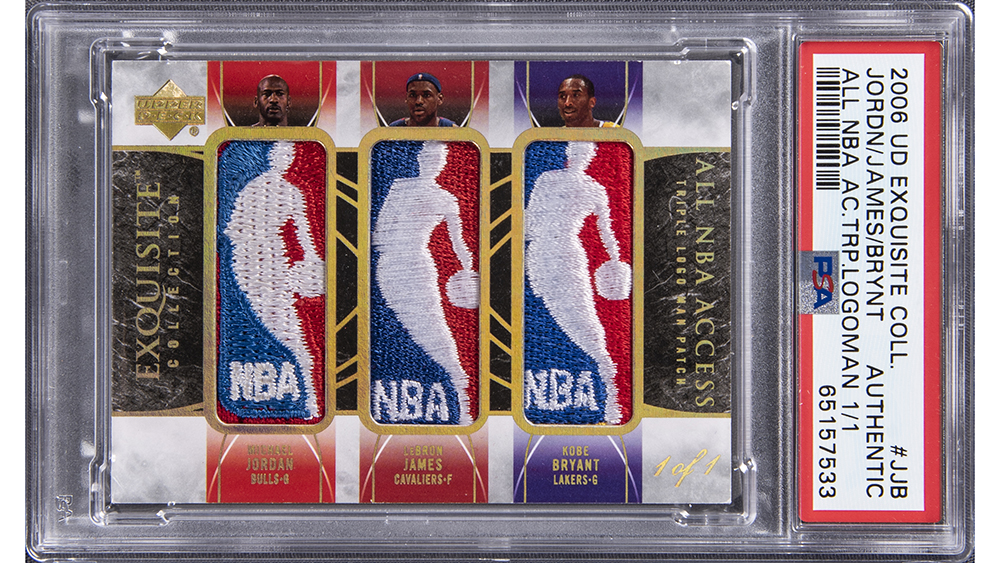 Your everyday trading cards can be collectibles all on their own, but one that recently hit the auction block has the added bonus of including actual memorabilia from NBA games.

The rare trading card is from the 2006–07 Upper Deck Exquisite Collection, which is highly coveted by collectors, according to the auction house, and it’s been assessed as authentic by Professional Sports Authenticator.

The front of the card features the headshots of the three big-name ballers atop jersey patches they wore during NBA games, although it’s unclear when exactly they sported the patches on the court. James’s is from his time with the Cleveland Cavaliers and sits between Jordan’s from the Chicago Bulls and Bryant’s from the Los Angeles Lakers.

The back of the trading card  Goldin Auctions

The back of the card then has a message for the lucky owner: “You have received a Michael Jordan, LeBron James and Kobe Bryant Game-Used trading card. On the front of this card are pieces of memorabilia that have been certified to us as having been used in an NBA game. We hope you enjoy this piece of basketball history, as we continue to keep you as close as you can get!”

Over the course of their careers in the league, Jordan, James and Bryant have among them 10 MVP awards, 15 NBA Finals championships and 50 All-Star Game selections. Jordan and Bryant both sit in the Naismith Memorial Basketball Hall of Fame, and James will likely end up there after his career comes to an end. These three have each individually changed the sport of basketball and contributed to its overall success, underscoring just how valuable the group trading card is.

With eight bids so far, the card is currently sitting at $1.1 million. But bidding doesn’t close until August 6, so you still have plenty of time to become the owner of basketball (trading card) history.