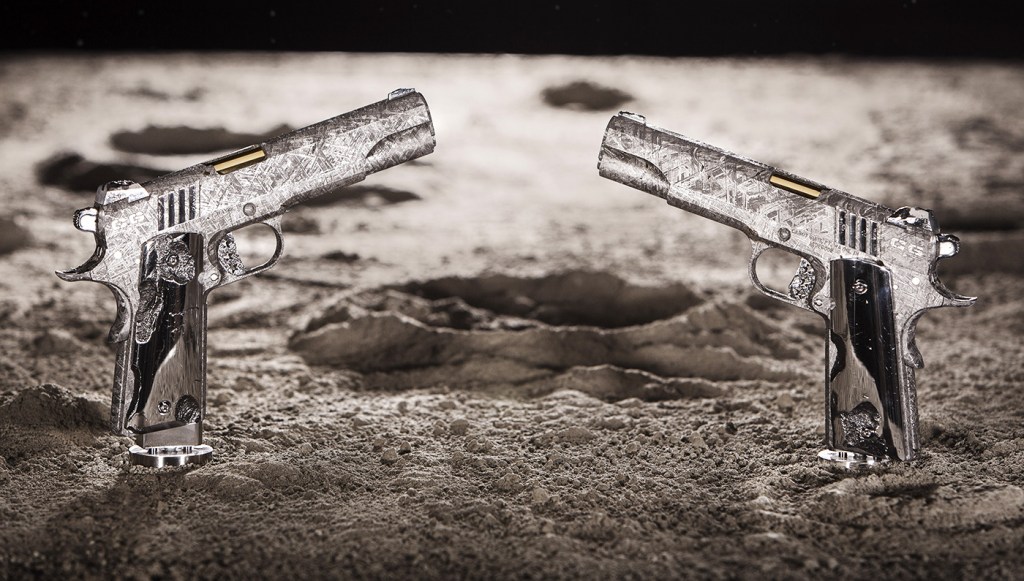 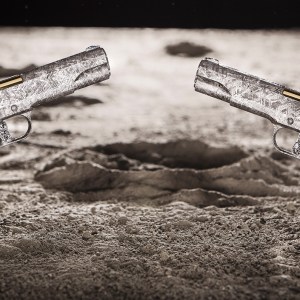 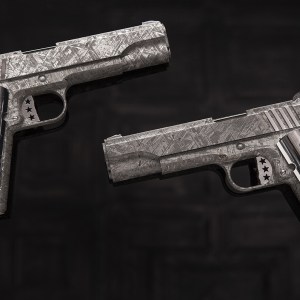 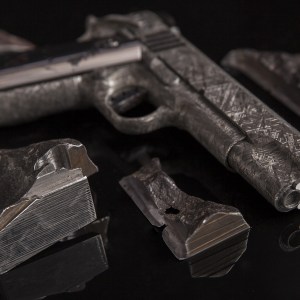 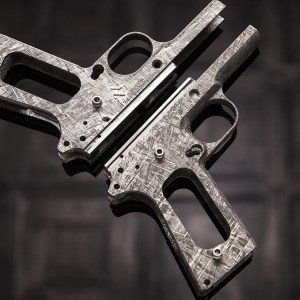 It takes a long time to handcraft a high-end 1911 semi-automatic pistol. In the case of Cabot Gun’s Big Bang pistol set, it took 4 billion years. That’s how long the Gibeon meteorite was flying through space—an arduous journey that made the cosmic rock a challenging material from which to create a pair of handguns. In fact, these are the first mechanical devices made from a meteorite in the history of mankind.

“Gibeon is the premium nonrusting meteorite,” Cabot metallurgist Jay Morely tells Robb Report. “But it was heat-treated by God—born in enormous heat, frozen solid in space, heated again as it blasted into Earth’s atmosphere, and then cooled again. It’s relatively soft and full of inclusions, bits of debris that hit the meteor at thousands of miles an hour millions of years ago.”

In other words, creating a working mirror pistol set (left- and right-handed versions) from a chunk of the Gibeon meteorite was an enormous technical challenge—one which Cabot Guns made after fitting meteorite grips to another “standard” 1911, despite the risk that the meteorite would crack or even explode during production. Cabot’s small, highly skilled team used X-rays, 3-D modeling, electron-beam welding, EDM wire cutting, and endless hours of expert care to fashion the first-ever meteorite firearms. Just to be sure, Cabot built a stainless-steel clone to test its production processes and to avoid costly, even irreversible mistakes.

“Not to coin a phrase,” says Rob Bianchin, founder and president of the Pennsylvania gun maker, “but we were sweating bullets. That first cut, when we sliced the meteorite chunk in two, was really scary.”

The only parts of the Big Bang pistol set that aren’t made of meteorite are the springs, sears, barrels, hammer strut, pins, screws, and slide rails. Everything else—slides, frames, triggers, magazine release, and grips—is pure Gibeon. Speaking of frightening, the guns’ first test firing was a bit daunting.

“I shot one freehand,” says Cabot’s head engineer Mike Hebor, who is right-handed. “I held the gun with my left hand, with my right hand behind my back—you know, just in case.”

It’s doubtful (but not impossible) that the guns’ eventual owner will use a Big Bang gun for self-defense or target shooting. An aspiring buyer offered Cabot $1 million for the one-of-a-kind pistol set, sight unseen. The eventual purchase price—$4.5 million for the pair—would make them the most-expensive guns ever, if sold.

More than its rarity, the Big Bang pistol set is aesthetically astounding. Cabot acid-etched the meteor to bring out the Gibeon’s Widmanstätten crystalline pattern—famed as the most desirable among iron meteorites. The company also left the meteor’s bark (outside surface) visible on strategic surfaces, such as the trigger and within the high-polish grips.

The Big Bang pistols are a never-to-be-repeated landmark achievement. In addition to their cosmic history, these firearms trace their roots to prehistoric times here on Earth: Ancient Africans used the Gibeon meteorite to create some of humanity’s first weapons. Plus ça change. (cabotgun.com)

Robert Farago is the publisher of TheTruthAboutGuns.com.