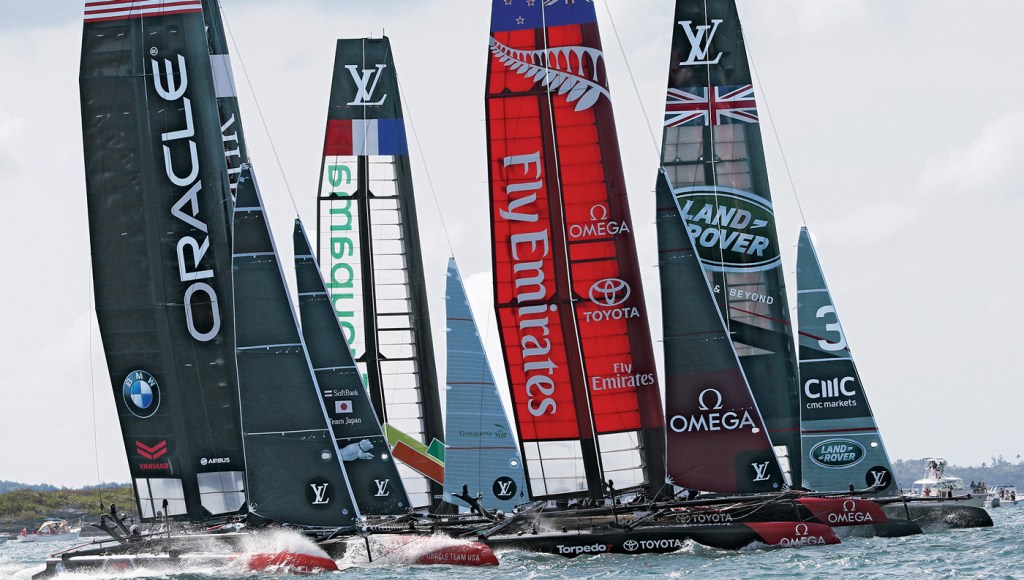 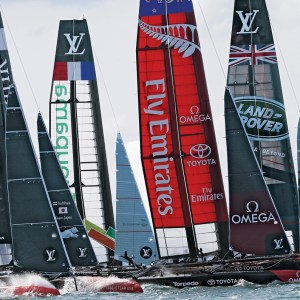 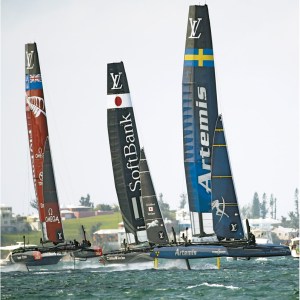 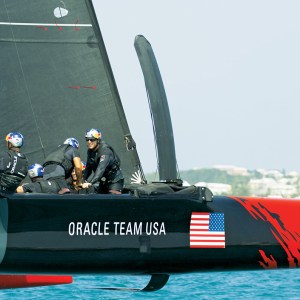 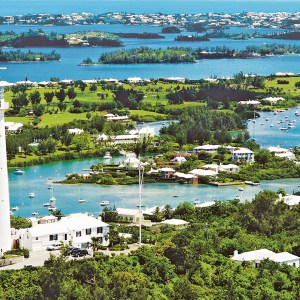 With a series of preliminary races, Bermuda offers a taste of what it will be like when it hosts the world’s most prestigious sailing competition.

Drums pounding, bagpipes wailing, and resplendent in spiked pith helmets and gold-braided tunics, the Royal Bermuda Regiment high-stepped through the mid-October night. At the harbor, yachts and motor launches were lit by the glow of waterfront store windows, while tourists and locals formed long lines in front of tents offering the full array of street-festival diversions: face painting, T-shirts, trinkets, fish sandwiches, and dark ’n’ stormies, the island’s traditional rum-and-ginger-beer cocktail. A troupe of Gombey dancers in colorful masks strutted to and fro while the country’s premier, Michael Dunkley, urged every Bermudan to come out and celebrate the opening of the Louis Vuitton America’s Cup World Series. “This is our time to shine,” he said, “and tonight we shine as bright as the brightest star.”

This was the kind of welcome that the Internet tycoon Larry Ellison, owner of the Oracle Team USA America’s Cup yacht, had been hoping for ever since he selected Bermuda as the venue where his team would defend its title in the summer of 2017. There would be celebrities, yacht owners, television cameras, and hordes of well-heeled tourists eager to spend; the races hadn’t even started, and they were already boosting the local economy.

“I’ve been here for 35 years and I’ve never seen anything like this,” said a woman working at a restaurant at the harbor, where she was serving up the island’s trademark fish sandwiches. “It’s been great for the fish-sandwich business.”

The World Series races are part of a global series of warm-up contests involving Ellison’s team and the crews from France, Great Britain, Sweden, Japan, and New Zealand. In the spring of 2017, all of the teams will be back in Bermuda, where the five challengers will compete in qualifying races to determine which will face the Oracle team in the America’s Cup finals that June.

For the World Series, the teams compete in one-design AC45 catamarans, which, at 45 feet, are slightly shorter and a bit less complex than the vessels that will be sailed in the America’s Cup qualifying races and the finals. The next World Series races are February 27 and 28 in Oman. The series then comes to North America, visiting New York City in May and Chicago in June.

Superyacht owners and charterers can enjoy extra perks when visiting Bermuda during the America’s Cup qualifiers and finals. Event organizers have created a Superyacht Program that offers exclusive access and services, including berthing with a “front-row” view of the racing, concierge assistance, admission to the official America’s Cup hospitality venue and postrace press conferences, and entry to the America’s Cup Superyacht Regatta. Some of the berths will be located at the south basin of the Royal Naval Dockyard, which is being redeveloped into the America’s Cup Village and a state-of-the-art marina.

However, the best way to view the racing, other than from the deck of one of the America’s Cup yachts, is from a chase boat.

“Time to go,” a T-shirted race staffer said, tossing me a life vest and leading the way out of the media tent, down the stairs to a dock, and onto the motor launch serving as the Oracle team’s chase boat. We made the brief ride to the Great Sound, where the racing was going to take place. There, aboard their catamaran, the Oracle crew members were moving around on the trampoline that connects the vessel’s hulls. Most of the crew members appeared to be in their 30s. They all seemed to be at least 6 foot 3 and triangular in silhouette, with shoulders like Captain America and chiseled jawlines.

“Hang on tight!” said the chase-boat skipper, just before the starting clock ticked down to zero and the Oracle yacht accelerated across the starting line and into first position. We clung to the sides of the hull as the launch bounced against the waves like a Jet Ski, straining to keep up with the sailboat.

“Hang on!” the skipper yelled again. “If you get tossed out nobody’s going to stop and pick you up!”

Now he told us. However rough the ride, the view was exhilarating when we motored between the New Zealand and Japanese catamarans as they turned for the race’s return leg. When the Japanese vessel listed high to the left, as if cartwheeling, our skipper dropped back, taking care to stay clear of the buoys marking the racecourse.

Before we knew it, the race was over. The Oracle team had taken first place and all six yachts were lining up for the second of the afternoon’s three heats. That’s when the accident happened. As the yachts maneuvered for position at the starting line, the Swedes ducked their boat behind the Japanese, only to find themselves on a collision course with the umpire’s boat. They hit it at a speed of about 25 mph, sending an umpire overboard and wiping out their bowsprit.

Nobody was seriously hurt, and after stripping away the damage, the Swedish team nailed the start and went on to win race 2. At the end of race 3, the Swedes executed a perfect foiling jibe and flew across the finish line in fourth place, just ahead of the Oracle yacht. No worries for Ellison’s team, though. The real races do not begin until it is back in Bermuda in 2017, trying to hold on to the America’s Cup trophy.

The trophy dates to 1851, when the U.S. schooner America raced around the Isle of Wight against the best the British could offer, with Queen Victoria and Prince Albert watching. The winner was awarded the Royal Yacht Squadron’s silver cup. As the U.S. boat sailed past the British yachts, the Queen asked an orderly who was in second place.

“Your Majesty,” came the reply, “there is no second.”

Over the years, the yachts have evolved and the venues have moved from ocean to ocean, but since the beginning, the winner has taken all—including the authority to make the rules for the next series of races.

The trophy—that silver cup—is named for the yacht that won that first race, not the yacht’s country of origin. In 1857, the captain who had sailed America to victory donated the bulbous trophy to the New York Yacht Club under a deed of gift stipulating that the trophy become “a perpetual challenge cup for friendly competition between nations.”

The “friendly” part was a bit of a stretch, given that the deed imposed numerous disadvantages on challenging yachts. For instance, the challenger used to be required to sail to the location of the contest “on its own bottom,” meaning it had to compete in a yacht built for an ocean passage instead of one designed for racing.

The deed also permitted the cup holder to dictate the size and design of the yachts and the location of the races, which is sort of like the New England Patriots requiring their Super Bowl opponent to play with deflated footballs in Gillette Stadium.

If the deed was drafted with an eye toward keeping the America’s Cup in the United States, it succeeded for the longest time. Following the first successful defense of the cup in 1870, the United States prevailed 24 times in a row before the Australian yacht Australia II, with its famously winged keel, ended that reign in 1983. The United States won the cup back from the Aussies on the next go-round, in 1987, but in 1995 the trophy ended up back in foreign hands. Fifteen years passed before Ellison’s team defeated the Swiss-owned defender Alinghi in 2010 in Spain and returned the cup to the States.

In 2013, in San Francisco Bay, Ellison’s team retained the cup, winning eight heats in a row to best the Emirates New Zealand team in the best-of-17 match race. However, as Ellison’s team prepared to defend its title again, San Francisco seemed indifferent to hosting a second cup, and talks with other potential U.S. venues were going nowhere. With the time for the 2015 Louis Vuitton World Series fast approaching, Ellison began thinking the unthinkable: Bermuda.

If the idea of bringing the America’s Cup to a tiny island in the middle of an ocean hundreds of miles from a mainland was a shocker to the yachting establishment, Bermudans were, at first, no less stunned. Insurance executive Peter Durhager, now the chairman of the America’s Cup Bermuda Development Authority, recalls his reaction: “It was like, ‘What are you talking about? You’ve been hit on the head with the boom too many times, man.’ ”

This is not to say that Bermuda would not make a lovely setting for a regatta. The hilly, 21-square-mile island boasts marvelous harbors and beaches, clement weather year-round, and the Great Sound, where sailing can take place within clear view of the shore. Bermuda could earn more than just bragging rights by hosting the event: The 2013 races in San Francisco Bay are said to have generated revenues of some $364 million for the host city.

In giving his blessing to Bermuda, Ellison described it as a convenient, meet-in-the-middle point for sponsors and spectators from Europe and the United States, with friendly people. He also noted that it was ideally suited for global telecasts of the event, thereby bringing the sport to a broader audience than ever before.

Quirky, cultured, and incongruously formal, Bermuda has stood apart from other island vacation destinations. It is British but not too British, a place where people drive motorbikes instead of cars, don shorts and jackets for dress-up, and play cricket instead of baseball.

For generations of young Americans, Bermuda’s signature sport was not cricket, sailing, golf, or tennis; it was rugby. As author Stephen Birmingham explains in his book The Right People: A Portrait of the American Social Establishment, Bermuda’s Rugby Week was an annual rite of spring for Ivy Leaguers and other U.S. college students who could muster the round-trip plane fare. It was an upper-class event, and parents had no qualms about allowing their daughters to attend—in chaperoned groups.

“Mother used to lead groups of proper young ladies to Bermuda from the 1950s to the 1980s,” recalls Philadelphia attorney Anthony Geyelin, the son of society writer Mary Virginia Geyelin. “They always stayed at the Coral Beach Club, where gentlemen were never permitted above the first floor. It was great while it lasted.”

Rugby Week lost its quaint charm as pretensions to civility fell away. Bermuda’s beaches became littered with collegians sleeping it off, and the bars resorted to hiring armed security guards to keep order. The island, disillusioned with this later generation of vacationers, pulled back the welcome mat, pointing the way to Fort Lauderdale, Daytona, or Padre Island. Insurance companies and finance firms replaced hotels and resorts as chief employers, with the number of guest beds declining from 9,215 in 112 hotels in 1980 to 5,265 in 47 hotels in 2013.

In 2012 the country addressed the decline in the hospitality business by replacing the government tourism agency with a private body, the Bermuda Tourism Authority. Who could have known at the time that within a year the authority would be preparing for the biggest tourism event in the island’s history?

“It’s not just the economic implications,” says yachtsman Lawrence Trimingham, whose Trimingham’s department store is the island’s largest. “The cup is a perfect fit for our history and our people. It’s the chance for us to regain our brand.”