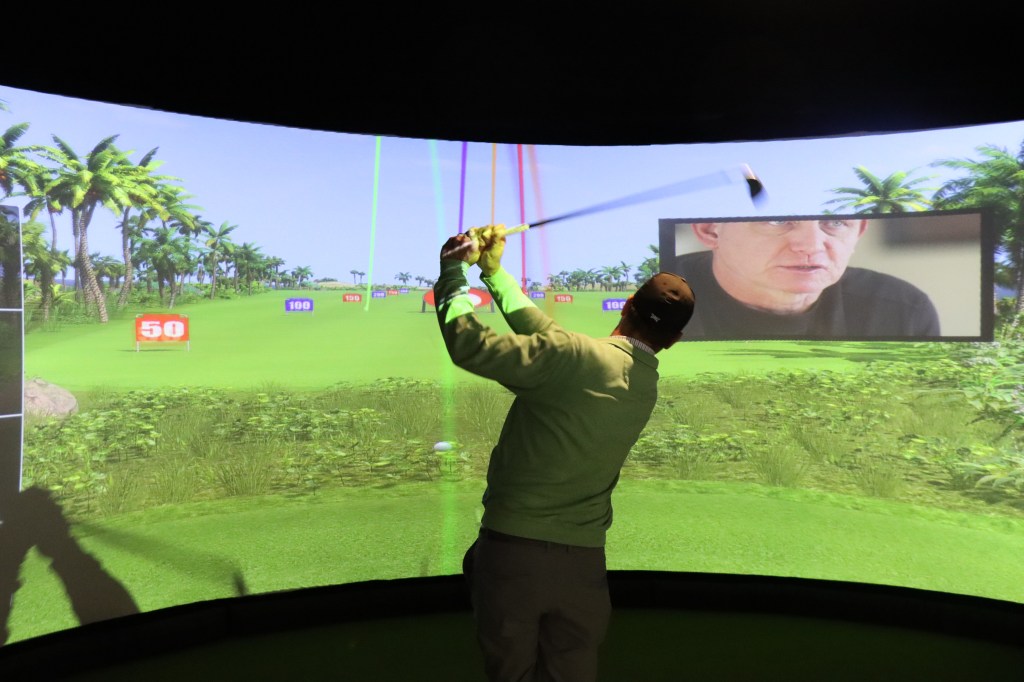 Once upon a time—not too long ago, really—simulator golf experiences were fairly rudimentary. Sure, the ability to play famous courses from the comfort of your own home existed 15 years ago, but the experience that those simulator systems provided left avid golfers wanting more. Those pioneer systems, for example, struggled to accurately simulate the precision of many short game shots around the green, and every once in a while full shots would either fail to register or the technology would inaccurately capture them. Ultimately, the appeal of playing a simulator round back in the mid-2000s was rooted in the opportunity to simply hit golf shots indoors and to keep your swing in mid-season form during the winter. Realistic virtual rounds weren’t really on the table.

A lot has changed since then. Like personal computers, golf simulators are significantly faster and more powerful, and the various technology that they employ today allows for more immersive—and lifelike—rounds of golf to be played, not to mention swing and shot analysis that, quite literally, is game changing. As the simulator market strengthens, more and more manufacturers have entered the fray, yet all are not created equal. Here, we spotlight five of the best.

It should come as no surprise that Trackman—a company best-known for creating industry-leading launch monitors—has developed a powerful simulator, loaded with bells and whistles, that delivers exceptional practice and training programs. The simulator is equipped with one camera and two radars; and through a partnership with Titleist, Trackman has engineered radar capture technology (RCT) golf balls, which allow the company’s simulator equipment to capture 99 percent of a ball’s spin rate. That all but guarantees that shots hit on a Trackman simulator, which starts at $43,900, are projected more realistically than any in other simulator on the market.

Trackman’s simulator also features a dynamic practice range program, where users can simulate specific shots of all lengths and intricacies. The feature allows for purposeful practice on a virtual range that is as detailed as the best real practice areas anywhere in the world. But when it comes to playing simulated rounds, Trackman has also set the bar for realism, as all of the available courses—an ever-growing list that currently exceeds 130 layouts—are mapped using drone technology and are displayed in jaw-dropping high definition. Most notably, Trackman’s portfolio of courses includes hidden gems such as Lahinch Golf Club in County Clare, Ireland; Sebonack Golf Club in the Hamptons; and Bellerive Country Club in St. Louis, Missouri.

Some simulators do a better job of replicating the conditions and the challenges that define a round of golf played out in the real world. And when it comes to simulating shots hit on hilly or uneven ground, the new TwoVision simulator from Golfzon (starting at $60,000) does it better than any other model.

To start, the system’s swing plate can tilt and rotate in 24 directions. That means that when golfers face an uneven stance on the screen, the swing plate will move under their feet to replicate the slope of the terrain. Now, golfers can practice those challenging sidehill lies indoors. Additionally, the TwoVision’s swing plate is equipped with different patches of turf to resemble the different aspects of a golf course. There are two types of rough, as well as two distinctive patches of densely packed, tall bristles that replicate the conditions of both fairway and greenside bunkers. Currently, the Golfzon server features almost 200 courses, including Kingsbarns Golf Links in Scotland and Real Club Valderrama in Spain. The graphics are slightly more arcade-like than what you’ll find with Trackman, but the overall presentation doesn’t lack for realism. The TwoVision model is even equipped with an auto tee and ball retrieval system.

For as much as golf simulator technology has improved in recent years, the knock on most models is the sense of disconnection that exists from the moment a ball is hit into the screen and when the simulated shot is projected onto the screen. In many cases the processing time of the technology creates a lag in the display of the shot, and sometimes the shot’s origin point as it’s depicted on the screen doesn’t align with where the ball actually made contact with the screen. In both scenarios, it’s impossible for the user to ignore the fact that the screen is there. It acts almost like a barrier between the real world and the virtual one.

In its premium simulator model, Full Swing has eliminated that disconnect. The company’s Pro Series of simulators (starting at $54,900) use infrared technology and high-speed cameras, which work in tandem to effectively eliminate lag. Hitting a shot in a Full Swing Pro Series simulator feels as though you’re hitting a golf ball through the screen, not into it. The infrared tech, which utilizes 688 sensors, measures the ball mid-flight at the speed of light and allows the system to project the origin of the shot at the point of impact between ball and screen. The high-speed Ion3 camera captures club and ball launch data at the point of impact and also records an HD video of the club through the impact zone for post-swing analysis. No wonder these simulators are endorsed by some of the PGA Tour’s best players—a group that includes Jon Rahm, Jordan Spieth and Tiger Woods.

If we were to play the word association game with aboutGolf’s aG Curve simulator (starting at $62,750), the term that first comes to mind is versatility. The simulator’s curved screen, which can be custom built to fit most residential spaces, allows for an even more immersive virtual golf experience, as the displayed course now extends into a golfer’s periphery. Beyond that, the simulator’s curved shape allows for even more screen surface area, and with picture-in-picture functionality, the aG Curve makes it even easier to watch live sporting events while playing a virtual round of golf on a bucket-list course.

Speaking, of courses, aboutGolf’s portfolio currently extends beyond 75 layouts; however, accessing almost a third of them requires an annual subscription. Most golf enthusiasts will deem that subscription necessary, as it opens up access to courses such as Whistling Straits, Harbour Town Golf Links, the Ocean Course at Kiawah Island, and Bethpage Black. Subscription-only courses also include Ryder Cup editions of Gleneagles Centenary and Hazeltine National, which means golfers can play those layouts with all of the spectator seating and grandstand areas in place.

While aboutGolf’s simulators provide a high-quality virtual golf experience, they’re the best option for homeowners who are looking for a simulator that can also function as a traditional home theater and an entertainment space equipped with other virtual games.

Not every golf enthusiast has the desire—or in some cases the interior space—for a fully built-out, permanently installed simulator. Many avid players living in the northeast, for example, only yearn for one during the late fall and winter months. The rest of the time, those players will be outside logging rounds on the course.

For those who fit that description, Foresight Golf’s Sim-In-A-Box is the ideal solution. The simulator is supported by Foresight’s GCQuad launch monitor and the simulation software, FSX 2020, delivers lifelike graphics and animations. The product requires an area measuring 16 feet deep, 13 feet wide, and 9 feet tall, and the entire simulator setup can be easily erected and broken down.

Available in a variety of packages that start as low as $8,999 (excluding the cost of a launch monitor), the Sim-In-A-Box serves as an ideal solution for homeowners on a budget. The Eagle Plus Package ($25,000) includes the GCQuad, a full simulator setup (frame, impact screen, premium projector, turf strip, Fiberbuilt hitting matt, and computer cart) a gaming-optimized desktop computer, the FSX 2020 simulation software, and access to 25 courses, including several Open Championship venues, Pebble Beach Golf Links, and Spyglass Hill Golf Course.