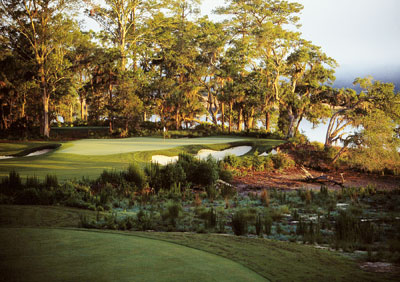 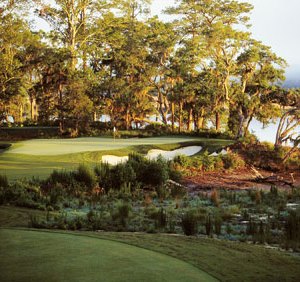 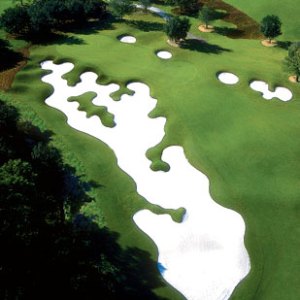 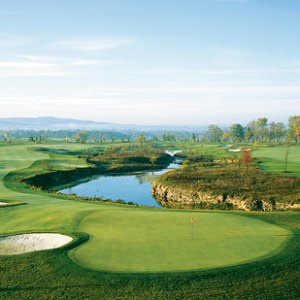 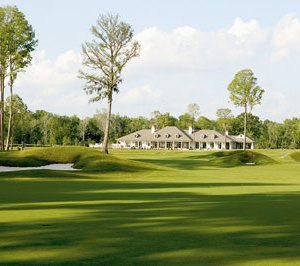 The chasm of an abandoned rock quarry drops precipitously near the first hole at Sandy Lane’s new Green Monkey golf course. From the vantage point of the hole’s putting surface, the adventure that awaits you on this Tom Fazio design is evident, but you will have to settle for seven ocean-view holes before descending into the pit of this stunning Caribbean course.

One of two Tom Fazio tracks at the 112-room, plantation mansion–style Sandy Lane resort on Barbados, Green Monkey opened to the hotel’s guests in the spring of 2004. The new course surpasses its Country Club predecessor in both style and substance, largely because of its coral stone–quarry setting. The man-made canyon is a dominating presence on the course, with more than half of Green Monkey’s holes either running along its lip or diving into its depths.

The quarry first comes into play on the eighth hole, a par-3 that falls dramatically off to the left and into the pit. Holes 9 through 11 and 15 through 17 follow the canyon’s floor, where towering white walls form the sides and backdrops. The balance of the course’s holes roam over exposed tabletop land (formerly sugarcane fields) with sweeping views of the Caribbean.

Measuring nearly 7,400 yards from the masters tees, Green Monkey is as challenging as it is visually impressive. The course is named after the primates that wander through the gullies (and fairways) eating bananas and mangoes, but the moniker also refers to the layout’s lush, emerald landscaping. Sandy Lane planted Green Monkey with 3,000 saplings, hundreds of mature trees, and acres of bougainvillea and other verdant vegetation. And while the flora and fauna contribute to an exotic round, Green Monkey’s rock-quarry setting and the sculptor’s touch of Fazio elevate the course to the top of this year’s Best of the Best list.

Jack Nicklaus imported enough sand from his home state of Ohio to fill five acres of bunkers at the new May River Golf Club in Bluffton, S.C. For the remainder of this classic Lowcountry course, however, Nicklaus relied on the surrounding swampland to shape his design.

Part of a new 20,000-acre resort community, and open to guests of the development’s lavish Inn at Palmetto Bluff, the May River golf course weaves through the oak trees and wetlands of a coastal forest, never straying far from its namesake waterway. Nicklaus tailored his design to the terrain’s natural contours and features, moving minimal amounts of dirt, sacrificing few of the forest’s trees, and leaving the area’s marshes and streams intact. The track’s natural hazards—inlets of the May River snaking through fairways, giant loblolly pines obstructing approach shots—prove more challenging than Nicklaus’ bunkers, but no green can be reached without the threat of sand.

With each successive hole, the golf course’s perils seem to multiply while the scenery seems to improve, and few back nines provide a more pleasant stretch than May River’s. The round comes to a close with the 550-yard, par-5 18th hole, where those who attempt to avoid the water on the right may end up, naturally, with an approach shot blocked by the 250-year-old oak tree on the left.

Last year’s opening of the Greg Norman–designed Tournament Course at China’s Mission Hills Golf Club brought to 10 the number of courses at this megadevelopment less than an hour north of Hong Kong. Jack Nicklaus, Vijay Singh, and Annika Sorenstam are among the high-profile personalities behind the resort’s other designs, but Mission Hills has reserved its loftiest expectations for its new Norman layout.

Named for its intended purpose of landing a major international event, the Tournament Course takes advantage of the resort’s rugged terrain. Several holes cut through valleys surrounded by soaring hillsides; others cling to cleared cliff tops with views of the mountains on the hazy horizon. Norman lined his fairways with natural grasses and oddly shaped bunkers that glisten in bright white tones against the deep greens of the surrounding forests. As striking as it is, Norman’s addition to Mission Hills demands attention—even amid a golf complex of 180 holes.

For a Central Florida layout, Tom Watson’s Independence Course at Reunion Resort & Club blazes a bumpy trail. The designer moved considerable amounts of dirt to create the site’s uneven terrain, making the 7,147-yard course, which is located within an expansive resort and residential development west of Orlando, a challenge from any set of tees.

Large, desert-style bunkers run the length of several fairways at Independence, and yawning waste areas require lengthy carries on tee shots. Short games are tested by the course’s ridged putting surfaces and sharp drop-offs from the green complexes. A marksman such as Watson will do well here; the rest of us need to bring our best games.  —George Fuller

“That was a long way to go to work,” architect Tom Doak says about building Barnbougle Dunes on the island of Tasmania, roughly halfway around the world from his home in Michigan. But the course site’s classic links terrain—rolling sand dunes sprinkled with fescue grasses and bordered by three bodies of water—presented an opportunity the designer could not refuse, and he responded with an appropriately masterful layout.

Barnbougle Dunes cuts between an ocean strait, the Forester River, and an inland estuary on Tasmania’s north coast. Massive sand dunes, some 40 feet high, line the fairways on the front nine, while the back nine plays on top of the dunes. Here, where the holes are less sheltered from ocean winds, the experience is reminiscent of a round on a coastal course in Scotland. Unlike in Scotland, however, golfers at Barnbougle share the fairways with platypuses and kangaroos, which serve as reminders that you are a long way from home.  —George Fuller

When the Oneida Indian Nation in upstate New York hired Tom Fazio to design the third golf course at its fast-growing Turning Stone Resort & Casino near Syracuse, the Native American group allowed the designer to select a site from among its 17,000 acres of land. Fazio chose an open, seemingly barren stretch of real estate, but his pick has proven a wise one. The architect’s new Atunyote Golf Club (atunyote means eagle in the Oneida language) is rife with meandering brooks, and the site’s deadwood marsh presents a dramatic setting for the course’s closing holes. And while the landscape is wide open, fairways are narrow and littered with water and bunkers. The hazards, and Atunyote’s undulating greens, can make a round on this casino course a game of chance.  —James Y. Bartlett

Bunker Down on the Bayou

Located just 15 minutes from New Orleans’ famed French Quarter, the Tournament Players Club of Louisiana is one of the few big-time golf courses in the Big Easy. The new layout, which is hosting this year’s Zurich Classic on the PGA Tour, was a joint effort between Pete Dye and PGA professionals Steve Elkington and Kelly Gibson, the latter a New Orleans resident. Like many southern courses, the TPC occupies a flat, marshy stretch of land lined with pine, oak, and cypress trees, many draped in Spanish moss. Dye and company peppered the 7,520-yard track with 69 pot bunkers and waste areas that run in wide swaths from tee to green, adding ample flavor to this new Cajun classic.

Raffles Hotels & Resorts’ new Canouan Island development in the Grenadines is the Singapore-based company’s first Caribbean property and its first resort to include a golf course—and it represents worthy debuts on both fronts. The property’s Trump International Golf Club, a private course owned by Donald Trump but open to guests of the resort, is a Jim Fazio redesign of an existing course that paired 18 tees with 11 greens. No vestige of the original remains—even the grasses have been changed—and Fazio’s new track wends through three distinct settings on this small island 120 miles southwest of Barbados.

The long, narrow fairways of holes 1 through 10 occupy an emerald amphitheater overlooking Godahl Beach. But the front nine, despite its slope rating of 137, is merely a warm-up for the back, which is rated at 153. The 11th fairway climbs the flank of Mount Royal, leading to the spine of a breezy ridge and a series of spectacular holes. After reaching its peak at 500 feet above the water on the 13th tee, the course drops, twists, and turns through jungle terrain, lingering for three holes in an open bowl where streams cascade into a lake.  —Dale Leatherman

Planted since the mid-19th century, the Renault Winery outside of Atlantic City is one of the country’s oldest vineyards. The winery’s owners added a Tuscan-style boutique hotel to the property in 2001 and, last year, unveiled their delightful Vineyard Golf at Renault course.

Bear Went Over the Mountain

California’s Sierra Nevada range provides a magnificent backdrop for Jack Nicklaus’ Old Greenwood course, a dramatic high-elevation layout set in a 600-acre residential community near Lake Tahoe. Measuring more than 7,500 yards from the back tees, the routing wanders through towering pine trees and open fields of sage, and past four lakes connected by streams filled with trout. The course’s 6,000-foot elevation, where shots can travel 15 percent farther than at sea level, can help make the course seem shorter than its measured yardage, but the challenges presented by Old Greenwood’s lakes, streams, and trees more than compensate for any extra distance you might gain from the tee. Out of respect for its surroundings, Old Greenwood (which is open to nonresidents) has adopted an Audubon-certified “green” program intended to preserve the area’s wildlife habitats—as well as provide an unspoiled environment for golfers. —George Fuller