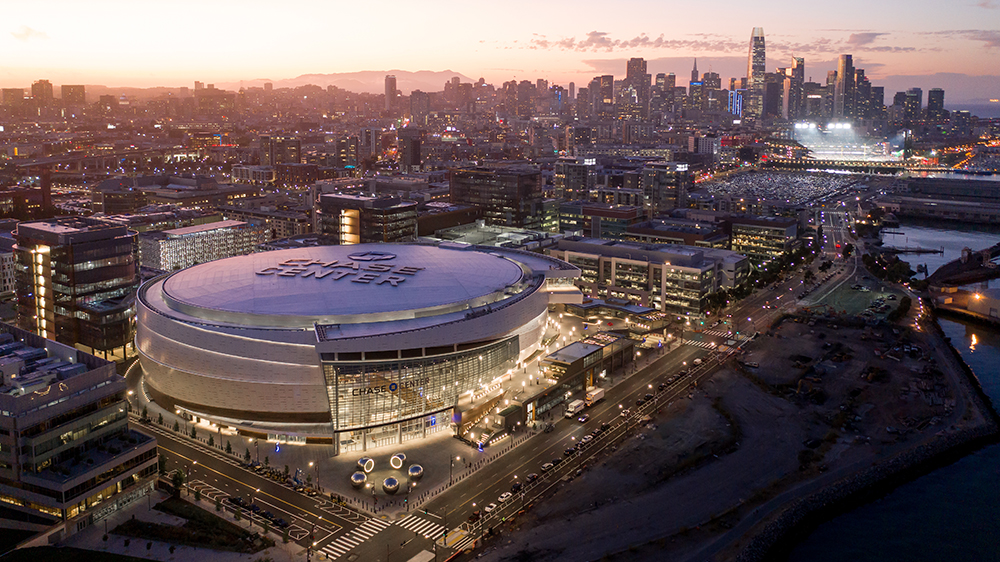 The wine has run out. This is no cause for alarm. The butler can fetch another bottle from your private vault a few feet away or dip into the cellar filled with $450,000 worth of it, also at your disposal. While you wait, there’s a cocktail created by a James Beard Award–nominated bartender and dinner to be enjoyed at the crisp white quartz table surrounded by walnut cabinets. But don’t linger too long—you don’t want to miss tip-off. You’re here for the game, after all. Fortunately, on the nine TV screens covering one wall, a camera beams back a live view of the court, which is just steps from this suite inside the Golden State Warriors’ gleaming new arena in San Francisco. It’s a reminder that this is a sporting event and not an evening with friends at Soho House.

This season, the Warriors’ Chase Center will offer select NBA fans one of the premier in-game experiences in sports. And it’s no anomaly. In venues around the world, bleachers and hot dogs have been replaced with well-appointed suites and artisanal fare.

A new era of sports venues and hospitality has arrived, pointing to the future of attending a game. Fierce as the competition on the court and field can be, teams have realized their most important  fight is creating a game-day experience that outshines all other entertainment options in town—and on the enormous HDTVs at home. And they need to, because they’re chasing a customer base that’s more discerning than ever.

This premium era of sports—taking the largely populist experience of going to a game and turning it into a luxurious one—began out of necessity. As player salaries rose in the 1970s, so did the need for teams to find new ways to generate revenue. They began designing a ring of suites and/or club seats into venues, increasing comfort and maybe adding some better food, or at least a few more options.

That soon evolved into teams realizing just how inordinately valuable suites and seats close to the action  could be, especially in basketball. “The NBA is really interesting. I think we practice what I would call the ‘Robin Hood School of Pricing,’ ” says Warriors president and COO Rick Welts. “We  are able, for a very few customers, to charge a premium for a real premium experience. And that, in effect, subsidizes the cost of all the other seats in the building.” But to charge the higher price—courtside suites go for $1.5 million to $2.5 million per year—the in-game experience had to be about more than just a closer seat. Teams that didn’t realize this suffered the consequences.

In the mid-1990s, the NBA’s Seattle SuperSonics worked with the city to overhaul and modernize the Seattle Center Coliseum, an arena built for the 1962 World’s Fair. The Sonics touted the newly christened KeyArena as an intimate place to watch a game, convinced it had solved its venue problem. It took only about a decade for the team to realize it had built an arena for an outdated model.

Sure, there was a ring of the customary suites, but the premium experience ended there. Courtside season-ticket holders—people who might pay north of $60,000 per year for a pair of seats—got the chance to have some Coors Light out of kegerators in a concrete crypt hidden in the bowels of the arena at halftime and not much more. The Coliseum couldn’t compete for entertainment dollars against the brand-new stadiums the Seahawks and Mariners had erected a few years earlier. Without an arena able to compete economically, Starbucks impresario Howard Schultz sold the Sonics, and the new owners moved the team to Oklahoma City.

Warriors owners Joe Lacob and Peter Guber faced a similar problem when they bought the Warriors in 2010. “We had the oldest arena in the NBA. It was a great place to play. It still is. And we love Oracle in many ways, but the modern amenities were not there,” says Lacob, who made his money as a venture capitalist at Kleiner Perkins. “It had one kitchen to serve 19,596 people. In the end, food and all the other stuff that goes along with an arena matters.”

It especially counts because the Warriors are part of a new paradigm  of privately funded venues. “Cities, counties and states started getting out of the business of building stadiums and arenas, and once that happened, there was a significant debt service on the building that had to be covered,” says Ron Turner, a four-decade stadium-design veteran at architecture firm Gensler. This shift has accelerated, turning attending a game into a premium product to jolt revenues.

So across sports you’re seeing an escalation of luxury amenities. “While the gate revenues are projected to increase across the five top US pro leagues in the next five years, luxury and premium revenue will probably triple that,” says Matt Cacciato, director of  the master’s program in sports administration at Ohio University. “Teams are depending on luxury revenues to outpace normal gate revenues.” Since 1995 premium-seating inventory across the NBA, MLB, NFL, MLS and NHL has nearly doubled, and it now makes up 40 percent of all  ticket revenue, according to a 2016 PricewaterhouseCoopers study. The secondary-ticket market for Warriors’ opening night at Chase Center is an indication of the money that premium seats can command compared to seats elsewhere: At press time, a ticket in  the upper bowl for the season opener could be had for $225, while courtside seats cost as much as $19,000.

In many venues, that price doesn’t just get you a seat. In Jacksonville, the Jaguars have cabanas with a pool; in Miami, the Dolphins have “Living Room Boxes,” where fans sit in lounge chairs at the 35-yard line with TVs; Arthur Ashe Stadium, home of the tennis US Open, has a suite with a private sushi chef; and the new digs for London soccer club Tottenham Hotspur includes among its amenities a members-only club where  a select few can dine behind one-way glass next to the players’ tunnel, so you can watch the team prepare for the game before they walk out onto the pitch.

Chase Center’s crown jewels are its courtside lounges, which go for up to $1.5 million more than the traditional top-level box suites and serve as private hideaways for people buying some of the best seats in the house. The team went even further in designing the arena. “In the past, whether you were in a stadium or arena, there were two premium experiences they were providing,” Turner says, referring to courtside seating and box suites. “In Chase Center, there are 17. That’s the evolution of the premium experience. There has to be variety because not everyone wants the same thing.” So the Warriors built new tiers of offerings for smaller groups, like “Theater Boxes,” where a private dining table for four (with waiter service) is on one side of a wall and on the other side are four court-facing seats, or the open-air Modelo Cantina, where reservations include a more comfortable seat and food at the shared club space.

And now we’ve arrived at a time where teams have incorporated the first wave of luxury amenities, from better physical spaces to better food. The next phase will home in on service and the strategic deployment of technology to enhance all that—from Wi-Fi that actually works to apps for ordering food to one-on-one interactions between a helpful staff and demanding fans.

“We’ve invested a lot in training employees, myself included, to the level of service you’d expect heading into a Disney theme park,” Welts says. “Because that’s the most important thing we can provide, except maybe the team winning.” Though the Warriors haven’t had that problem of late, these new stadiums and services can also insulate teams from the boom and bust of winning one season and losing the next. “Some teams that are underperforming are propped up by the game-day experience in the stadium,” Cacciato says.

The Warriors’ gambit to preserve that experience could be the most forward-looking design element of Chase Center. The team took the counterintuitive step of offering fewer of the hottest tickets in the Bay Area. In the move from Oakland to San Francisco, the Warriors made the arena 1,500 seats smaller so  it would be more intimate and exciting. That also allowed for more communal areas such as the courtside suites and the ample lounges where courtside ticket holders can gather to dine before the game. “We’re finding stadiums getting smaller and smaller. But the socialization spaces in the stadium are getting bigger and bigger,” Turner says. “People want  to move around. They want to text their friends and say, ‘Look, I’m over here at this club. It’s cool, why don’t you come over?’ That’s how people want to enjoy these events.” Perversely, the future  of buying a great seat at a sports stadium may be the freedom to sit in that seat as little as you’d like.