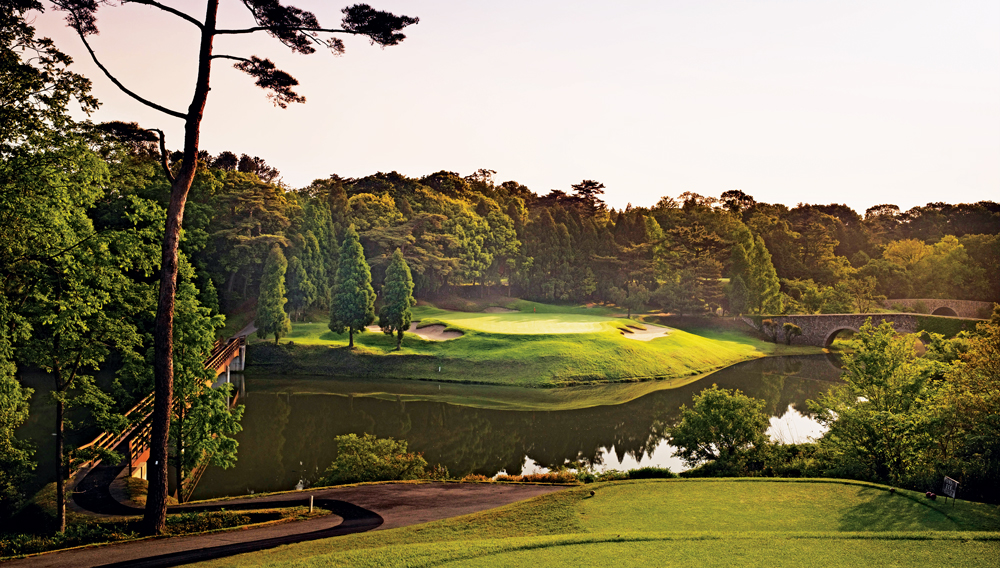 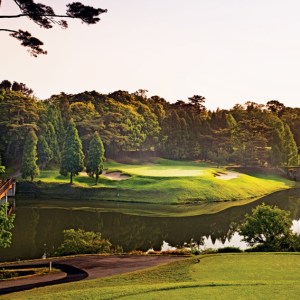 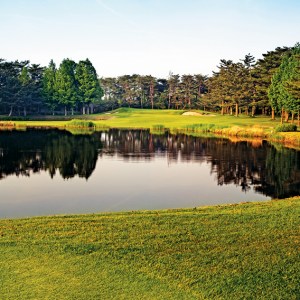 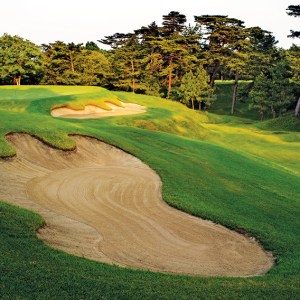 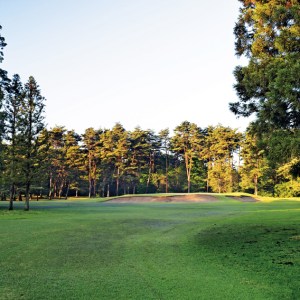 Japan’s high temples of golf are breaking down the barriers to entry for foreign golfers.

Sizing up a birdie putt on the ninth green of the East Course at Kasumigaseki Country Club, I had a realization: This could be one of the best rounds of my life. Kasumigaseki, which is located about 30 miles northwest of Tokyo, will be the host course when the Olympic Games come to Japan in 2020. The club is one of the few in the country that still features two greens on each hole—one planted with grass best suited for warm weather, the other featuring a more durable turf for play during colder months (a common practice before the advent of hybrid grasses). I was playing the easier set of greens and had managed, through nine holes, to avoid the densely grown trees that line the course’s expansive fairways, as well as its infamous bunkers, which are brutally wide. A heavy, wet October air enveloped the course, which made each hole play longer than its yardage but also made the greens more receptive to approach shots. Aggressive putting had rewarded me to that point, and on cue, I watched as my ball rolled into the hole for birdie.

With the front nine complete, I was only 2 over par. Swinging well and full of confidence, I nearly sprinted to the next tee, leaving my caddie behind. Awaiting me was one of the course’s defining holes, a short par 3 that requires a tee shot over water to a raised, undulating green surrounded by a ring of those insidious bunkers. But just as I was beginning to visualize my tee shot, my caddie, who was pushing my clubs on what looked like a giant grocery cart, caught up to me at the tee box. “No,” he said. “You must stop. Go to clubhouse. Have lunch. Come back 45 minutes.”

The sport of golf may be universal, but not all cultures approach it the same way. This forced lunch break was my first introduction to the game as it is played in Japan. There was no way around stopping for the meal, so completing the round of my life was just going to have to wait.

Japanese fanaticism for golf is widespread. Three-tiered driving ranges are common throughout the country, especially in the major cities. High-end shopping districts often include golf boutiques that sell gold-plated clubs priced at $1,000 apiece, and it is not uncommon to see businessmen using umbrellas to practice their swings while waiting for commuter trains. For as much as the country embraces the game, however, it has not always embraced foreign golfers hoping to play there; travelers to Japan have historically found it difficult—if not impossible—to gain entry onto the country’s top courses.

But golf in Japan is facing many of the same challenges that the game is encountering in the United States—obstacles such as time, money, and an uninterested younger generation that prefers video games to real games and has little patience for a sport that cannot be mastered. In these issues, however, lies opportunity, particularly for the traveling golfer who wants to play at Japan’s most exclusive clubs.

In researching my golf trip to Japan, I set my sights on playing the country’s top three private courses: Kasumigaseki, the neighboring Tokyo Golf Club, and Hirono Golf Club, which is located about 40 miles west of Osaka and is considered by many to be Japan’s best layout. Private clubs in Japan have traditionally required that guests play with members. More recently, however, they have been requiring only an introduction for nonmembers to play a weekday round, which, for the three courses in my plans, typically costs $350 per person including the greens fee, caddy fee, and taxes. A broad Internet search for ways to play Tokyo Golf Club, as well as Japan’s other exclusive courses, revealed a handful of websites claiming that their companies could make introductions with members of these exclusive clubs. I had heard that several such companies were unreliable; Esprit Golf, which I ended up selecting, came through on every promise.

Esprit Golf was founded by Masako Takei, who went to college in the United States, returned home to work in finance, and—after taking up golf—saw an opportunity to help Japanese golfers who wanted to play overseas. Her principal business involves organizing golf trips from Japan, mostly to Pebble Beach, St. Andrews, and destinations throughout Asia. But for foreign golfers traveling to Japan, Takei can make introductions at courses like Kasumigaseki, Tokyo Golf Club, and Hirono, either on an individual basis or as part of a package that can also include accommodations, transfers, and an English-speaking guide.

“We can get tee times at Japan’s leading courses,” Takei explains, “but we have to make sure that our ads don’t look like we accept anyone. Private clubs like Kasumigaseki will never be truly ‘open’ to the public, but they will welcome foreign guests if they are referred by members. Often times, we ask the prospective guests who they are, asking for their portfolios. Once at the clubs, the members will be very welcoming, but we have to treat them as if they really are guests of a member.”

My host at Tokyo Golf Club was Mori Otaki, a member of the club who spent part of his career in the United States and is now on a committee tasked to promote and invite visitors onto the course. “Since almost all the golf clubs here are struggling financially, they would like to accept as many visitors as possible while keeping the members happy,” he says. “Even the more traditional clubs are starting to work harder to attract visitors.”

About 2,400 courses exist throughout Japan, the majority of them private. Kasumigaseki, Tokyo Country Club, and Hirono Golf Club all trace their greatness to Charles Hugh Alison, a British golf architect who came to Japan in the early 1930s. He designed Hirono, improved Kasumigaseki, and heavily influenced local architects like Kohmyo Ohtani, who designed Tokyo Golf Club. Alison was fascinated by Japanese culture, working many of its principles into his designs, and all three courses are striking in their natural beauty and simplicity. Each features Alison trademarks—elevated greens, hazards set at angles so players have options when confronting them, and large, deep bunkers known in Japan as “Alisons”—but offers its own unique challenges.

Compared with Kasumigaseki, Tokyo Golf Club has tighter fairways and holes that have more bend from tee to green. Each hole features only one green, and they are generally smaller than those found at Kasumigaseki. Hirono deserves its billing as the country’s top course and often draws comparisons to Pine Valley in the United States. The layout is defined by dramatic elevation changes and blind tee shots. Alison’s bunkers are very much in play, but fast-rolling greens will still challenge players who are lucky enough to avoid the sand.

Each club is well prepared for guests, with rows of visitor lockers and credit-card scanners, although the pro shops are not up to U.S. standards, offering little more than a few shelves of balls and some unattractive shirts. The clubs do feature large communal baths adjacent to the locker rooms—a mid- or post-round bath is often a part of the Japanese golfing tradition. Guests must be invited into those areas of the club, and, regrettably, I was not.

Rather than a mid-round bath at Kasumigaseki, I reluctantly returned to the sparsely decorated clubhouse restaurant, sat down at a table by myself, and immediately attracted stares from members at nearby tables. With nothing to look at—and nothing to read—I devoted equal amounts of attention to the plate of beef curry in front of me and the slow passage of time on my wristwatch. Finally, with my lunch and wait over, I returned to the 10th tee to continue my round.

After 45 minutes seated at a dining room table, my body had grown stiff, and the groove that I had enjoyed on the front nine was gone. The imposing 140-yard tee shot, slightly uphill to that treacherous green surrounded by those oh-so-punitive bunkers, required an 8-iron, except that with a lack of rhythm to my swing, I pulled the shot onto a hill left of one of the bunkers.

The 10th set the tone for the remaining eight holes of the day. My drives on the back nine lacked the same zest that they enjoyed on the front, and my putts flirted with the edges of the holes but never fell. Two hours after lunch, what began as a possible great round had finished as a merely good one.

Yes, the Alison-designed bunkers are penal, the forested areas dense, and the greens quick and undulating; but for foreign travelers lucky enough to play Japan’s premier private courses, the greatest obstacle standing in the way of a well-played round may be a steaming plate of beef curry.