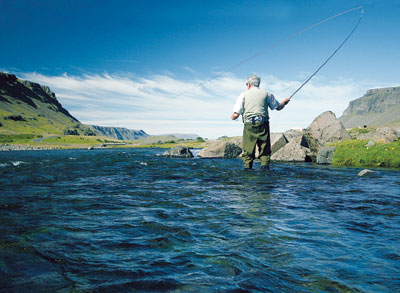 With a boast from one of the soon-to-be partners, Joe Janciuras and Fred Balling began their foray into the replica reel business. After seeing one of Balling’s fly reel auctions on eBay in fall 2004, Janciuras, a retiree in New York state, contacted the West Cornwall, Conn., vintage fishing tackle dealer and asked if he had any other interesting reels in his collection. Balling, now 64, responded by sending images of his Edward vom Hofe aluminum fly reel, one of three produced by vom Hofe, a New York City reel maker who was active from 1867 to 1920. Janciuras, now 60, looked at the pictures and declared to Balling, “I can build that reel easily.”

Balling, who considers the aluminum vom Hofe the rarest fly reel in existence, recalls how Janciuras’ assertion startled him. “You meet a lot of kooks in this business,” Balling says. “I thought he was a blowhard. I told him, ‘Nobody can make a reel like that. Even the original guy gave up after making three.’ ” He explains that vom Hofe began experimenting with aluminum in the late 1880s and discontinued the reels when he could not secure a consistent, high-quality supply of what was then an exotic new metal.

As evidence of his ability, Janciuras mailed to Balling an exact replica he had made of a 95-year-old Hardy English fly reel. The dealer, convinced that Janciuras was neither a kook nor a blowhard, then sent him a large (31¼8-inch) trout reel that vom Hofe built circa 1900 and that is worth from $6,000 to $8,000. Janciuras took the reel apart to examine the handiwork and then quickly lost interest in fashioning the comparatively less elegant Hardy replicas that he had been making, and instead concentrated on producing vom Hofes. (He has since reassembled and returned the reel to Balling, who claims that it now “works better than ever.”) In the last 15 months, Janciuras, who used to own and operate a tool and die shop, has built two dozen replica reels, the most recent of which required about 45 hours to complete. Balling handles orders and marketing for their business, the Perfection Fly Reel Co., freeing the publicity-shy Janciuras to build them. “I was intrigued with the quality of Janciuras’ work, and I hope the fascination rubs off on somebody else.” Apparently it has; there is a three-month waiting list for the reels, which are priced from $2,750.

Little is known about vom Hofe himself (Balling says no photographs of him exist), and sales records and other vital documents from his New York shop, which he sold in 1939, are missing and possibly destroyed, but his reels testify to his talent. Without the sales records, it is impossible to know exactly how many reels vom Hofe produced, but Balling estimates that he made from 2,000 to 3,000, and he believes that most have survived. Working with noisy steam-powered equipment largely before the arrival of artificial light, vom Hofe produced reels that included the silent-tension drag system, his patented feature that helps an angler catch, control, and land a fish by allowing smoother and more accurate reel adjustments.

Janciuras relies on modern equipment, but unlike vom Hofe, who Janciuras believes relied on others to produce some parts, he works alone. However, he feels that only recently has he been entrusted to operate solo on the shop floor. “Did you ever have the feeling when you’ve worked for someone that they’re over your shoulder, watching you, and when you get it right, they leave? I felt I had the presence of vom Hofe in the garage, keeping an eye on me,” Janciuras says, expressing concern about how odd his statement might sound but pressing on nonetheless. “I felt him leave about two months ago. I think he left because he could see I had it all figured out.”