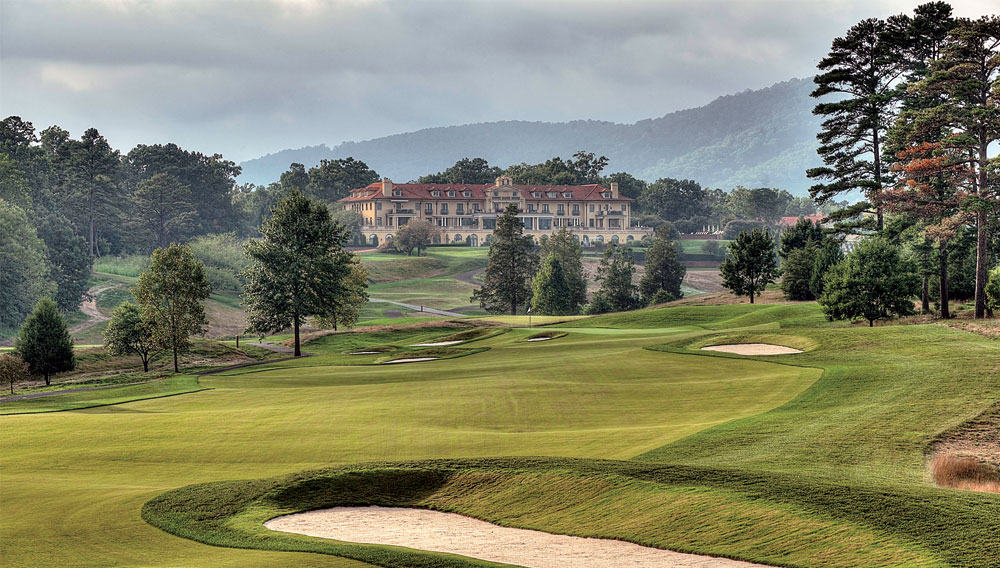 In Virginia’s hill country, a refined design from a revolutionary architect.

Considering the sport’s roots in the British Isles, golf might not have appealed to Thomas Jefferson. But if the third president of the United States were alive today, the farmer in him would certainly appreciate the game’s advanced agronomy. As an attorney, he would understand its obsession with rules and decorum. And as an amateur inventor, he would be intrigued by its technology.

The author of the Declaration of Independence would also admire Pete Dye, a fellow self-taught architect who has long put a revolutionary spin on the designing of golf courses. Dye’s latest creation, Full Cry at Keswick Hall, sits nearly in the shadow of Jefferson’s magnificent home, Monticello, in the hill country of central Virginia, near Charlottesville. With one visit, it is easy to understand Jefferson’s love for his ancestral landscape—and to appreciate Dye’s masterful handling of it. Those expecting Dye’s trademark touches—deep pot bunkers, railroad ties, devilish mounding—will be surprised by Full Cry, which opened in August after a complete redesign of an existing course. The new layout is deceptively benign in appearance, with wide fairways and ample greens that flow across gentle elevations. But trouble lurks thanks to the architect’s subtle use of angles and minimal but high-impact bunkering. From many tees, the necessary shot looks obvious and accomplishable; it is only after falling a few feet short, or discovering a disconcerting hanging lie, or facing a lengthy putt across a hard-to-read green that it becomes apparent to a player that the 89-year-old fox has won the battle again.

Full Cry—the term comes from fox hunting, long popular in this part of the Old Dominion—has six sets of tees, from 4,800 yards to more than 7,100, making it pleasantly playable for any golfer. One Dye trait very much in evidence is the relationship between the tee and trouble, meaning that choosing the right starting point can greatly enhance one’s enjoyment of the course.

Keswick Hall offers a number of ways to celebrate or commiserate after a round on Full Cry. The 48-room hotel, which is set in a stately 100-year-old mansion, is the epitome of elegance, with discreet service to match. The property provides ample dining and drinking options, as well as a spa, seven tennis courts, croquet lawns, pools, gardens, walking trails, and more.

The area surrounding Keswick Hall offers history in every direction—not only Monticello but also James Monroe’s Ash Lawn–Highland, James Madison’s Montpelier, the University of Virginia (which Jefferson founded and designed), and Civil War battlefields—as well as craft breweries and wineries. Jefferson, after all, appreciated the pursuit of happiness.