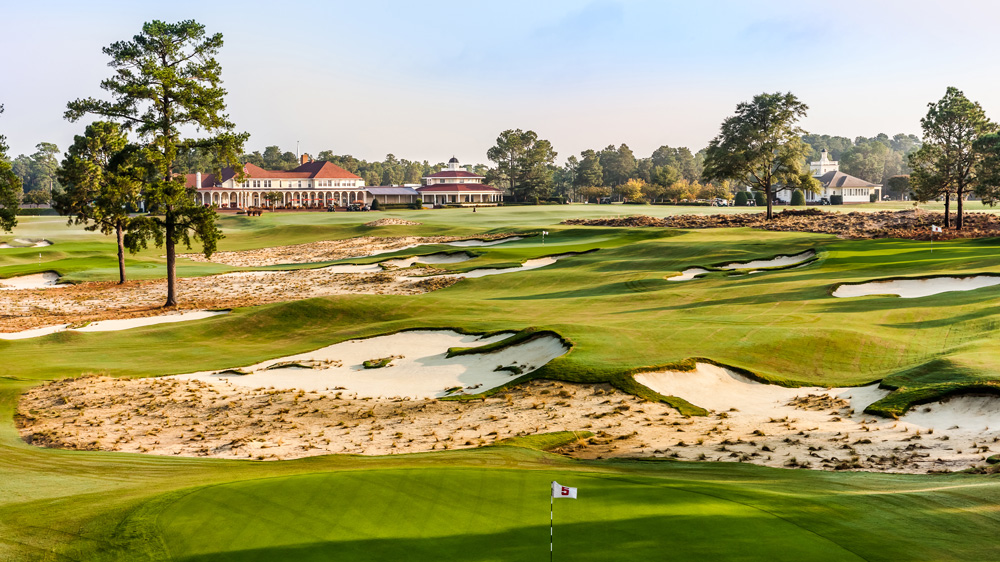 Pinehurst Resort in North Carolina bills itself as “The Home of American Golf,” so it’s fitting that its new short course has been dubbed the Cradle. Designed by Best of the Best winner Gil Hanse, the Cradle’s look will be familiar to anyone who watched the U.S. Open in 2014, when the team of Bill Coore and Ben Crenshaw (the team behind the recent Sand Valley course) returned the famed No. 2 course back to the way Donald Ross intended it. Hanse is another architect from the “minimalist” school of design and is the most sought-after architect in the business these days, especially on the heels of his Olympic Course in Rio.

The Cradle is a nine-hole short course with holes measuring from 56 to 127 yards. Placed just steps from the clubhouse, it features more contour than you might expect from the softly rolling landscape, with lily-pad-like greens popping up along the surface, their flagsticks standing at attention.

“The directive from Pinehurst was, ‘Hey, let’s give players the landscape that was so wonderfully restored on No. 2 and give players the chance to practice hitting shots out of wiregrass or scrubby ground and hit some putts on turtleback greens,’” says Hanse. “But it wasn’t intended to be a knockoff of No. 2.”

By giving it such prime real estate, Hanse knew the course was a significant investment on the part of the club—and he has delivered. The short course is, in some ways, a beautiful little brother to No. 2, with clean, contoured greens and just enough of the rough look associated with minimalist course design. Flanked by the Thistle Dhu Putting Course (also recently renovated), the Cradle not only provides players with a chance to sharpen their short-game skills before playing one of the world’s most demanding short-game courses, but it’s also a fun way to settle those bets—or tack on a press—after your round. Heading away from the clubhouse, Cradle players will see the immaculate resort in all its glory as they try to stick wedge shots close to the hole and sink putts.

Pinehurst is a golf mecca, but it doesn’t suffer from pretension; few places exude such a sense of history and fun right when you step on the grounds. The best part of visiting is seeing how many families with young children roam the resort, proving that great golf doesn’t have to mean stodgy and staid.

Upgrades to the resort’s dining amenities include the Deuce—an open-air bar and patio that overlooks the 18th green of No. 2—where diners cheer and jeer foursomes as they come in from their rounds. There’s even a new brewery in the works at the site of an old steam plant on the edge of the village.

Next fall, if all goes according to plan, the fun will be turned up even higher, as Hanse has already embarked on the renovation of No. 4—a course with more elevation change than just about any property in the Pinehurst collection. The goal will be to pare the grass back, reimagine some of the green contours, and reshape some holes.

“It should be ready to be the second course at the 2019 U.S. Amateur,” Hanse says, a reminder that no matter what’s added to Pinehurst, championship golf is always at the forefront.