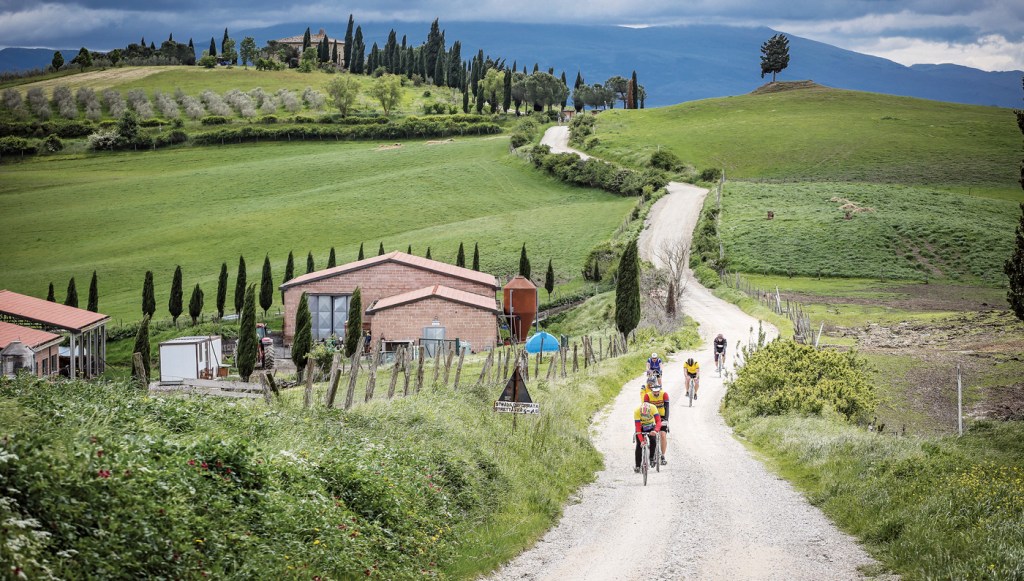 The undulating hills of the Val d’Orcia appear a patchwork of purple-tinged vineyards and plots of plowed earth as I climb the road to Pienza. “They call it the ideal city,” says Massimiliano Mondet, a cycling guide for Rosewood Castiglion del Bosco. The hilltop town—a Renaissance utopia commissioned by Pope Pius II—is certainly idyllic, with its stone piazzas and sweeping views of the valley, a UNESCO World Heritage Site. But as I pedal my carbon-fiber Focus bicycle into Pienza, my mission is not a leisurely lunch and sightseeing tour. Rather, I am training with Mondet for L’Eroica, a noncompetitive race that takes place each October in the hills of Chianti.

L’Eroica (Italian for “the heroic”) is a 129-mile tour that requires participants to ride vintage bicycles—any model made before 1987 will qualify—through the region’s relentless hills and unpaved strade bianche (white roads). The race starts and concludes in the picturesque village of Gaiole, with ample elevation changes in between. “When you’re going uphill, don’t stand up or your wheels will slip,” Mondet advises me. “There’s a hill after the rest stop in Panzano that I still haven’t been able to ride up all the way.”

Unlike L’Eroica, the new cycling programs at Rosewood Castiglion del Bosco have decidedly few requirements. Launched last summer, the two-wheel experiences take cyclists of all skill levels to such destinations as the vineyards of Montalcino and the medieval villages of the Val d’Orcia, and often include tastings of local Brunello di Montalcino and pecorino cheese along the way. For cyclists seeking a more demanding ride, Castiglion del Bosco also offers custom training programs, including for races such as L’Eroica. Regardless of the challenge, guests of the resort—which Rosewood acquired last year—can expect such post-cycling comforts as an infinity-edge pool and a subterranean spa.

The morning of L’Eroica, I set out for the starting line dressed in a vintage blue wool jersey. A few test laps on my 1950s Berga remind me of the challenges a vintage bicycle poses: My silver-and-blue ride weighs nearly twice as much as the Focus I trained with the day before. But when the race begins, adrenaline propels me forward.

I am still going strong several hours later when the route passes through the village of Panzano—where the famous butcher Dario Cecchini offers hungry cyclists lard spread on country bread—and turns toward an unpaved path. As I begin the climb Mondet warned me about, I shift into the lowest gear. A man in front of me falters and falls to the side, breaking my momentum and forcing me onto my feet, but I hop back on and pedal forcefully, remembering Mondet’s advice to stay seated.

Two miles later I crest the hill. At the top, a suspendered spectator cheers as I pass him by. “Buon lavoro!” he yells. The praise is just enough to push me heroically to the finish line.