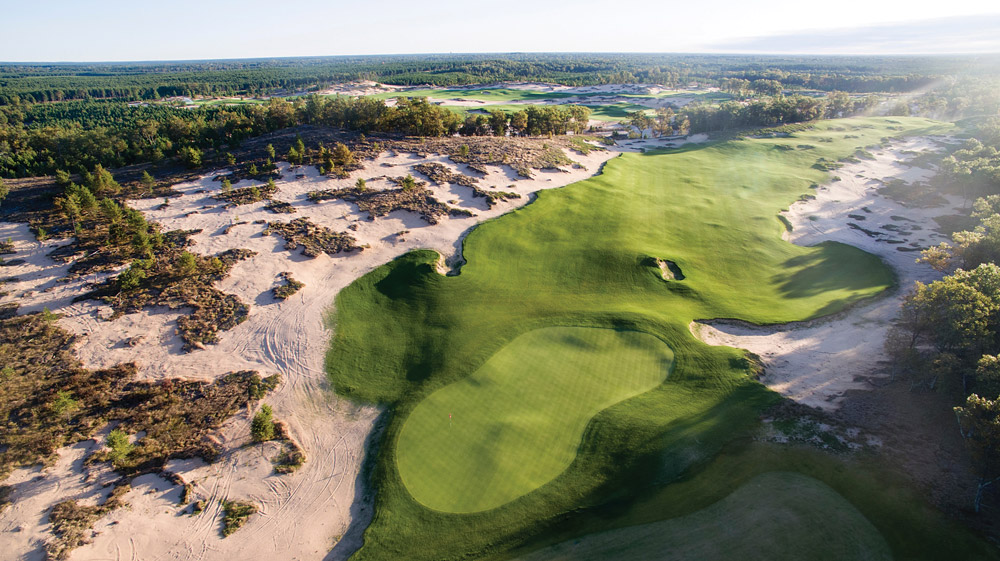 The resort’s namesake course was designed by regular Keiser collaborators Bill Coore and Ben Crenshaw, but for Mammoth Dunes, the developer turned once again to David McLay Kidd, who built the Bandon Dunes course for him in 1999. Since then, McLay Kidd has evolved from designing imposing, difficult courses to creating ones that make the sport more fun and welcoming to average golfers—an approach put on full display at Mammoth Dunes.

In stark contrast to Coore and Crenshaw’s understated Sand Valley course, Mammoth features wide fairways, arresting visuals, and many amphitheater-style greens. It’s pleasing walk through what was once a pine tree farm, whose remnants—along with blown-out dunes and sweeping sandy ridges—frame each fairway. The par-3 eighth hole has received praise for its island-like green surrounded by sand, but the par-3 13th is even better, requiring a tee shot over a ravine. Players have plenty of room to bail out to the left, which most will do, and overly aggressive play is punished by a bunker guarding the back edge. The short par 4 sixth will be drivable for most players, but bunkers to the left and in front guard the horseshoe-shaped green, which is sloped in such a way that from the front right portion of the green, a putt can be rolled all the way to the front left with a good rap.

While Sand Valley Resort—which also recently debuted the Sandbox short course—offers visitors comfortable accommodations and other activities like fishing and tennis, golf is the star, and Mammoth Dunes shines brightest.