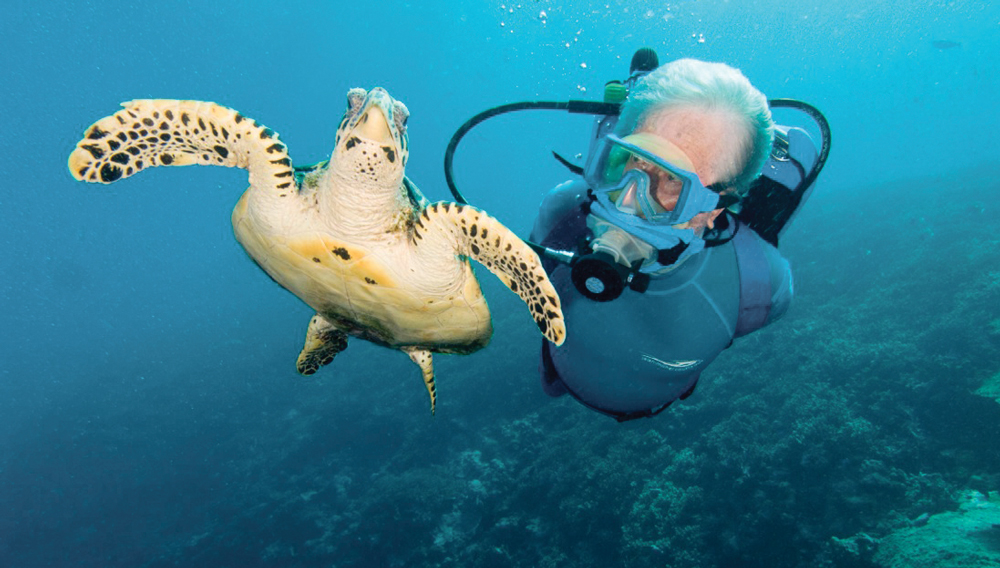 Petit St. Vincent pairs up with an oceanic icon to offer a deeper connection to the sea.

The tropical sun pierces through the crystalline Caribbean Sea and cascades in a stagger of rays, illuminating Jean-Michel Cousteau in an underwater spotlight. The French oceanographer—and eldest son of Jacques Cousteau—is sticking his head inside a giant barrel sponge along the Mayreau Valley reef, some 50 feet below the surface. Moving on from the spectacle, he stops at 60 feet to pose for a photo with a trio of fellow divers before descending deeper among the reef’s sea rods and tube corals.

I had met Cousteau an hour earlier on the shores of the private-island resort Petit St. Vincent. “My name is Jean-Michel Cousteau,” he said upon shaking my hand. “I’m a diver. My father pushed me overboard when I was 7, and I’ve been diving ever since.”

To be sure, watching the 77-year-old environmentalist twirl in and out of the Mayreau Valley’s sculptural reefs is much like admiring a swimming fish. Cousteau shares his underwater expertise at the two dive centers he operates, the newest of which resides at the 115-acre Petit St. Vincent, or “PSV” as it is known to regulars. (The other center is in Fiji.) The island resort, which is in the Saint Vincent and Grenadines chain, opened its Jean-Michel Cousteau Diving Caribbean facility in November within a newly renovated dock house. The center presents novices and experts alike the opportunity to dive with marine biologists, naturalists, and, from time to time, Cousteau himself.

Much like Cousteau’s center in Fiji, the PSV facility places a strong emphasis on ocean conservation. This focus is in keeping with island-wide environmental initiatives that include harvesting rainwater and bottling drinking water in reusable glass rather than plastic. “I want this island to be a jewel that’s polished to a high shine forever,” says Phil Stephenson, a Washington, D.C.–based financier who purchased PSV in 2010 and spearheaded a four-year makeover of its 22 luxury cottages, restaurant, and spa. After traveling with Cousteau, Stephenson convinced the explorer to set up shop on the island as well.

“I’m not going to say we’ve got the best scuba diving in the world,” Stephenson says. “But with the new Cousteau diving center, we’re the best place to take your family to learn about the environment and learn to dive.”

Back on the surface of the water, rocking in the center’s sleek 39-foot L’Aventure, Cousteau confirms that learning is an essential component of the program—and of ocean conservation. “My father used to say, ‘People protect what they love,’ ” he says. “But I used to ask, ‘How can they love what they don’t understand?’ That’s why you’ve got to keep diving!”