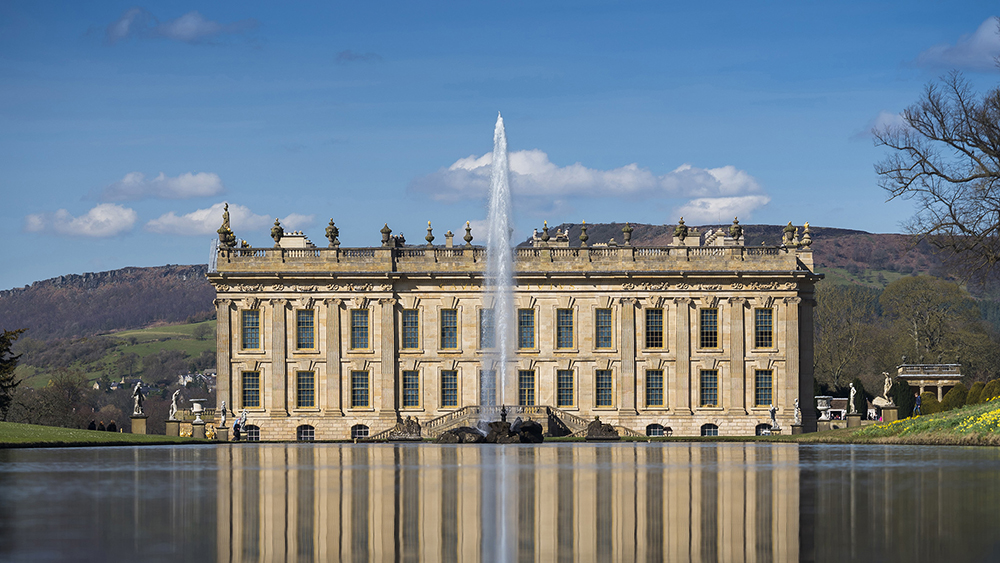 Amassed over 16 generations, the collection of art, furnishings and other heirlooms at Chatsworth House, the home of the Duke and Duchess of Devonshire, is one of the most impressive in the United Kingdom. To celebrate the 275th anniversary of Sotheby’s, which recently reopened its New York galleries, 45 pieces from the estate—some from the private quarters of the Duke and Duchess, others from the archives—were curated for a one-time, special exhibition: Treasures from Chatsworth.

Showcased in an immersive multimedia display by David Korins, the mastermind behind the set design for Hamilton, the objects, which range from a 19th-century diamond tiara and midcentury artwork to modern furniture and even Leonardo da Vinci’s Leda and the Swan, reflect the collection’s history, depth and ultimately its modernity.

We toured the exhibition with the Duke and ask him a bit more about the sharp eye the Cavendish family has for collecting, his personal connection with the pieces on display and his plans for the future of Chatsworth.

How do you decide on what goes into the collection and how to expand it?
It’s quite organic. Typically, we bump into a piece, fall in love, and then try to acquire it. There’s a wonderful example here—the painting by Gainsborough of Duchess Georgiana. They made a film called The Duchess about her. It was not at Chatsworth until about 20 years ago. It came up for auction, and the charity that runs Chatsworth—the Chatsworth House Trust—bought it. It was a historically interesting picture for the collection.

My father, my son, and I also put some of our own money into what we call the “art purchase fund.” If something comes along—either contemporary or old—that we all agree we should try to buy, we use that fund for the purchase.

What are some of the most impressive pieces on display?
Undoubtedly the drawings—we have Van Dyck, Rembrandt, Rubens and of course, Leonardo da Vinci’s Leda and the Swan. These were acquired in about 1712 by the second Duke. In a lot of the drawings, you see an F in the lower right-hand corner. That is for Flink, and Flink had a very important collection, which the Duke acquired.

When the Duke bought them, the pieces weren’t new. Much of the art my family bought was new with the paint wet. People often forget about that, they think “Oh, that’s just old.” but everything that is old was new once.

There are some seriously fabulous tablewares here. How often do you actually use them?
We have a beautiful wine cooler on display, made in 1718 for a branch of the family with the last name Boyle. It’s always on display for visitors at Chatsworth, but the last time we used it, it actually functioned as a baptismal font to christen various grandchildren!

The Vicar performing the baptism came to us saying that he wanted something big for the ceremony. He said “Haven’t you got a bowl?” and so we brought a rather small bowl. And then he said “No, come on!” and then we showed up with this. That was fun!

There isn’t just art and sculpture here, but also fashion. Can you tell me a bit about the Peeress Robe?
This was made toward the end of the 19th century, and my Mother wore it in the present Queen’s coronation in 1953. There’s a picture of her wearing it with me standing beside her as a pageboy.

We went in a carriage to Westminster Abbey. The carriage was driven by coachmen from the brewery near Chatsworth, but they didn’t know London, and they got badly lost. My father got increasingly agitated, because he didn’t want to be late, and there was no way to communicate back then. Thankfully we arrived on time.

But then we finally got to Westminster, my father got out first, and there was a terrible tearing noise—my sword had got caught in the lining of his outfit. That wasn’t great.

Thankfully, immediately somebody came with a needle and thread. They anticipated that people wearing a lot of old clothes would sort of fall to bits.

What’s next for Chatsworth?
We want to create opportunities for visitors to engage with the estate beyond just looking at it. Perhaps spend a day with the conservation team or with the gardeners learning how to arrange flowers. We do some of that already, but it will increase.

We’re big admirers of Biltmore Estate in Asheville, North Carolina. We think that they are wonderful the way they look after visitors and display what they have. The way they treat everybody is as though they are a guest of Mr. Vanderbilt. Brilliant!

Biltmore is open all through the year, and they have various activities around the property. We will be thinking about how to develop different bits of our parkland—make it a place where people can do different things.

And inside our house—in the Victorian wing—we want to restore what were once the kitchens and servant spaces, so visitors can see how the house was operated once long ago.

Peregrine and Amanda Cavendish, the current Duke and Duchess of Devonshire.  Jo Broadhead

Are you still impressed by the estate?
You know, we have about 600,000 visitors every year, and we wanted to know why. We thought it was the collection, the architecture, the house. The single most popular reason people visited was the landscape.

And that landscape, a lot of it by Capability Brown, all of us we have taken for granted—a bit like oxygen, because it’s there all the time!

But the estate is incredible. When I come around the road and see the view, it still makes me think how amazing it is. You can’t not be blown away by it.