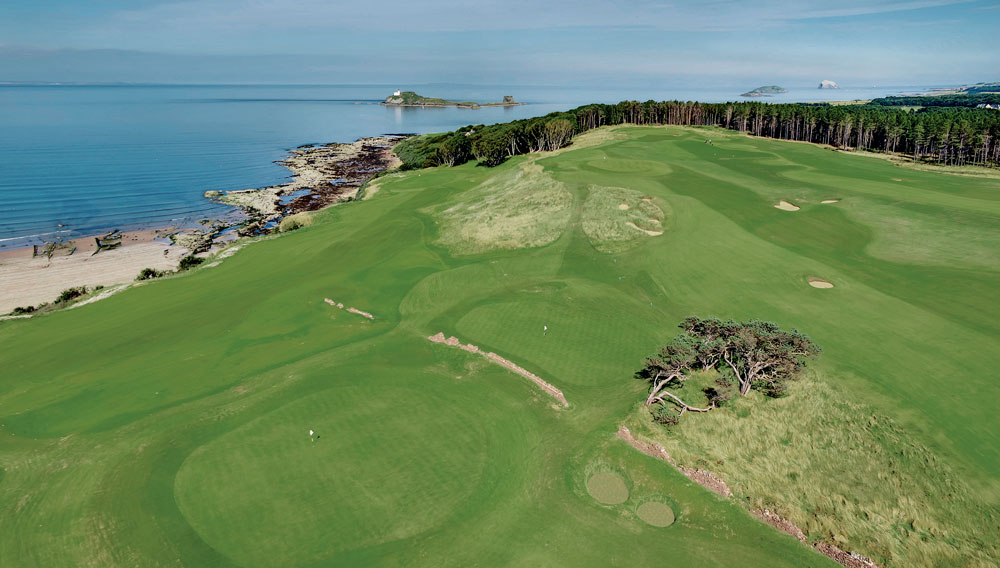 Scotland’s East Lothian region is rightly referred to as the country’s Golf Coast. The windswept stretch of Caledonia—located about a half hour east of Edinburgh—is home to more than 20 courses, including such treasures as Muirfield, Gullane, and the world’s third oldest club, North Berwick. The game was first played on this headland course in the middle part of the 17th century, and the keen breeze that blows off the Firth of Forth has been baffling golfers there ever since.

East Lothian’s dense collection of high-caliber courses—Muirfield, Gullane, and North Berwick are all within a 5-mile stretch—also includes a few notable newcomers. Archerfield Links Golf Club opened in 2004 with two formidable courses, and just next door, the Renaissance Club made its debut in 2008 with an epic layout by the American architect Tom Doak. Last fall the latter club cracked open its doors to nonmembers with the introduction of its One Time Experience, an offering that allows guests to play the private course and stay at its newly built clubhouse for as long as a week. The program provides visiting golfers with an ideal base for exploring East Lothian’s elite layouts, among which Doak’s Renaissance design has quickly established itself as a worthy member.

Doak, who spent a year after college living and working at St. Andrews, was at first wary of building a course on the 300-acre coastal site. “To be honest, I was concerned that people’s expectations for a course between Muirfield and North Berwick would be impossible to meet,” he says. “However, I warmed to the idea once I remembered that the Scots would appreciate the course for what it was.”

Doak recently returned to the Renaissance Club to build three new holes on land that previously belonged to the Honourable Company of Edinburgh Golfers, also known as Muirfield. The additions include a strong par-3 ninth hole that plays to a green framed by the Firth of Forth. “When you arrive at the green, the vista around the point to Fidra lighthouse comes into view when you don’t expect it,” says Doak, referring to a landmass that was said to be the inspiration behind Robert Louis Stevenson’s Treasure Island.

The club has turned the original three holes into a practice loop and an expansive academy area and driving range. The remaining 15 holes play around a pine-and-sycamore-studded coppice and feature large contoured greens, fescue-lined fairways, and riveted humpback bunkers. The remnants of ancient boundary walls run alongside four of the holes, including the 18th, and enfold the imposing three-story clubhouse.

Completed in 2013, the clubhouse offers 24 well-appointed guest suites, a spa, a gym, a fine-dining restaurant, a bar, and a billiard room. In addition to arranging rounds at the Renaissance Club, the clubhouse staff will help secure starts at Muirfield, North Berwick, and other legendary East Lothian layouts.