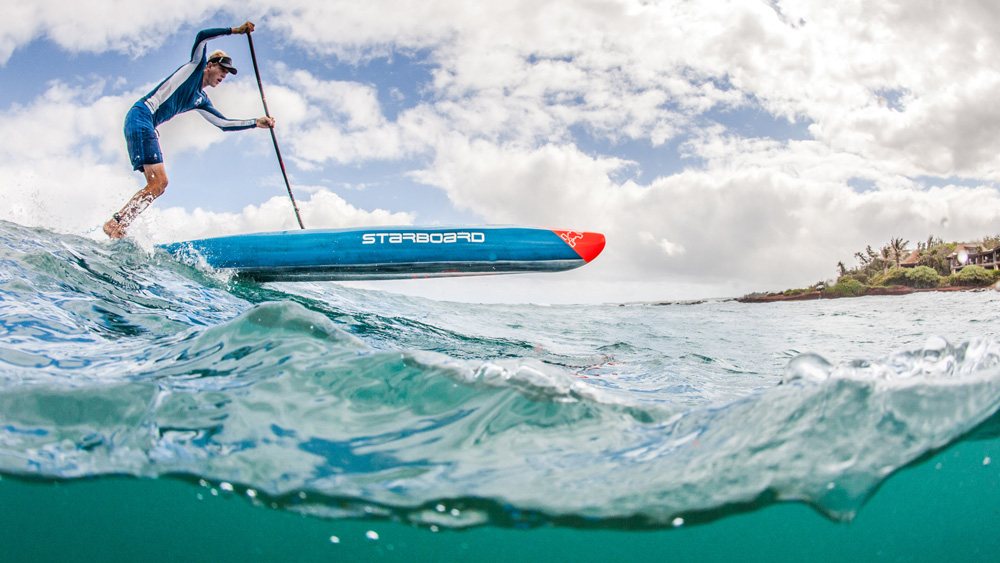 One of the top stand-up paddleboard (SUP) manufacturers in the world, Starboard has revealed details about the boundary-pushing design of its 2018 All Star racing board. Conceived with input from world-class athletes and industry-leading board shapers under the direction of Svein Rasmussen—Starboard’s founder and chief innovator—this recent iteration is the spectacle of the season.

The new high-performance board is even faster than the previous All Star, which earned the Gear of the Year 2017 award from stand-up paddle board magazine Supconnect. It is so much more efficient that after 50 paddle strokes, the new board will be two-to-three board lengths ahead of the 2017 version. This can be attributed to the nose volume, which has been enhanced for downwind surfing and better performance in choppy waters, giving the rider better control and more pop. Two parallel rails reduce rolling (helping to prevent a capsize), while the beveled side planes of the hull help to the board the brand’s most stable yet. Those taking it straight to the waves will notice a flatter and more concave tail for a solid stance while paddling through the break.

“The All Star is all-around the best board. This is what I’m going to be using for Carolina Cup, Pacific Paddle Games, and Hood River,” preaches Connor Baxter, the 2014 SUP Race World champion and a Dream Team Starboard member since the age of five. Connor played a key role in testing out the board’s capabilities, resulting in continual remodeling and alterations in pursuit of the ultimate SUP. An impressive lineup of athletes, including sponsored SUP riders Izzi Gomez and Michael Booth, are on the brand’s athletic team and will be using the new boards during the next season, a testament to the quality and innovation that the brand stands behind. But the All Star is just as well suited for entry-level riders as it is for elite racers.

Just like the 2017 version, riders can choose between Hybrid Carbon or Carbon Sandwich (now sold in an alluring pink in the elite board sizes). The two variations are differentiated by their construction and recommended uses. The Hybrid (priced at around $2,449) is a recreational board for novices with significant flex control and impact resistance. The Sandwich (priced at around $3,779) is designed for racers who want to lead the pack in their next competition, or for those who care less about the championship and more about progressing in this popular water sport. The biggest difference in Sandwich’s construction is its flexibility, made of EPC carbon and high-density PVC for light-weight durability and an efficient flex. The board features technology that creates a propulsion when riders paddle that snaps the board back into the water allowing for rapid speed in tumultuous conditions.

Rasmussen is not only impassioned by the research and development process to create a SUP masterpiece but is an environmentalist in his approach to the manufacturing process. The company’s intelligent anti-plastic packaging system can reduce about 10,000 kilograms of plastic pollution a year and the use of recycled materials in its inflatable boards is a conscious step towards preserving the planet. Debuting this month, the 2018 All Star will be available in a variety of sizes at select retailers across North America.